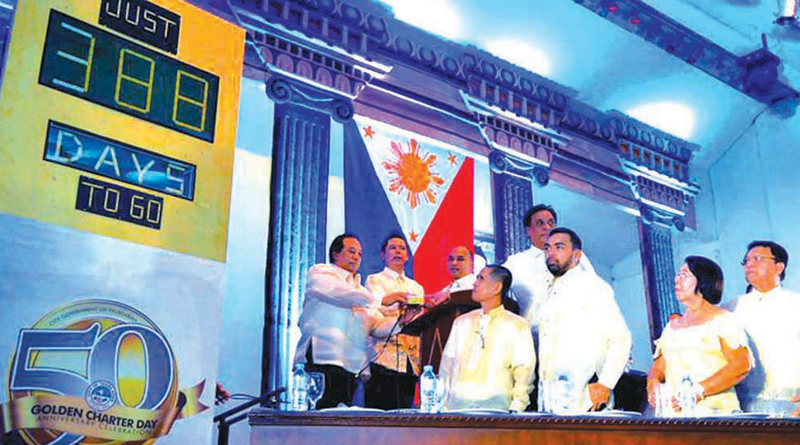 Tagbilaran City will no longer be just the gateway to Bohol, but a destination itself.

Gov. Edgar Chatto announced this in his message during the commemorative program of Tagbilaran Cityâ€™s 49th Charter Day last Wednesday as he noted healthy cooperation between the provincial administration and the city administration now.

Chatto also announced the plan to build the third bridge that will connect mainland Bohol and Panglao island through the Tagbilaran point.

This is to prepare for the increased of traffic flow once the New Bohol Airport starts operation that will increase the tourist influx.

On the part of the city government, Mayor John Geesnell Yap announced in hisÂ state-of-the-city address that the Blood Compact shrine in barangay Bool will be developed further into a Bohol Friendship Park which implementation starts late this year. This will transform the place to a gigantic park which will draw tourists’ appreciation of what Tagbilaran City has to offer, including its rich cultural heritage dating back to the Dapitan kingdom in Bo-ol. The Bohol Friendship Park will become the prime tourist destination in the city where a replica of the Spanish Galleon of Legazpi will be one of the features aside from the amphitheater which will become the venue for cultural shows.

The city will also invite scientists to study the feasibility of a reclamation project that will pave for the development of a boulevard near the port area.

The remaining 50 households as informal settlers will be relocated to a 50-hectare property that the previous city administration purchased in the adjacent town of Baclayon.

On the other hand, it can be noted that after being mentioned in his inaugural speech in 2013, the projection that Tagbilaran can be an information technology (IT) hub had never been mentioned in the succeeding public pronouncements of the mayor.

On this, Yap explained that undertakings are actually ongoing but there has been no public announcement about it to avoid making people expect until itâ€™s realized.

Once Tagbilaran stabilizes internet connection, IT-business process management (BPM) companies would then be convinced to come in.

Yap said he had been going around with Third District Rep. Arthur Yap, presenting Tagbilaran as the future IT-hub to IT-BPM or business process outsourcing (BPO) companies.

The mayor said it had been the common concern of the BPO that there would be at least two telecommunications companies available to be assured of back up internet provider in case one encounters problems.

He also takes pride on the improvement of the business climate in comparison to the previous administration.

The mayor cited transparency and accountability as the main factor that the city administration gained the trust of the business sector.

â€œEmployees who were found guilty of dishonesty such as tampering, non-remittance of collections, cash shortages, and several discrepancies in the disbursement records were meted out with the prescribed sanctions and are no longer connected with the city government,â€ the mayor said.

On the sustainability and efficiency of the road projects, he also assured that every road concreting project will include a drainage system to be reconciled with the drainage system implemented by the DPWH along national roads.

However, in most cases, the city government opted to maximize the allocation to cover longer roads and the drainage component would just have to follow.

The Cityâ€™s Comprehensive Land Use Plan (CLUP) was already submitted to the Committee on City Planning and Public Lands of the 12thÂ Sangguniang Panlungsod for their evaluation, review and public hearing.

The city government rehabilitated 26 different city and barangay facilities through the P116-million allocation from the Bohol Earthquake Assistance (BEA) fund.

Rehabilitation of the New City Hall Building had also started, with the allocation of P78 million from BEA fund.

Under the present city administration, the City Engineerâ€™s Office concreted a total of 19 roads, works on seven projects are on-going.

Other projects in the list are the construction of the drainage of M.H. Del Pilar St. and Lamdagan St., improvement and construction of a box drainage at PeÃ±aflor St. in barangay Booy, while phase 5 installation of the modern street illumination project was also proposed for Graham Avenue and CPG North Avenue.

Bracing against the rise of criminality that usually goes along with economic improvement, the city government boosts the capabilities of the police force by providing 10 M4 rifles, three brand new motorcycles for the Motorcycle Anti-Street Crime Operatives (MASCO), and two brand new police vehicles.

This is in addition to the 51 brand new Glock 9MM handguns that the national government provided.

Rigid police check points have been conducted all over the city, aside from the

Improved tax collection is one of the main accomplishments of the city administration that the Bureau of Local Government Finance commended the City Treasurerâ€™s Office for surpassing the collection targets in all four local sources.

â€œTagbilaran City was ranked No. 1 in the entire Region 7 by the Bureau of Local Government Finance in the category of Collection Efficiency of its Economic Enterprises,â€ he added.

The Department of Interior and Local Government conferred the highly-coveted Seal of Good Financial Housekeeping in 2014 to Tagbilaran City.

The mayor cited in his SOCA that the city government is the â€œonly LGU in the entire Region 7 chosen by the USAID to be a partner in their Cities Development Initiativeâ€.

In the education agenda, Mayor Yap increased the allocation for the city scholarship fund to P4 million and increased the Special Education Fund for infrastructure projects to P7.75 million for the school year 2015-2016.

A total of 43 new classrooms had also been constructed through the city governmentâ€™s various Public-Private-Partnership initiatives.

High-definition CCTVs worth P4 million had been installed in identified public schools.

The mayor also said the city government will construct a model day care center in the future, provide air-conditioning units to all the 34 day care centers in the city, and had also provided tuition fee subsidy to 606 college students and produced 215 graduates out of them.

One of the city scholar, Ladie Lyn Fuderanan, was awarded as one of the top 10 criminology students in the entire country.

For other social services, the city government processed the purchase of an ultrasound and an x-ray machine.

Total renovation of the City Health Office had also been undertaken through the partnership between the city government and SM and BDO Foundations.

Moreover, the City Health Birthing and TB Dots clinic will soon be completed, according to the mayor.

The city government is also constructing the â€œPaglaum Centerâ€ that will cater to Children in Conflict with the Law (CICL), a 249-square-meter in barangay Cabawan.

It has a waiting area for visitors, office space for the Social Welfare personnel including a psychologist, a multi-purpose area, infirmary room, sports facilities, and prayer room.