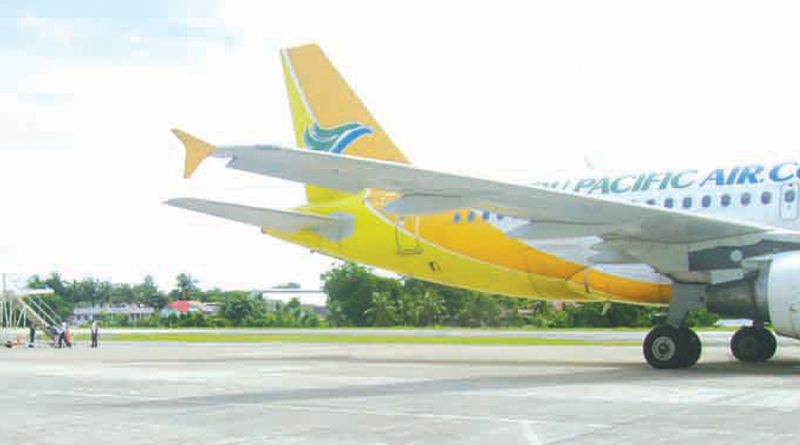 All ten flights last Sunday from Manila were cancelled after a PAL plane got stalled at the tarmac of the Tagbilaran City Airport after it developed oil leak in its engine. The cancellation of flights continued until Monday morning with two flights from Manila off their regular schedule..

DOTC Sec. Jun Abaya was sought of his immediate action after the one-plane policy caused the cancellation of flights. Had it not been upon the intervention ofÂ  Rep. Rene Relampagos and Gov. Edgar Chatto, flights to Bohol from Manila could have remained cut off.

Chatto and Relampagos, together with other officials who had to fly Manila last Sunday to attend the Liberal Party gathering on Monday, were among those affected by the cancellation of flights.

They opted to take a fastcraft to Cebu and left for Manila from Mactan-Cebu International Airport to be able to catch up with the schedule.

Over a thousand outbound and inbound passengers had been stranded starting the last flight back to Manila on Saturday until the first three flights on Monday.

Aside from the waiver, CAAP also issued a Notice to Airmen (NOTAM) that of 8:14 a.m. of October 5, the Tagbilaran Airport would be allowed to accommodate aircrafts from Manila.

Airlines plying the Manila-Bohol-Manila route were also furnished with the NOTAM.

Mario Veloso of the Control Tower of the Tagbilaran Airport explained that in the light of the Notice to Airmen, the stalled PAL aircraft had to be moved 10 to 15 meters from the landing bay.

This means, Airbus 320 aircrafts are allowed to land and park at the Tagbilaran Airport even with the stalled PAL aircraft occupying an area of the tarmac.

This is amid the one-place policy of theÂ International Civil Aviation Organization.

PAL maintenance technicians and mechanics found leak in the oil tank of its stalled Airbus 320 and it might take even beyond Wednesday to be fit to fly again.

The NOTAM advisory serves toÂ inform â€œaircraft pilots of potential hazardsâ€ in the light of the presence of the stalled PAL aircraft at the tarmac of Tagbilaran Airport.

Prior to the NOTAM, Manila-bound passengers from Bohol and Bohol-bound passengers from Manila had been stranded as a stalled Airbus 320 of the Philippine Airlines occupying then the tarmac of Tagbilaran Airport prevented other aircrafts from landing starting Saturday afternoon until it was moved a few meters from the landing bay on Monday morning.

CAAP cancelled all Manila-Bohol-Manila flights on Sunday, considering that with the one-plane policy, no other aircraft can land when one aircraft is occupying the landing ramp at the airport.

Tagbilaran Airport Control Tower Supervisor Antonio Pergamino confirmed that the PAL aircraft with call sign, AirPhil 2777 from Manila still managed to land at around 4:01 p.m. onÂ Saturday, but due to some technical problems, its return flight to Manila with call sign AirPhil 2778 at around 5 p.m.Â that dayÂ was cancelled.

PAL technicians arrived later at the night and continued the repair on the stalled aircraft until the morning.Â  Another rescue aircraft bringing avionics arrived atÂ around 5 p.m.Â Sunday, according to Pergamino.

Cancelled flights have been the recurring problem at the Tagbilaran Airport everytime an aircraft is stalled at the tarmac for technical problems.

This is in the light of theÂ limited space at the Tagbilaran Airport that is under the one-plane policy of ICAO.

An emergency ramp is under construction to address this problem.

However,Â the completion of the emergency ramp at the Tagbilaran Airport has been delayed further because of the recent rains that prevented laborers from proceeding with the civil works.

The contractor, CB Garay Philwide Builders, at first targeted to finish the project by the end of September, but it was not met because of the bad weather.

Engr. Loreto Nemesio, the project site engineer of CB Garay Philwide Builders, they had moved the deadline to the second week of October.

If the weather would be fine, they would be able to meet the new deadline, according to Engr. Nemesio.

He said what isÂ left to finish is the curing of the cement the emergency ramp. The said ramp can be used at the end of this month.

Just last week, an aircraft of Air Asia had been stalled at the Tagbilaran Airport and paralyzed again the other flights of the day.

Affected businessmen and some tourists blamed the bureaucracy for the delay in the transmittal of the waiver and the NOTAM, to which the delay of the resumption of the flights had been attributed to.

Chatto and Relampagos sought the intervention of Department of Transportation and Communications (DOTC) Sec. Jun Abaya regarding the problem right then.

Indeed, as of around 10 p.m. on Sunday Relampagos already relayed that PAL managed to secure a waiver to be allowed to resume flights, but it was only at around 8:14 a.m. that CAAP in Tagbilaran obtained a copy of the NOTAM.

With an average capacity of 160-170 passengers for an Airbus 320, around 1,000 travellers have been affected already from the three flights held, excluding those in the eight inbound and eight outbound flights the whole day on Sunday and the last trip to Manila on Saturday.

Relampagos said Bohol had been seriously affected by the domino effect from the recurring problem of inevitable cancellation of flights everytime an aircraft is stalled at the Tagbilaran Airport tarmac.

However, it is now a matter of time that the Tagbilaran Airport could be spared from the one-plane policy of ICAO once the emergency ramp is finished, Relampagos concluded.