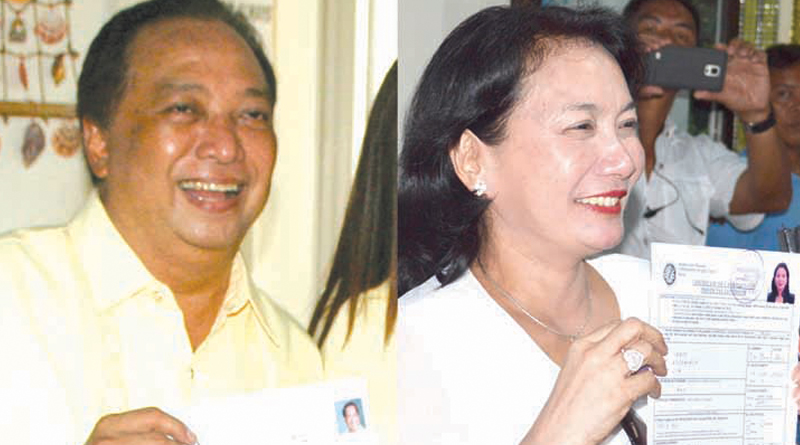 With the filing of the certificates of candidates over last Friday, the political landscape in the province shaped up with several town mayors jumping to other political parties for convenience especially on getting their Certificate of Nomination and Acceptance (CONA).

Meanwhile, a late decision to run for governor surprised the ruling party of Gov, Edgar Chatto when out of the blue, Loay Mayor May Imboy declared to run as an independent bet against Chatto, triggered after she failed to be issued the CONA of the ruling LP. Aside from Chatto and Imboy, three other filed their COCs for governor, namely, Kary Balagosa (Partido ng Masang Pilipino- PMM) and Wenceslao Garcia and Cipriano Gaudicos of the Kilusang Bagong Lipunan (KBL).

Chatto is consistent in taking his running mate, re-electionist Vice Gov. Concepcion Lim who will defend his post against hisÂ  Senior Board Member Dionisio Balite as her running mate under PDP-Laban.

The crack of the ruling party came after last termer 3rd district Rep. Arthur Yap (NPC) drew battle lines with mayors in his district who joined the group of former Carmen Mayor Cheche Toribio de los Reyes(PDP-Laban). De los Reyes who run and lost in her gubernatorial bid during the last election is hell bent to grab the seat from Yap in next year’s election.

After bolting from the ruling party, either the vice mayors or new comers emerged to opposed the incumbent mayors. In Batuan, Vice Mayor Antonio Jumawid, Carmen, Vice Mayor Pedro Budiongan, Jr., Pilar, Vice Mayor Wilson Pajo, Sierra Bullones, Vice Mayor Alfredo Gamalo, Garcia Hernandez, Vice Mayor Miguelito Galendez.
De los Reyes, known to have the logistics to fuel his campaign has been “buying” the political leaders who used to be loyal to Yap, including several barangay captains.
Yap who is running under the LP-NPC coalition slate got the ire of the LP mayors who were not issued their CONA from the ruling party. These mayors who flew to Manila last Sunday to question the holding of their CONAs composed the core group of those who started to endorse Loay Mayor Imboy to run for governor. The mayors escorted by De Los Reyes and former Loboc Mayor Leon Calipusan personally sought personal audience with businessman Jun Lim of Lite Shipping Co., brother of the lady mayor to get the former’s blessing on the proposed gubernatorial bid.

Reliable sources toldÂ The ChronicleÂ that the political decision of the mayor was not well receive by the Lim family. However, congressional bet De Los Reyes offered substantial budget for the campaign kitty.

Relampagos running for his last term has two opponents, Crescencio Alturas (PDP-Laban) and Joahna Initay (UNA). The two opponents, Relampagos said could be a strategy for a possible substitution since they belong to two major political parties, Substitution is allowed until Dec. 20.

For his part, Aumentado’s lone opponent is Board Member Gerardo Garcia (NUP) who filed his CONA barely few minutes before the closing of last Friday’s deadline.

Meanwhile, the complete list of mayoralty and vice mayoralty bets in Bohol’s 47 towns are printed elsewhereÂ  in this issue.