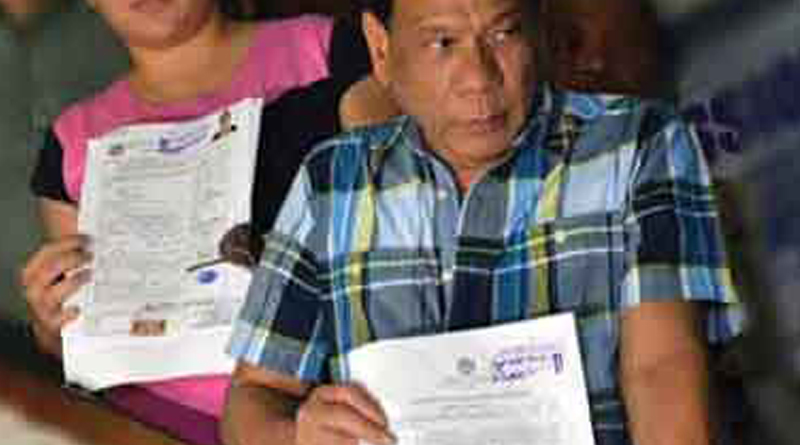 Boholanos maintain their support for Davao City Mayor Rodrigo Duterte’s presidential bidÂ the day after he filed his certificate of candidacy (COC) with the Commission on Elections in Manila.

In a random survey conducted yesterday by the weekly radio programÂ “Radyo Merkado”of dyRD, Duterte showed a remarkable 68 per cent in favor of his decision to run for President in next year’s election.

Meanwhile, the better option is not to have a running mate for Duterte, and instead leave both Sen. Allan Peter Cayetano and Sen. Ferdinand “Bongbong” Marcos to support his candidacy, according to Maribojoc Mayor Leoncio Evasco who is reported to be Duterte’s choice as campaign manager.

Evasco who has been with Duterte since his first term as Davao mayor way back in 1988 toldÂ The ChronicleÂ yesterday that Duterte is confident that the Comelec will find his COC in order as it has the CONA signed by Salvador Ty, vice president of PDP-Laban. The filing of his candidacy was also supported with the withdrawal of the Martin Dino, the original presidential candidate of PDP-Laban.

Evasco who was in Davao City yesterday said Duterte’s decision to file his candidacy for President came after his daughter, Sara agreed to run as her father’s substitute in the Davao mayoralty race.

Attached to Duterte’s COC filed last Friday were the CONA, a statement of his platform of government and an authorization letter for lawyer Salvador Medialdea to file his COC with Comelec Manila while Duterte was in Davao to personally withdraw his CONA for city mayor in favor of his daughter, Sara.

However, Comelec Commissioner Chairman Robert Lim has issued a statement that Duterte’s COC needs to go through deliberation by the full commission citing that “receiving his COC was a ministerial function of the Commission, but this has to be elevated by the law department to the commissionÂ  en banc.” Lim said the Comelec needed to determine whether the requirements for candidate substitution has been met.

Evasco said he has been in Davao busy finalizing the setting up of their campaign team and the organizational structure of the Duterte machinery for a nationwide operation. Asked when their friendship with Duterte started, the MaribojocÂ  mayor recalledÂ  it was during his incarceration as an activist with Dueterte as then Davao prosecutor. He served as Duterte’s chief of staff since the latter’s first term as mayor wayback in 1988.

He said Duterte’s candidacy will be backed up by various groups led by his political party machinery under PDP-Laban. In Bohol, Panglao mayoralty bet Doloreich Dumaluan is the party provincial chairman.

During yesterday’s radio survey, majority of the respondents said Duterte stands out as the only presidential timber who is hell bent to curb criminality.

Evasco toldÂ The ChronicleÂ that the documents filed for Duterte in the Commission last Friday showed that he is running on a platform of good governance, focused on the fight against corruption, drugs and criminality and fixing governmental operations.