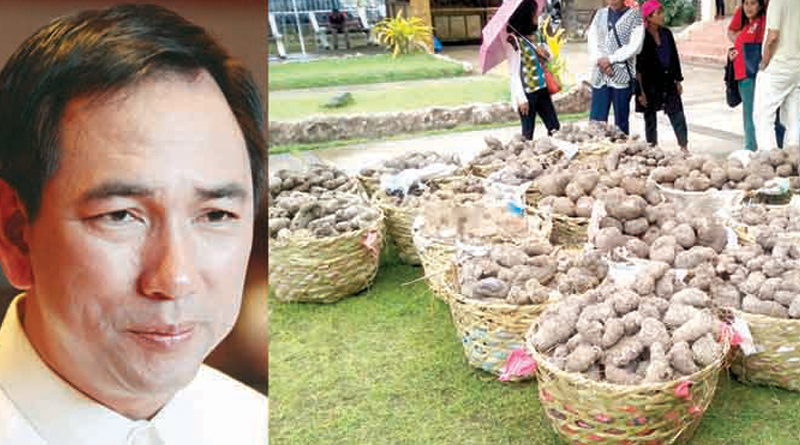 The three-day 16thÂ Ubi Festival showcasing the famousÂ  â€œUbi Kinampayâ€ and other varieties of Ubi in Bohol will start today at Plaza Rizal, this city.

With the theme,Â â€œIndustriya sa Ubing Bol-anon Ipadayon, Taliwala sa Hulga sa Nagkausab nga Panahon,â€Â the festival will have the Ubi Cuisine contest tomorrow which will showcase on the best food andÂ dessertÂ  using Ubi in their ingredients. The various top resorts and restaurants will participate in the Ubi contest at theÂ BoholÂ Cultural Center tomorrow.

The three-day festival will kick-off this morning with a motorcade from theÂ Office of the Provincial Agriculturist, Capitol Annex Building, DaoÂ DistrictÂ  to Island City Mall (ICM) passing through J.A. ClarinÂ St.Â to theÂ  Bohol Cultural Center for the opening program.

FormerÂ energy secretaryÂ Jericho Petilla who, himself, is aÂ fanÂ of Ubi will be the keynote speaker during today’s opening program.Â  He will be introduced byÂ ProvincialÂ Board Member Abeleon Damalerio, chairman of the committee on agriculture of the Sangguniang Panlalawigan.

Key officials from the national, regional, provincial, and Municipal Local Government Units (MLGUs) will grace the series of activities during the three-day festival.

Chatto will also administer the oath-taking of the officers of the Regional Organic Agriculture Confederation (ROAC) Bohol Chapter, and the Bohol Gardeners and Lanscapers Association.

The ribbon-cutting and the opening of exhibits on Ubi, Endemic Rootcrops and Sustainable Agriculture Products will be done at the Plaza Rizal right after theÂ  program at the Bohol Cultural Center.

Tomorrow (Thursday) will be the main event which is the Ubi Cuisine contest to be sponsored by the Bohol Association of Hotel and Restaurant (BAHRR).Â  Likewise, the Literary Musical Contests for Balak, Kuradang, Rap and Jingle, and Bugno sa Rondalla will be conducted at Plaza Rizal.

The closing and awarding program will be done on Friday afternoon right after the Technology Updates on Ubi and other Rootcrops which is scheduled at 1 to 3 p.m.Â Â (Atoy Cosap)