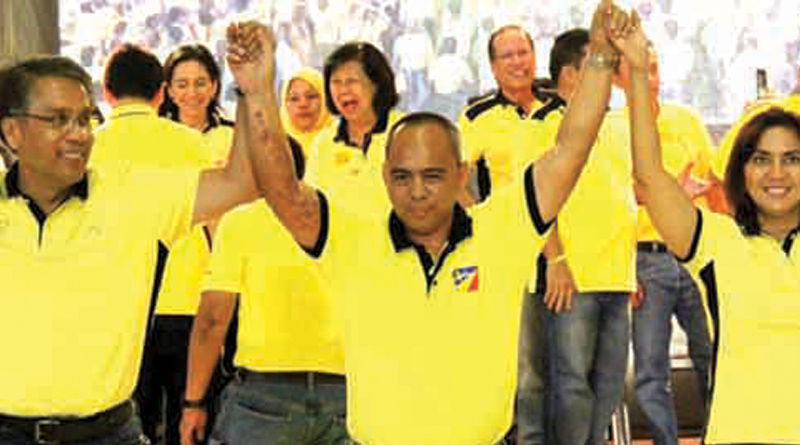 Roxas and Robredo raised the hands of Board Member Gerry Cutamora Garcia as the bet of the LP-led coalition in a multi-sectoral assembly in Talibon, the very birthplace of his grandfather and only Boholano president.

The 50-year old BM Gerry Garcia is the son of the late Jaime Garcia, a nephew of the late Pres. Carlos P. Garcia who worked as one of the utility men in Malacanang during Garcia’s presidency.. He belongs to the Garcia political clan, his father havingÂ  served as a municipal councilor of Pres. Garcia town (formerly Pitogo). Their family hails from Talibon town, the birthplace of the late Pres. Garcia.

Garcia’s proclamation as LP’s congressional bet was made in the presence ofÂ  Pres. Benigno S. Aquino IIIÂ  last Wednesday where a grand rally was staged at the Bohol Cultural Center.

BM Garcia was also proclaimed as LP’s official congressional bet in his hometown witnessed by some 3,000 leaders, supporters including relatives at the Talibon gym.

OtherÂ Daang MatuwidÂ senatorial bets who came along with Roxas and Robredo were Sen. Ralph Recto and Joel Villanueva.

In his brief remarks, Garcia cited the Talibon leadership of Auxtero, who reported in the multi-sectoral assembly the accomplishments of his town, including the LGUâ€™s first-ever Seal of Good Local Governance and Seal of Good House Keeping from the Department of Interior and Local Government (DILG).Â (Pilo Cajes)