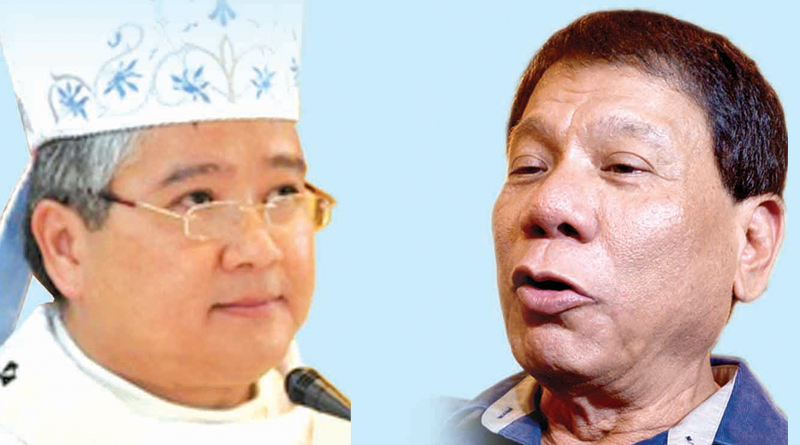 A pastoral letter of the Catholic Bishops Conference of the Philippines (CBCP) issued last Sunday, even without mentioning the candidateâ€™s name, exhorted the faithful not to vote for presidential frontrunner Davao City Mayor Rodrigo Duterte.

â€œThe desire for change is understandable. Our people have suffered from incompetence and indifference,â€ said the letter signed by Archbishop Socrates Villegas, president of the Catholic Bishops Conference of the Philippines. â€œBut this cannot take the form of supporting a candidate whose speech and actions, whose plans and projects show scant regard for the rights of all, [and] who has openly declared indifference if not dislike and disregard for the Church, especially her moral teachings.â€

The letter, was the strongest condemnation yet of Duterte, who has been linked to the extrajudicial killings of criminal suspects.

In its pastoral letter,Â CBCP called on the electorates to â€œdiscern (their) choicesâ€ of candidates for the elections on Monday.

In its pastoral letter titled â€œProphets of Truth, Servants of Unity,â€ CBCP Archbichop Villegas saidÂ Â â€œWe encourage you to pray the rosary every day and receive Holy CommunionÂ starting May 1 until May 9. In this novena of rosaries and Masses, we claim from the Lord the gift of a godly electoral process. With the permission of the bishops, the Blessed Sacrament may be exposed for public adoration to beg the Lord for the gift of peaceful elections.â€

According to him, the Catholic Church has never asked any political candidate to seek its endorsement.

â€œBut the Catholic Church has always demanded of Catholic voters that they cast their votes as an act not only of citizenship but also as a public declaration of faith.Â  We ask this most earnestly of all of you, Catholic brothers and sisters, in the forthcoming election,â€ Villegas said.

The CBCP president , in his pastoral letter, gave the bishops of the various dioceses the option on how to disseminate the message regarding the way to choose the right leaders in the coming election.

For his part, Bishop Leonardo Medroso of the Diocese of Tagbilaran toldÂ The Chroniclethat it is â€œenough to guide the electorates on the basic principles governing the leaders whom we want to elect. The bishop urged the voters to evaluate the candidates on their â€œmorality, integrity and their qualities to be leaders of this nation.â€

The electorates are â€œnot like children, but areÂ Â matured peopleâ€ who knows how to elect their leaders, Bishop Medroso said.

Msgr. Abet Uy, vicar general of the Diocese of Talibon toldÂ The ChronicleÂ that the gist of the pastoral letter will be reechoed by the clergy as the CBCP pastoral letter â€œspeaks for itself.â€

The CBCP pastoral letter also asked for the people to bend their knees in fervent prayer.

The parishioners are asked to say their novena of rosaries and Masses as they would â€œclaim from the Lord the gift of a godly electoral process.â€

â€œWith the permission of the bishops, the Blessed Sacrament may be exposed for public adoration to beg the Lord for the gift of peacefulÂ Â elections.â€

â€œHe told the candidates: â€œPray! Pray not only to win but pray that the Lord may show by His signs His chosen leader for this nation, this nation who calls on Him at the crossroads of its national life.â€

Meanwhile,Â Â a detailed report of the Philippine Daily Inquirer revealed thatÂ Â several religious congregations all over the country have sought divine intervention as they turned to prayer and fasting in the run-up to the national and local elections as contained in yesterdayâ€™s PDI banner story â€œNuns all over PH pray for divine intervention.