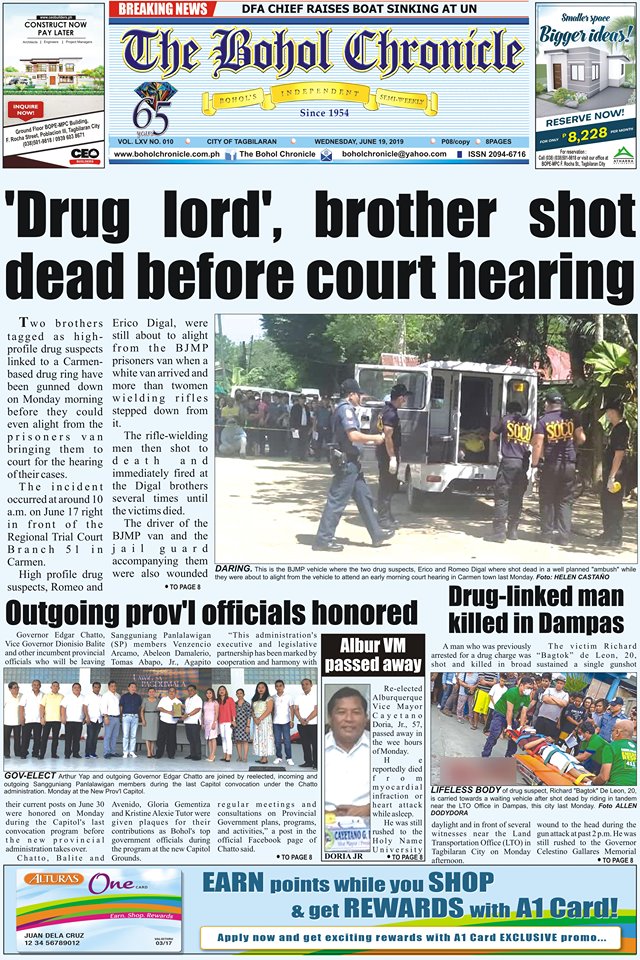 Two brothers tagged as high-profile drug suspects linked to a Carmen-based drug ring have been gunned down on Monday morning before they could even alight from the prisoners van bringing them to court for the hearing of their cases.

The incident occurred at around 10 a.m. on June 17 right in front of the Regional Trial Court Branch 51 in Carmen.

High profile drug suspects, Romeo and Erico Digal, were still about to alight from the BJMP prisoners van when a white van arrived and more than twomen wielding rifles stepped down from it.

The rifle-wielding men then shot to death and immediately fired at the Digal brothers several times until the victims died.

The driver of the BJMP van and the jail guard accompanying them were also wounded by stray bullets.

Romeo and Erico were related to Armando Digal, another high-value drug suspect who used to be the driver of Erico.

Erico led the Digal drug group and became a priority target in Bohol.

The composite police team confiscated two “bulto” size of shabu worth of P59,000 and several other packs of shabu- -all valued at P118,000 worth, and bundles of cash amounting to P1.4 million during the raid.

The police officers also confiscated a .38-caliber revolver loaded with six .357 ammunition, a fragmentation grenade, and a rifle which turned out to be an Airsoft gun that resembled an M4 rifle.

At that time, only Romeo, the younger brother, was chanced by the composite team of law enforcers as it was believed that Erico had already left to another country.

Erico was later arrested on April 4 last year at Anuling Lejos 2 in Mendez, Cavite by virtue of a warrant of arrest issued by then RTC-Branch 51 Judge Patsita Sarmiento-Gamutan (now retired) in relation to charges of illegal possession of firearms and illegal drugs.

Erico then reasoned out that he had been undergoing rehabilitation while in Cavite and it was the reason that he was not in Carmen when their ancestral house was raided.

Erico was listed at no. 5 on the list of high-value target drug personalities of the Police Regional Office (PRO)-7.

First, he became a priority target in Bohol and later leveled up to becoming a regional high-value target in Central Visayas.

His relative and former driver, Armando, also became controversial inside the Bohol District Jail after his wife squealed that he (Armando) was still able to contact her through cellphone while inside the jail.

The former wife said the detainee had been threatening her and felt harassed by his text messages.

Armando was intercepted by the NBI-Bohol team in an operation on June 7, 2015, in barangay Jimilian, Loboc.

According to NBI-Bohol, Armando was a jobless resident of Poblacion in Sierra-Bullones and only made it to high school level.

During the operation, the NBI team confiscated five medium-size sachets of shabu and another pack of shabu in a big sachet with estimated weight of11.3421 grams and an estimated value of around P200,000 from him.

He was charged for violations of RA 9165 based on section 11 under Article 11, and Republic Act 10591 or the New Firearms Law under sections 28 and 32 in relation to the Comelec gun ban.