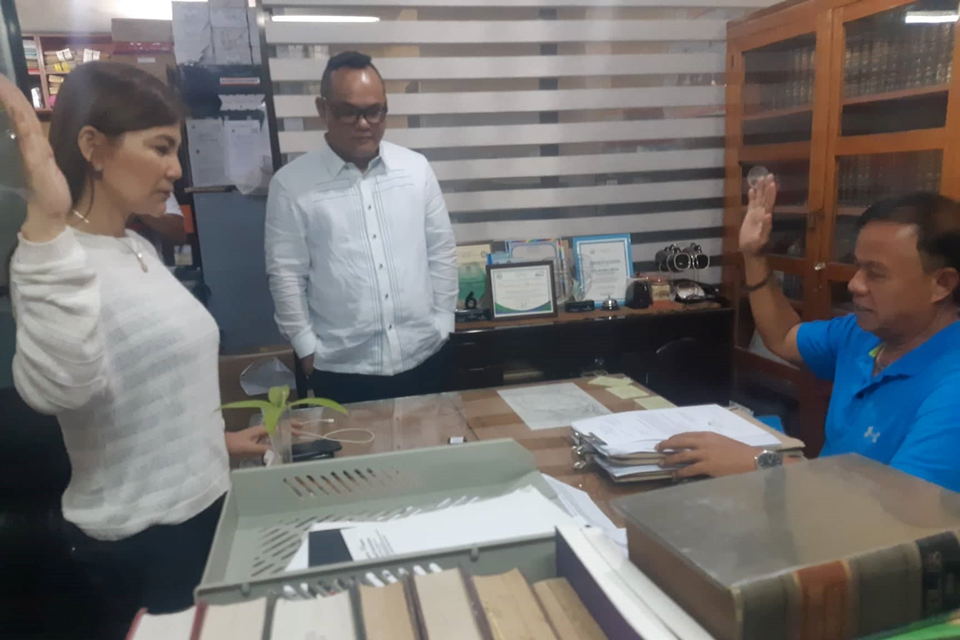 Dauis Mayor Marietta T. Sumaylo slapped a P33.5 million damage suit against an alleged pseudo-writer which she identified as Romulo Rowenlo Bayron a.k.a. Rowenlo Bayron before the Provincial Prosecution Office (PPO) of Bohol.

Refusing to wilt despite repeated unsavory articles against her reputation and her family posted on Facebook as “The Bol-anon Chronicle” filed the multi-million libel suit on September 12, 2019, after Bayron failed to appear before the National Bureau of Investigation Bohol District Office (NBI-BDO).

Bayron did not honor a subpoena to appear before the NBI-BDO issued by Agent-in-Charge Atty. Rennan Augustus T. Oliva even as it was reportedly acknowledged by his wife when delivered at his known address.

Atty. Roque A. Amante, Jr. appeared at the NBI office to represent the absent  Bayron.

Bayron with address in Tagbilaran City, Bohol was tagged by Sumaylo as the author of a  a series of “defamatory, fabricated, misleading” stories in “The Bol-anon Chronicle”, an online publication accessed through Facebook.

Sumaylo, assisted by her counsel, Lord “Popot” R. Marapao lV  filed her eight-page affidavit-complaint before Provincial Prosecutor Macario I. Delusa for online libel on three counts as defined and penalized under Republic Act (RA) 10175 known as the “Cybercrime Prevention Act of 2012” and Libel under article 355 of the Revised Penal Code.

The three articles appeared online on August 11, 18, and 21, 2019 has caused Sumaylo to suffer sleepless nights, loss of appetite, deep offense of honor, mental anguish, serious anxiety and more importantly, as the Mayor told the Chronicle “the shame and public humility heaped on my family.”

The three malicious articles were apparently written after Sumaylo handily won the presidency of the League of Municipalities of the Philippines (LMP) – Bohol Chapter against San Miguel Mayor Atty. Virgilio L. Mendez, a former Director of the NBI.

On August 11, 2019, Bayron allegedly wrote that Sumaylo bribed Bohol mayors with a trip to Hongkong plus P50,000.00 cash “in return for a favorable vote on her candidacy as president of LMP.”

According to her affidavit, Bayron again ‘published a news item with the defamatory title, “Kwarta O Kahon? Money Prevails,” on August 18, 2019.

On August 21, 2019, “not contented, respondent then again ran another fabricated and misleading story in The Bol-anon Chronicle with the hideous title, “Dauis Mayor dragged into the drug problem leading to the elections.”

The NBI concurred with the complaint of Sumaylo after the result of a preliminary investigation conducted by Agent Glenn D. Damasing recommended for the prosecution of Bayron. (Chito M. Visarra)