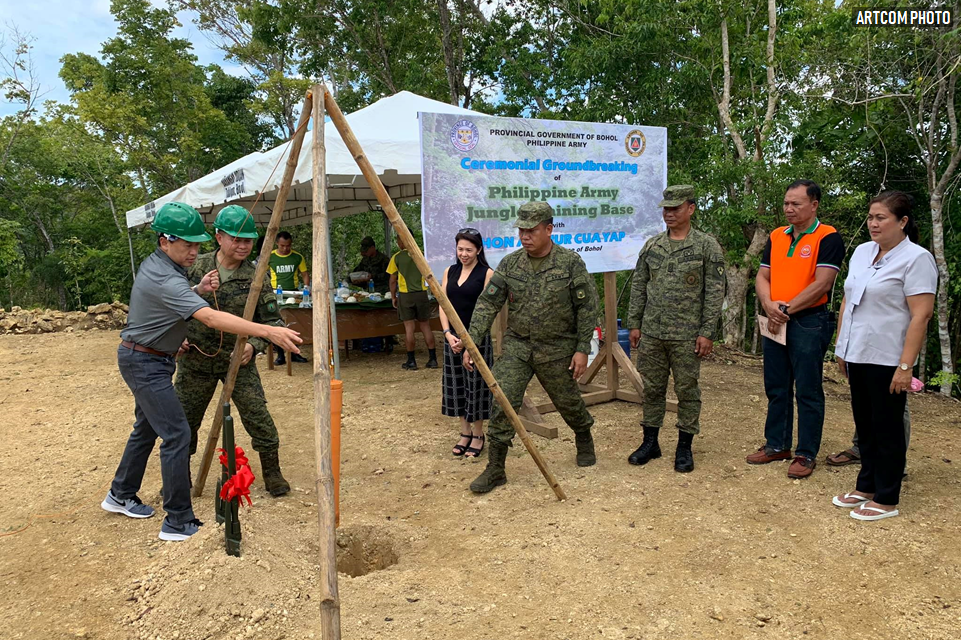 The Philippine Army (PA) on Monday broke ground for a jungle warfare training camp intended for small infantry units in Batuan town amid the provincial government’s continued efforts to turn the province into a training hub for various state security forces.

Governor Arthur Yap with wife Carol and Brigadier General Rowen Tolentino, deputy commander for the PA’s Training and Doctrine Command, led the groundbreaking ceremony near the Makapiko Bridge in Barangay Rizal in Batuan—a few kilometers from the site of the clash between state forces and a four-man armed group believed to have been comprised of New People’s Army (NPA) rebels late last month.

According to Tolentino, the establishment of the PA Jungle Training Base will help boost security in the province considering that soldiers undergoing training at the camp will be fully armed and combat-ready as they conduct exercises.

Tolentino credited Bohol’s strategic location in the middle of the Visayas and the provincial government’s efforts to host military training centers as reason for choosing Batuan as the camp’s site.

The base will not only cater to army units in Bohol, but the rest of the country.

Tolentino said that the base will be specifically for platoons which will use the circuits and other facilities in the camp one at a time.

Each platoon will train at the base for about a month.

“Na-envision namin now is tig-iisang platoon ang pupunta dito na more or less 27 to 30 ka tao,” he said, adding that support personnel will also be permanently stationed at the base.

After taking over as chief executive in July, Yap has been pushing for the establishment of training centers for state security forces in Bohol in a bid to enhance security in the province, especially after the PA’s 302nd Infantry Brigade which was previously based in Camp Rajah Sikatuna in Carmen was pulled out to aid in the government’s efforts to crush communist insurgency in Negros Oriental.

The governor has also facilitated the deployment of at least one company of the Philippine National Police’s elite Special Action Force in Bohol.

Meanwhile, the Philippine Coast Guard is in talks with the provincial government in establishing a regional training center in the northern region of the province. (R. Tutas)