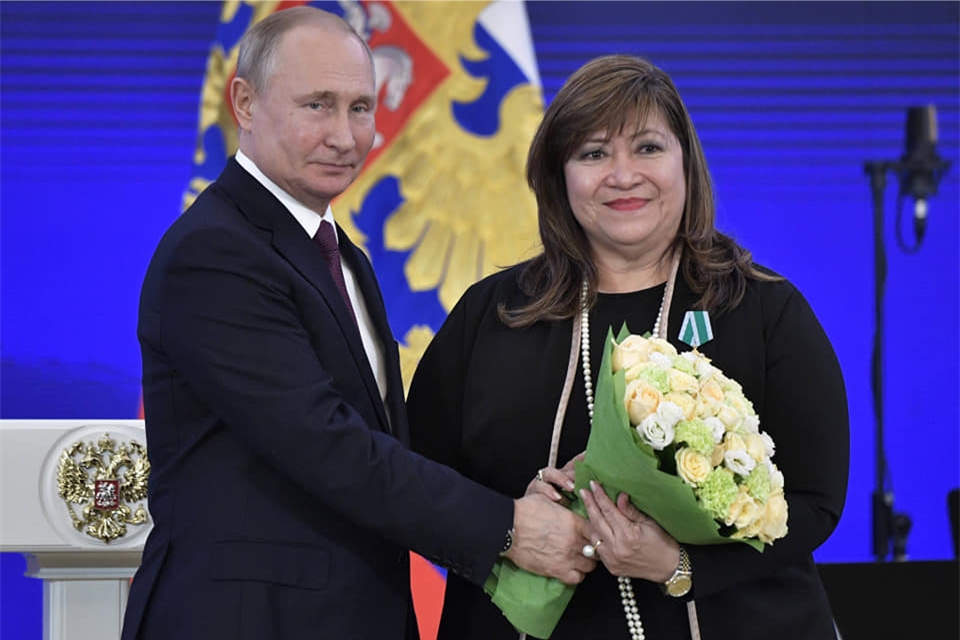 MANILA — Russian Honorary Consul Armi Lopez-Garcia was hailed anew in Manila for recently receiving the Russian Order of Friendship from no less than President Vladimir Putin.

At a reception hosted by Russian Ambassador to Manila Igor Khovaev in Makati City on Wednesday night, the envoy congratulated Lopez-Garcia and praised her works in the past decade as a “highly efficient Russian honorary consul” covering Cebu, Aklan, and Bohol.

“For us, she is our very close friend and sister,” Khovaev told reporters during the reception.

He added that the award is significant because Lopez-Garcia is the first Filipina to receive the high-level state award of Russia in the Kremlin.

“It’s a clear message to all the Filipinos that Russia is a friendly country,” he said.

Lopez-Garcia is the Honorary Consul of Russia based in Cebu as well as the founding chair of the Philippine-Russian Business Assembly.

Garcia was awarded the Order of Friendship for her “outstanding contributions to strengthening friendship and cooperation” between the Russian and Filipino people during Russia’s National Unity Day on November 4. The decoration was conferred by Putin.

As the first Filipina to receive this, Garcia joins other prominent personalities who were bestowed with the same award such as Singapore’s first Prime Minister Lee Kwan Yew, former United Nations Secretary-General Ban Ki-Moon, and Malaysia’s Prime Minister Mahathir Mohamad.

For Lopez-Garcia, her “excitement” since she got the award early November has not worn off yet.

Before her appointment in 2007, she is already involved in bridging friendship between the two nationalities and has in fact initiated a sisterhood agreement between Cebu and Vladivostok in the past.

Back then, the consul said a lot of people would often ask her, “why Russia?” — people who apparently base their perception about the Russian people through movies that portrayed the latter as villains.

“A lot of them were asking and wondering ‘Why Russia?’ And my answer would always be ‘Why not?’ Before my appointment, I had already been helping them in cultural events since 1996,” she said.

She described that Russians are “really warm people and very educated”

“It dawned on me that I had to do something because the Russians are really warm people and very educated. Their values are similar with ours,” she added.