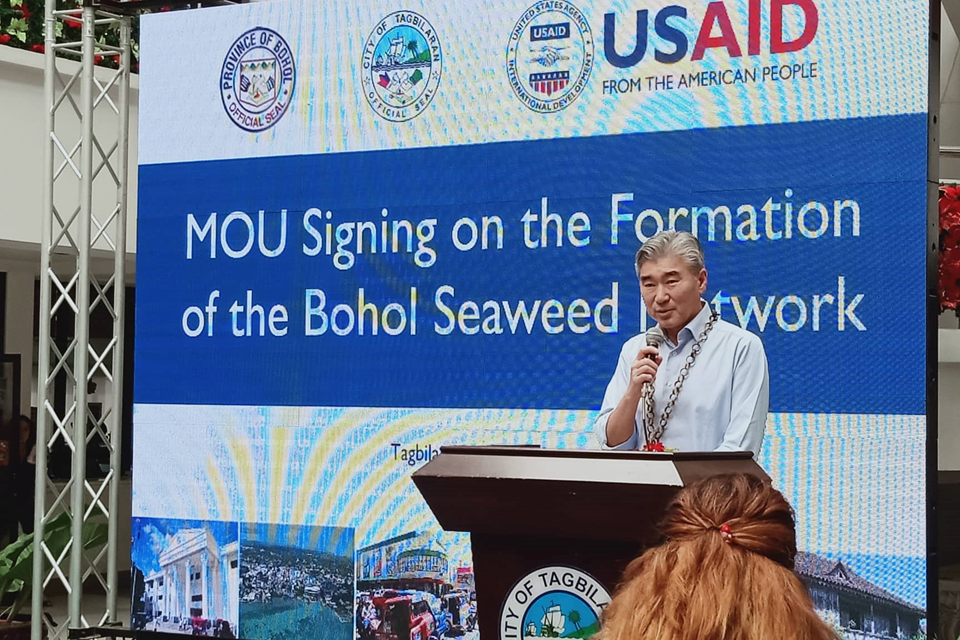 Outgoing US Ambassador Sung Kim in his second visit to Bohol since his appointment as the country’s top diplomat in the Philippines led the signing of a memorandum of understanding (MOU) creating the Bohol Seaweed Network.

The MOU organizes two cooperatives and 17 people’s organizations in Bohol which are comprised of over 1,000 individuals across Tagbilaran City and the various towns into one group to improve seaweed production in the province, said Provincial Agriculturist Larry Pamugas.

It is projected to boost the development of the seaweed industry in the province and help push for programs beneficial to the sector with the assistance of the United States Agency International Development (USAID) and the Strengthening Urban Resilience for Growth with Equity (SURGE) project of Tagbilaran City.

Kim acknowledged Tagbilaran City for its continued support for the USAID through its SURGE program.

The 59-year-old envoy who has been the US ambassador to the Philippines since 2016 has ended his three-year tour of duty in the country and is reportedly set for reassignment to Indonesia next year.

“Thank you all for being part of our success story,” he said in a brief speech.

Governor Arthur Yap, just a month into his first term as Bohol chief executive in August, had noted that he will be pushing for the expansion of the province’s seaweed industry in a bid to increase the income of fisherfolk in the northern region of the province.

Yap cited Nasingin, an island barangay off Getafe town, as among potential growth areas for the industry promising to extend assistance by providing seedlings and nursery and post-harvest facilities such as dryers through the help of the Bureau of Fishery and Aquatic Resources. (AD)