LTO Bohol: social distancing is for all vehicles, not just motorcycles

LTO Bohol: social distancing is for all vehicles, not just motorcycles

The limiting of the number of passengers in observance of social distancing does not only apply to motorcycles as it covers other vehicles as well, Land Transportation Office (LTO) Tagbilaran chief Vicente Gador said amid clamor from some motorcyclists and their families to have the measure rescinded or amended.

According to Gador, the policy which was implemented by the Department of Transportation (DOTr), the LTO’s parent agency, directs the public to observe a one-seat apart sitting arrangement in all types of vehicles including public utility vehicles (PUV).

Gador said that all PUVs should only be accommodating 50 percent of its total carrying capacity while cars should only be occupied by four people—one on the driver’s seat, one on the passenger’s seat and one each directly behind them.

No one should be sitting across each other on jeepneys or multicabs.

The LTO official clarified that the “no-backrider” policy is an offshoot of the social distancing measures ordered by DOTr amid the rapidly growing coronavirus disease (COVID-19) threat in the country, debunking claims that the government only zeroed in on motorcycle riders.

Earlier, motorcycle riders asked for an exemption to allow married couples to travel on one motorcycle but the request was quickly declined by the agency.

Some motorcycle riders have quipped that they share the same bed as their spouses but are not allowed to sit together on a motorcycle. But this was also downplayed by Gador as this was not enough reason for imposing an exemption.

Government officials including Governor Arthur Yap have tried to intervene on the issue appealing for exemptions but the DOTr was firm in maintaining the existing policy.

Starting this week, however, the “no-backrider” policy will no longer have much effect on the riding public after Yap ordered local government units in the province to issue a “one household, one quarantine pass” policy.

The measure allows only one person of a household to go out to buy food and supplies and to attend to urgent matters.

Those exempted from the policy are employees of essential businesses or those not covered by the mandatory shutdown of establishments in the province including health workers.

Gador said that employees particularly health workers affected by their policy should make transportation arrangements through their respective LGUs. (RT) 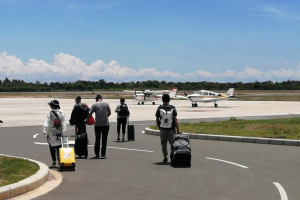