However, the news item, published online and in print by the Philippine Star, was based on a statement issued by Undersecretary Maria Rosario Vergeire’s on Thursday.

“We have observed increase of COVID cases in Central Visayas so we have decided to place the region under enhanced community quarantine,” Vergeire was quoted as saying by the Philippine Star.

The national media outlet’s online version of the news has been deleted as of Friday morning.

According to Yap, he spoke with Vergeire early Friday and found out that Bohol is still under GCQ.

It was clarified that only Cebu City which now has a high infection rate is placed under the more stringent ECQ.

Bohol has only recently allowed the offering of restaurant dine-services and conduct of religious gatherings, although both are limited to fill their establishments by 30 percent and 25 percent, respectively.

Bohol meanwhile has 18 confirmed cases, based on data from the Provincial Health Office.

COVID-19 beds in Bohol hospitals were near full capacity as of Thursday, a Capitol official said amid fears that the…

Governor Art Yap delivered his second State of the Province Address (SOPA) on Bohol Day, Thursday, against the backdrop of… 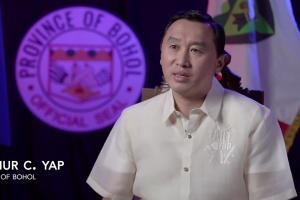 NOTE: THIS STORY WAS FIRST PUBLISHED IN THE BOHOL CHRONICLE’S PRINT EDITION. Gov. Art Yap confirmed in a statement the…