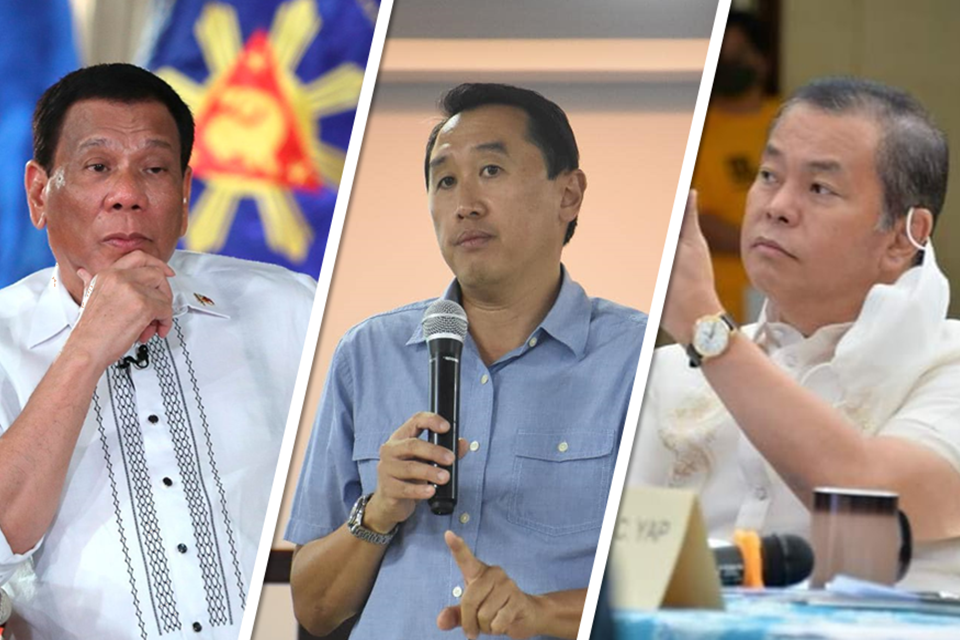 Pres. Rodrigo Duterte asked the provincial government to explain its insistence to spend P24 million for thepurchase of 14 vehicles for the members of the Sangguniang Panlalawigan amidst the pandemic.

Malacañang ordered Regional Director Leocadio T. Trovela of the Department of Interior and Local Government (DILG-7) to look into the alleged “inappropriate behavior/action of Bohol province.”

The order dated April 14, 2021, was in response to a complaint sent to “8888 Citizens’ Complaint Hotline” regarding the move to purchase 14 vehicles for the members of the provincial SP led by Vice Gov. Rene Relampagos as presiding officer.

The regional DILG was asked by Malacañang to take action to the query directed to the Provincial Government of Bohol.

DILG Provincial Director Jerome Gonzales who received the order from the regional DILG wrote Gov. Art Yap regarding the query on the said vehicle purchase amounting to P24 million.

Gov. Yap was asked to comment on the alleged “inappropriate action” after said request to purchase the vehicles was sought by the governor from the DILG offices.

Upon receipt of the order, the governor asked Provincial Administrator Kathyrin Pioquinto to do the necessary steps.

The first endorsement of the governor to the provincial administrator was dated April 27, 2021.

Members of the Sangguniang Panlalawigan (SP) led by its presiding officer Vice Governor Rene Relampagos have agreed to push through with the acquisition of 14 vehicles for their offices amid strong opposition from the public which arose due to the timing of the purchase during the pervading COVID-19 pandemic.

According to Relampagos, all members of the SP voted in favor of the purchase of brand new pickup trucks except for Provincial Board (PB) Members Victor Balite, Frans Garcia and Jade Bautista who were not present during an executive session set by the vice governor.

The SP, which is dominated by allies of Relampagos and Governor Arthur Yap, has 13 members.

Garcia and Bautista who were out on official business had previously expressed support for the planned purchase.

Meanwhile, Balite who was in quarantine reportedly due to his recent contact with his COVID-19-stricken staff member vowed to oppose the impending purchase while the province continues to grapple with the global health crisis that has crippled the local economy.

Relampagos has downplayed criticisms against the purchase saying that those opposing the move are only using the controversy to push their political agenda.

Relampagos, in an earlier interview, also noted that maintaining the current service vehicles of the SP is costing more to maintain than to purchase new ones.

He said that the procurement was previously approved by the SP after service vehicles of “around six” members of the legislative body were noted to be in need of major repairs prompting the legislators to use their personal vehicles for official trips.

The current government-owned vehicles used by the PB members, which Relampagos estimated to be around a decade old, already have “questionable roadworthiness” which may compromise their passengers’ safety.

“There is a difference between wanting and needing something, but in this case, this is a need,” he added.

Opposition on the purchase is not only limited to political rivals of the administration as hundreds of netizens flooded the comment sections of the Chronicle’s news articles on the purchase of the vehicles.

In over 800 comments, almost all of the statements were against the SP’s planned purchase of the vehicles amid the pandemic.

“If those are vehicles for public use like ambulance, or barangay vehicle to transport people to hospitals or at least transport LSIs and HCW, no citizen will condemn such purchase. BUT for officials who are being paid by taxpayers and who can afford to buy their own vehicles and can even afford to give out money during the election, please say that to the marines. Don’t fool us,” said ShielaMaratas.

“Very insensitive move of this administration during this hardest time of pandemic. I urge Board Member Lagunay and Board Member Balite to refuse accepting these vehicles. You are the two whom I still believe you have good hearts,” added Jose Suello.

The Department of Interior and Local Government (DILG) has given the green light to the Provincial Government of Bohol to start the previously deferred procurement of service vehicles for its 13 Provincial Board (PB) members and Vice Governor Rene Relampagos.

According to Relampagos, the DILG approved their planned purchase of 14 pickup trucks worth P24 million which was allocated through the province’s 2021 annual budget.

A copy of the DILG’s Department Authority which was addressed to Governor Art Yap and signed by the Undersecretary for Local Government Marlo Iringan was relayed to the PB on the same day.

The procurement was previously approved by the PB after service vehicles of “around six” members of the legislative body were noted to be in need of major repairs prompting the legislators to use their personal vehicles for official trips.

VG Relampagos stated that he has been using his private vehicle for usage and will continue to do so. Quarters were questioning that if there was no need for the presiding officer of the SP to have a new vehicle, why was the request for 14 vehicles when there are only 13 SP members including the ex-officios?

They also questioned why the so-called unserviceable vehicles which were costing the government a fortune just “for maintenance” are now planned to be used by other staff in the government, maintain the same “expensive maintenance” cost and yet spend another fresh P24 million besides for new cars.