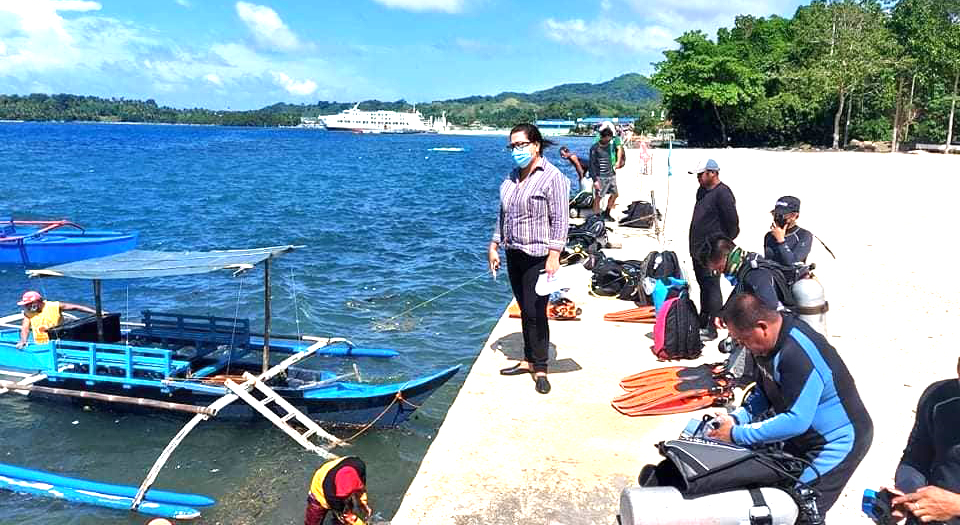 Jagna, Bohol — Officials led by  Mayor Joseph Rañola of this bustling tourist port town is pushing for scuba diving thrusts by launching the final evaluation of its undersea assets, according to its tourism officer Angeli Myra Tiu.

She said that the evaluation is conducted to find out if the water world here is worth for dive and be declared by the Department of Tourism(DOT).

The evaluators was led by Glenece Do, Tourism Operations Officer ll, of the DOT Region 7, along with divemaster Castillo, chief of the Philippine Commission on Sports Scuba Diving (PCSSD) under the DOT. PCSSD is the dive licensing agency.

There had been attempts to conduct such underwater assessment but deferred due to the pandemic that caused the spike to 1,360 active COVID-19cases as of June 24, 2021.

Senator Richard Gordon, who gave his virtual message during the Dive Fest opening ceremony on Wednesday coined the word “Wow Bohol or Watch Our Water World.”

Engr Manny Mendoza of Modala and GMRommel Gonzales graced the event that will run until June 20, 2021.

Aside from Gordon, Senator Bong Go, DOTr Secretary Arthur Tugade, Lapid of TIEZA and an Asia executive each gave their virtual messages.

Montero-Caindec pointed out in a media interview that there’s a need to work hand in hand so that Boholanos can recover from the pandemic.

When asked if other local government units are invited to the festival, Montero-Caindec said that invitations were sent to the towns of Anda, Talibon, Jagna and others where there are potential for scuba diving in their respective turfs.

She said that the dive fest is a strategy in a bid to promote dive sites in this town and other towns, like the one in Cabilao island, Loon town, Balicasag island, and even Balicasag island.

About 80% of the townsfolk of this premier service-economy town largely depend on tourism for their bread and butter, town councilor Aya Montero-Caindec, tourism committee chairperson, said.

But the pandemic devastated their jobs and this became a ghost town, she said in her speech during the opening ofthe second Dive Festival held at the Modala Resort, barangay Doljo here.

For her part, Mayor Nila Paredes Montero, mother of Montero-Caindec, said that “we must be resilient” to recover from the pandemic.

Mayor Montero, who is a diver herself, said that launching of dive festival is a way of preserving the natural environment considering that this town has no alternative nor agriculture for it will take months to lant and eventually harvest.

Both mother and daughter expressed thanks to the provincial government for giving priority to some 15,000 displaced tourism frontline workers to be inoculated as soon as vaccines are available. (with report from rvo)