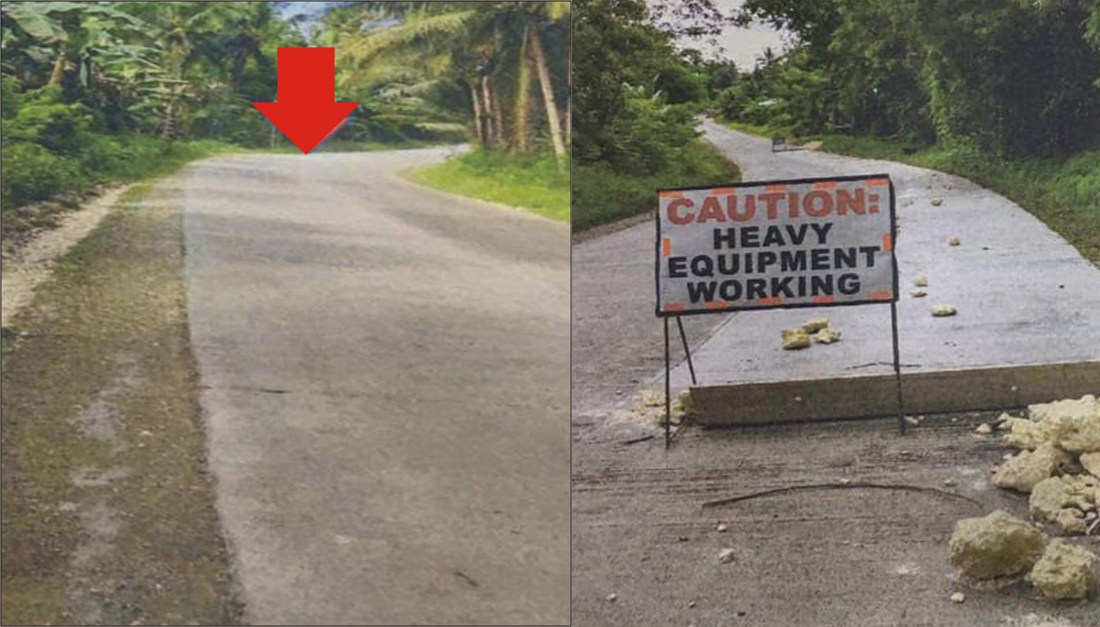 A brazen and shameless PhP15 million road contract for reblocking along portions of the Corella-Ballihan provincial road employing “unscrupulous methods” by a contractor reportedly based in Northern Samar was uncovered by the Provincial Engineer’s Office, Project Management Division 1 (PEO-PMD) during an actual site inspection conducted on July 6, 2021.

In a strongly worded report to Provincial Engineer, Engr. Camilo Gasatan on July 7, 2021, PMD 1 Head, Engr. IV Einstein Gonzales identified the erring contractor as Pablo Labasbas, proprietor/manager of Pablo S. Labasbas Construction of Barangay Dagum, Calbayog City, Samar who “did not execute the works in accordance with the contract.”

Labasbas Construction was the lone bidder for the PhP15 million rehabilitation of the Corella-Balilihan described as a reblocking of 1,661.74 meters of provincial road. No local contractor participated in the bidding.

Ironically, portions of the highway that were subjected to reblocking were not covered by the program of works, according to the findings of the PEO which raised eyebrows on how the contractor will recover expenses incurred even as the company comes from far-off Samar while no local contractor seemed interested in the project which is sourced from the 20% development fund for 2020.

Two days after he received the report from the PMD, Gasatan, on July 9, 2021, forwarded to Governor Arthur Yap and Provincial Administrator Atty. Kathyrin Fe Pioquinto, Provincial Administrator, a 1st Indorsement attached with the ocular inspection report of Gonzales citing the “unscrupulous methods” deemed “fraudulent and unlawful” which are grounds for contract termination based on the Implementing Rules and Regulations (IRR) of Republic Act (RA) No. 9184 or the Government Procurement Reform Act

According to the report obtained by the Chronicle, the contractor deliberately hoodwinked the public “in fact, they were using  the adulterated method of works of which they wanted to show that  their work is similar to that of newly poured concrete . . “

Eman Labasbas, manager of the construction company, expressed a partial lack of knowledge on the circumstances surrounding the assailed reblocking.

Labasbas responded to the call from the Chronicle explaining that he still has to talk to his project engineer even as he bared that initial talks with PEO engineers were initiated to thresh out the irregularities over the project.

The ocular inspection report signed by Gonzales revealed that all the reblocked roads were all in good condition as the contractor applied “cement mortar on the old existing concrete pavement, broom finished. aggregate sub-base materials (item 200) spread on the road shoulder and enclosing a barricade.”

Civil engineers familiar with reblocking projects told the Chronicle that the method used by the contractor will only apply to roads of good condition since the cement which is alleged of dubious quality will only be “thinly spread or painted” over the existing concrete road thus maximizing their profit.

Reblocking, according to the Department of Public Works and Highways (DPWH) is the repair of a damaged section of a road with the contractor equipped with concrete saws and jackhammers removed the demolished remains of the pavement, fix the base with a new one, performs compacting and pours new concrete.

Several witnesses, regular commuters, and motorists of the 9Kms. concrete Corella-Ballihan road told the Chronicle that they also detected what they described as a “shameless display of corruption in broad daylight” as the project engineer of the contractor worked “even in the dead of night” apparently reblocking roads still in good condition.

The Corella-Balilihan road starting from Barangay Poblacion, Corella winding to Barangay Magsija, Balilihan is now the route of choice of vehicles after the completion of the Batuan-Balilihan road and is now pending in Congress for reclassification from provincial to a national road.

1st District Congressman Edgar Chatto oversaw the funding of the more than 9-kilometer provincial road and is now awaiting Congress approval for its reclassification which is now on 2nd reading. {Chito M. Visarra)