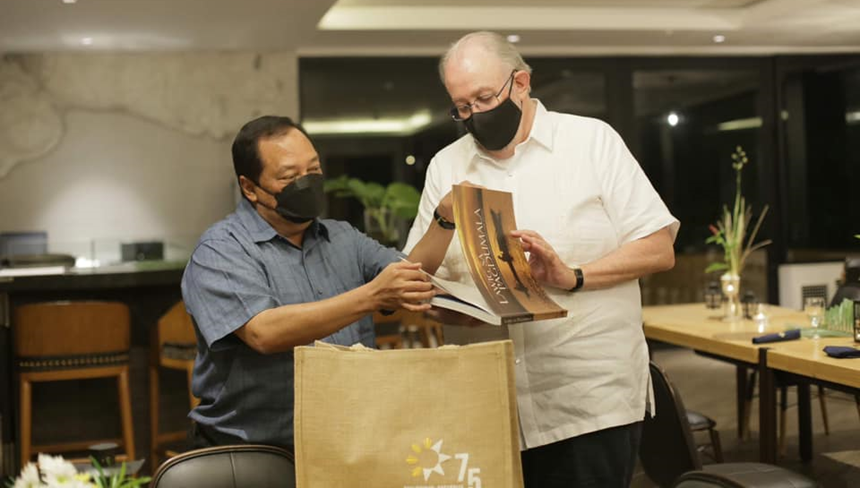 Speaking during the informal media engagement at the Lounge of the MetroCentre Hotel on October 20, the highest-ranking diplomat from the Land Down Under, told the media of the long-standing diplomatic relations between his country and the Philippines, to lend the development assistance program.

Then partnering with the Philippines in infrastructure and other development programs, Australia is now focused on helping the country through improving governance, education and health care systems, the top diplomat who represents Australia here however admitted that the country used to have development assistance into infrastructure.

But with the pandemic, he said his country is into realigning their development assistance to meet the needs in the concept of partnerships for recovery.

Key Australian development partnerships with the Philippines, lie in Health Security, Stability and Economic Recovery pillars, all of which are generously funded by the Australian government.

Australia has funded some P490M vaccine procurement as development assistance to the country, which is among the worst-hit countries in Southeast Asia.

Also asked for logistical support by the country’s vaccine mobilization teams led by vaccine czar Carlito Galvez, Ambassador Robinson said Australia is currently assisting in the logistical issues of distributing the vaccine across over 7,000 islands in the country.

On this, Australia has put up P263M in logistical support to the Philippines and gave another P600M worth of protective personal equipment to the Armed Forces of the Philippines front liners.

In Manila and in several other areas, Australia is also helping the Red Cross in putting up testing centers in Manila and in Mindanao and in the provision of negative pressure ambulance services to protect the front liners.

Robinson said like the Philippines, Australia, which is acclaimed as having done well in dealing with COVID, has also picked many strategies.

Others approached COVID with the intention to eradicate, which is the most challenging, some put up measures to live and work with COVID, and still others put up lockdowns.

“What is key however is vaccination,” the top diplomat stressed, knowing that if people do not get vaccinated, “they do not just run the risk of getting infected, they could also spread the virus.”

Coming in, in his second time to come to Bohol, the ambassador highlighted the good diplomatic relations between the two countries, one that spans 75 years this year.

Hailed as one of the countries with the most successful anti-Covid program, Australia through its emissary revealed an elevation into strategic partnerships with the Philippine–Australian relations in its development aid programs and activities in the next two years.

Under the economic recovery assistance program are the strengthening of the two sovereign countries’ ties in trade and investment.

Even as over 300 Australian companies are already in the Philippines providing employment to 40,000 Filipinos, the ambassador excitedly revealed a survey by the Asian Chamber of Commerce and Industry.

The survey, he said demonstrates that Australian companies are looking at the Philippines more than any other Asian country for their expansion plans.

We are very excited about the development, Robinson said, adding to the fact that Filipinos form the fifth largest ethnic group in his country, highlighting on the obvious close ties between countries. (rahc/PIA-7/Bohol)