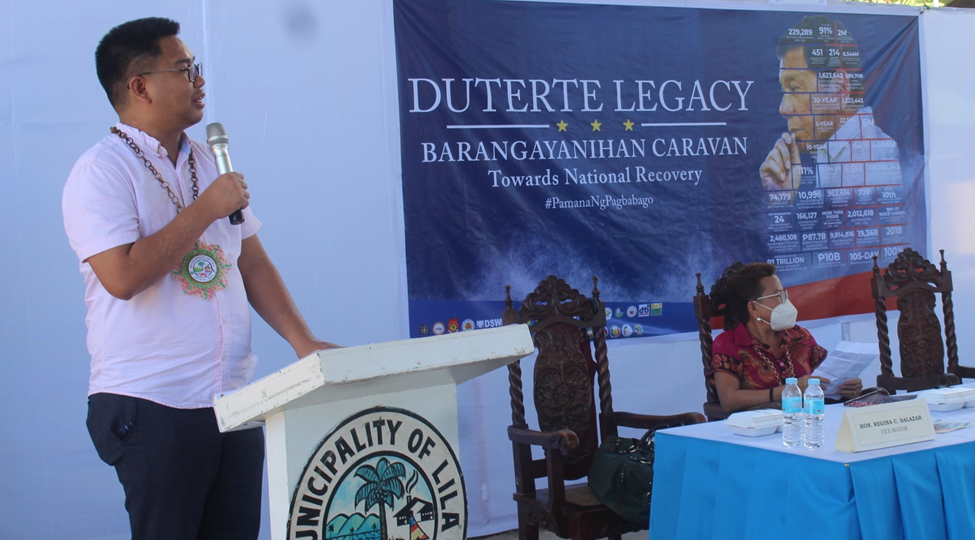 The Presidential Communications Operations Office (PCOO) has launched in Bohol a caravan aimed at trumpeting the Duterte administration’s accomplishments.

Dubbed the “Duterte Legacy” caravan, the program is a nationwide campaign that centers on the theme of “Barangayanihan Caravan Towards National Recovery,”

The caravan which had just toured the neighboring province of Cebu made its way to the towns of Loay and Lila as organized by the PCOO led by Assistant Sec. for global media affairs Jusan Larcena, the Philippine Information Agency and the Department of Interior and Local Government (DILG).

According to Larcena, the caravan was be attended by local government unit and barangay officials and “beneficiaries of the Duterte legacy.”

Among those highlighted in the caravan is UniFAST, an attached agency of the Commission on Higher Education, oversees the implementation of Republic Act 10931, or the free tuition law which was signed in 2017.

The PCOO also underlined the “Build, Build, Build” program, the Duterte dministration’s ambitious infrastructure development plan, and the Malasakit Center, a one-stop-shop for medical and financial assistance from the government.

In a speech, Lila Mayor Jed Piollo said the town has experienced growth under the Duterte administration through various projects.

He also hailed Duterte for his anti-drug efforts.

For his part, Loay Mayor Hilario Ayuban thanked the Duterte administration for the national government projects implemented in the town.

According to the PCCO, the caravan will head to Jagna and Garcia Hernandez on Tuesday.

It will then go to Ubay, Trinidad and San Miguel on Wednesday before wrapping up the program’s Bohol leg in Tubigon, Panglao and Tagbilaran City on Thursday. (rt)