Topic |
The National Grid Corporation of the Philippines is set to establish Emergency Restoration System structures that will allow Bohol to draw power from its original sources in Leyte, paving the way for the normalization of electricity service in the province in February instead of the previously marked target month of April.
January 17, 2022 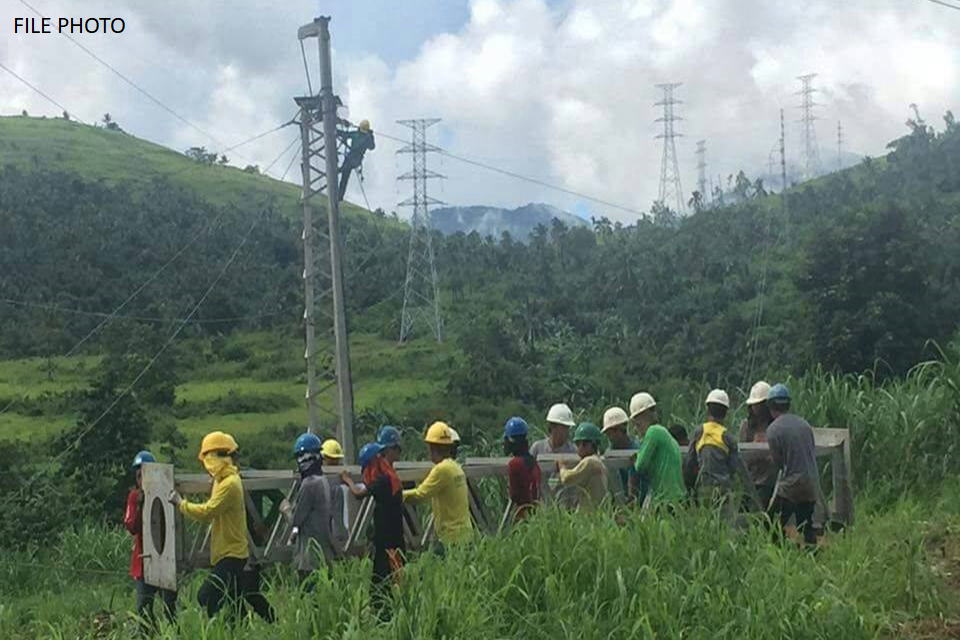 Topic |
The National Grid Corporation of the Philippines is set to establish Emergency Restoration System structures that will allow Bohol to draw power from its original sources in Leyte, paving the way for the normalization of electricity service in the province in February instead of the previously marked target month of April.
ADVERTISEMENT

Normal full power service might resume much, much earlier than scheduled, according to the National Grid Corporation of the Philippines (NGCP)

Instead of April this year, the new timeline targets Feb. 15 for the 90-megawatt power from the Leyte geothermal power plant to get through the transmission lines in the entire province. This, as NGCP will implement an Emergency Restoration System (ERS) using a shorter tower while the 30-story height original towers will be worked out until April this year,

Despite a nightmarish description of the swath of destruction on the power infrastructure as an “engineering challenge”, a month after Bohol plunged into darkness courtesy of Typhoon Odette, the NGCP emergency response team has remarkably pre-positioned materials for the reconstruction of two special transmission towers and the installation of the ERS in the two northeastern towns of Bohol.

The total black-out has affected more than 315,000 customers, 89% residential consumers, 34,000 commercial, public buildings, streetlights, and 138 high-voltage customers under Bohol Light Company Inc. (BLCI) and Bohol Electric Cooperative 1 and II, according to data from the One Bohol Power Distribution Utilities (1BP).

Power in Bohol is under a rotating power-sharing basis provided by Power Barge 104 with 26MW capacity moored in Tapal wharf, Ubay, and the Bohol Diesel Power Plant in Dampas, Tagbilaran City supplying 12MW both owned by Salcon Power Corporation.

Tower 39 in Lapinig Island in CPG and Tower 40 located in Ubay were knocked to the ground by a rampaging “Odette” with wind speeds of 220 kilometers per hour and lashing rains on the fateful night of December 16, 2021.

Towers 39 and 40 receive and transmit power to the rest of Bohol from a 17-kilometer submarine cable from Maasin, Southern Leyte – its lone connection from its major source of power.

In a statement to Power Philippines News on December 24, 2021, NGCP Engineering Project Management Department Head, Randy Galang revealed this alarming assessment a week after “Odette” ravaged Bohol as an aerial inspection was conducted that stunned the inspection team.

However, obstacles confronting the NGCP are the issuance of the vertical height clearance of their temporary cable wires across Basiao Channel separating Ubay and CPG from the Philippine Coast Guard of the Philippines (PCG) and negotiations with the barangay lot owners where the temporary modular towers will be erected.

The “engineering challenge” apparently has been hurdled as loading, transport of materials, and structural plans including the use of choppers in the erection of two modular towers as part of the ERS are just banking on the early approval of the two remaining requirements.

Currently, NGCP is working to reach an agreement with the PCG on a 16.6 meters vertical clearance for a temporary overhead transmission lines to be strung across the Basiao Channel separating Ubay and CPG.

The requested clearance for the cable wires with a span of 1.1 kilometers is critical since the height of the modular towers at 200 feet should be accurately connected to compensate for cable tensioning including guy-wires for added stability, according to NGCP engineers.

According to NGCP sources, the PCG is setting up a physical meeting next week with shipping owners to get their nod on the requested 16.6 meters as a passing vessel barely cleared the official vertical clearance of 23 meters set by the agency earlier.

A temporary suspension of shipping passage thru the channel is on the table for discussion as the NGCP assured the PCG and the shipping owners to fast-track the restoration process so as not to unduly disrupt shipping operations while bringing power supply to Bohol back to normalcy.

Power supply in Southern Leyte has been restored earlier and even supplied part of Cebu province through the Leyte-Cebu grid.

According to data from the 1BP, the Bohol Transmission system is radially connected to the Visayas Grid through a1x90MW 138 KV submarine cable from Ubay to Maasin, Southern Leyte which is connected to a single-circuit 138KV line from the town of Maasin to Ormoc City.

An outage in any of these two lines will isolate Bohol from its major power sources in Leyte and the rest of the Visayas and Luzon Grids even as an alternative transmission interconnection is now under construction connecting Bohol via Sibonga, Cebu via submarine cable to Maribojoc.

The power peak demand for Bohol reached 98MW before the COVID-19 pandemic and was slowly inching back to 76MW before “Odette” crippled the province. (Chito M. Visarra)