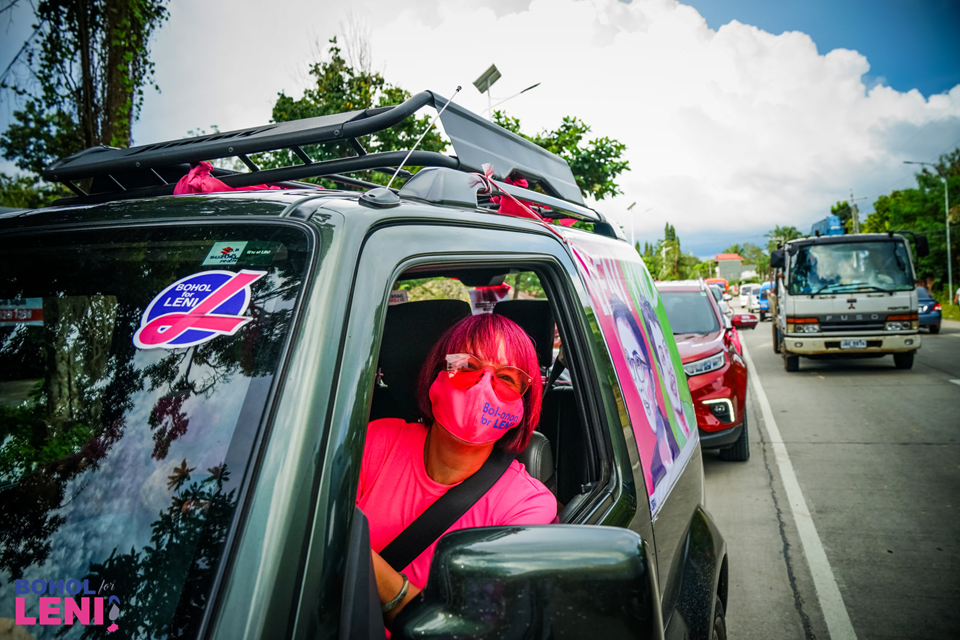 Supporters of Vice President Leni Robredo and her running mate Senator Kiko Pangilinan will hold a “pink caravan” and various other activities on Tuesday to promote their candidacies as the official campaign period for the 2022 national elections officially starts.

Joan Llanos, one of the coordinators of the Bohol for Leni Ground Organizing Committee, said their motorcade will be held in Tagbilaran City and will be joined by various organizations and individuals supporting the tandem.

Supporters of the Leni-Kiko tandem from various towns are expected to troop to the city to join the event.

The caravan starts at Rajah Sikatuna Street in the afternoon and will end at the Old Tagbilaran City Airport where all participants will converge and hold a program.

Prior to the motorcade, the group will hold a noise barrage to kick off their daylong event at their new volunteer center near the Tagbilaran City Hall at 7 a.m.

The hourlong noise barrage will be followed by the inauguration and blessing of the Robredo People’s Council’s new volunteer center and a Holy Mass.

Llanos expressed optimism that Robredo and Pangilinan will soon visit Bohol as part of their campaign trail.

Robredo was last in Bohol in December last year to assist in post-storm relief operations after the province was battered by Typhoon “Odette.”

Those hose seeking national posts are expected to hold their proclamation rallies in their hometowns or known bailiwicks to mark the start of the campaign period.

Bohol has been considered as among the bailiwicks of Robredo as the province helped catapult her to victory in the 2016 vice-presidential race.

Robredo proved to be dominant in the province after garnering 273,589 votes. She won over Alan Peter Cayetano who got 168,247 votes and Bongbong Marcos who only tallied 79,729 votes.