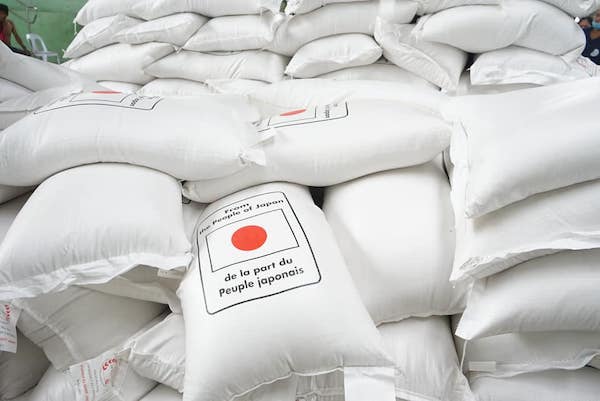 CEBU CITY – Seventeen localities in Cebu and Bohol provinces that were hit by Typhoon Odette last December benefitted from the almost 7,000 bags of rice donated by the Japanese government’s Ministry of Agriculture, Forestry, and Fisheries.

The Department of Social Welfare and Development-Central Visayas (DSWD-7) said in a statement Wednesday nine local government units (LGUs) in Bohol and eight towns in Cebu got 30-kilo per pack of rice donations.

DSWD-7 regional director Rebecca Geamala said the program was implemented through the Tier 3 Program of the Asean Plus Three Emergency Rice Reserve (APTERR) for May.

The DSWD-7 through the Disaster Response Management Division, in partnership with the National Food Authority (NFA-7), delivered 6,666 sacks of Japan-donated rice to the towns of Alicia, Balilihan, Calape, Carmen, Loon, Mabini, Valencia, Tubigon, and the city of Tagbilaran in Bohol and the towns of Alcantara, Alcoy, Alegria, Boljoon, Ginatilan, Malabuyoc, Moalboal, and Ronda in Cebu south.

In a memorandum of agreement between the NFA and DSWD on the distribution of rice, the social welfare agency’s field office in Region 7 was tasked to take charge of the transfer of stocks from the NFA warehouse to the receiving LGUs.

The agency also assisted the LGUs in the releasing and distribution of the donated rice to the pre-identified beneficiaries.