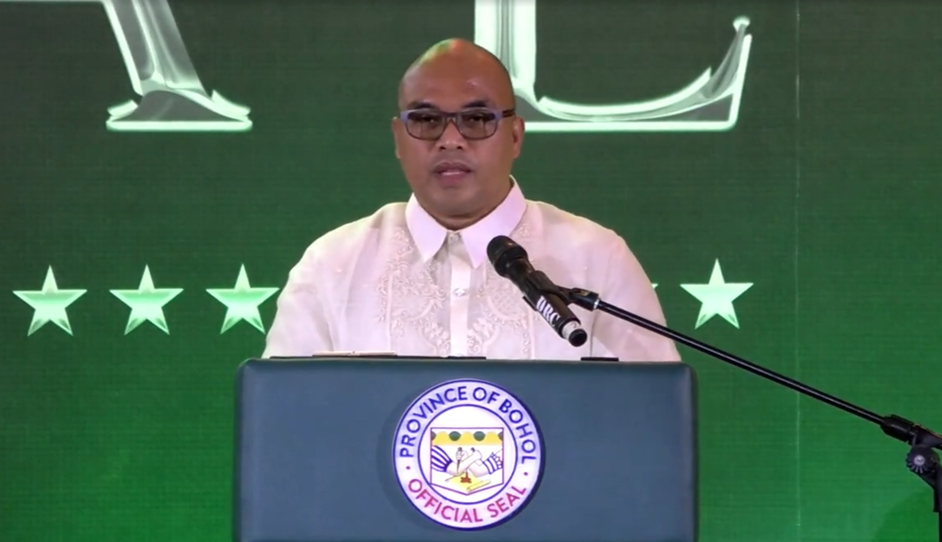 Stable power and water supplies were among top priorities that were highlighted by Governor Aris Aumentado in his inaugural address on Thursday.

Aumentado, in his over 20-minute speech, said power and water stood out as among top concerns of Boholanos based on his interaction with them during the campaign period.

“Two things stand out with the loud collective sighs of Bohlanos—reliable, affordable, and secure water and power,” he said.

According to Aumentado, Bohol needs to establish its own local power source.

He said the province should not rely on external power sources such as those from Leyte and Cebu.

Currently, Bohol is almost exclusively getting its power source from Leyte and soon also from Cebu, which will supply power to the province through a new transmission line of the National Grid Corp. of the Philippines (NGCP) starting next year.

“Relying alone on outside power sources is not a smart option. Since our country is calamity prone, it is wise that we look for sources in our own backyard,” said Aumentado.

He said his government will look into renewable energy including solar, hydro, biomass and wind power as sources for the planned local power plant in Bohol.

“We need alternative sources which at the end of the day may prove to be more resilient, more reliable and more environment friendly,” he added.

Meanwhile, the governor is set to meet with local leaders including mayors and barangay captains to come up with localized measures to address their water supply needs.

“We will map out stratregies to solve this perennial problem. We shall find creative ways which will not necessarily burden our local government units with huge loans,” Aumentado said.

This was an apparent reference to former governor Art Yap’s loan program for water system projects of municipalities.

Yap was allowed by the Sangguniang Panlalawign to open a P2-billion credit line with the Land Bank of the Philippines (LBP) to finance the program which was seen to bury local government units in huge debts.

Immediately after being sworn into office, Aumentado proceeded to the Capitol Building to sign an executive order outlining his development agenda in which the attainment of stable and sufficient supplies of water and power are the chief priorities.

In his first press briefing as chief executive, he said his administration will assist the NGCP in completing its Cebu-Bohol Interconnection Project (CBIP), particularly by helping them secure right-of-way for various properties that will house the firm’s facilities.

However, the EO which was one of four EOs signed by Aumentado does not only cover assistance for NGCP but also other interested investors for their ease of doing business.

According to Aumentado, he has already spoken to the NGCP urging them to expedite the completion of the CBIP which will augment Bohol’s power supply.

After Typhoon “Odette” barreled through Bohol in December, the province was left without electricity for several weeks as the NGCP’s facilities which transmit power from Leyte to Bohol were damaged.

Bohol was forced to utilized two local power sources, the Bohol Diesel Power Plant in Tagbilaran City and the Power Barge 104 in Ubay, which are mostly used for emergencies.

Both facilities can only meet a small fraction of the province’s entire power demand and are more expensive to use as these are powered by diesel and bunker fuels.

The usage of the local power plants caused a surge in electricity rates by a whopping 90 percent.