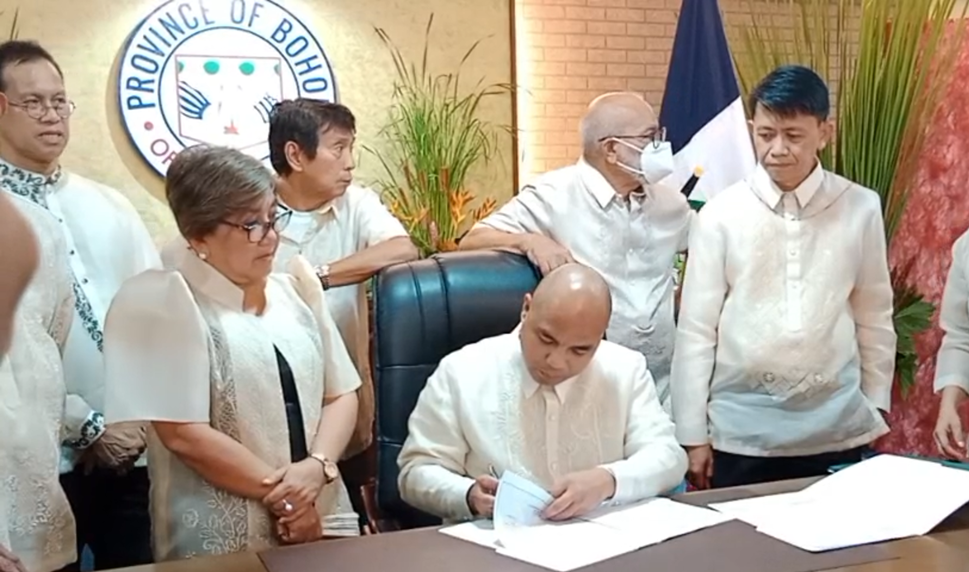 Governor Aris Aumentado, immediately after his inauguration on Thursday, signed his first executive order establishing an economic recovery task force which will be headed by his top appointee.

In his inaugural address, Aumentado said the implementation of measures that will help the province recover from the COVID-19 pandemic and Typhoon “Odette” will be a top priority for his administration.

“Our mission is more arduous and more daunting now with the COVID pandemic still gripping the whole world and our own province just rising up from the havoc of Typhoon Odette. We have so much work to do, so let us roll up our sleeves and buckle down to work,” Aumentado said in his over 20-minute address.

As stipulated in Executive Order No. 1, the Bohol Economic Recovery Task Force (BERTF) will be headed by Provincial Administrator (PA) Aster Caberte as chairperson.

The Capitol’s department heads and representatives from the private sector will also comprise the BERTF.

Under the EO, the BERTF is tasked to hold consultations with stakeholders and create action plans that would help revive Bohol’s economy.

It will also oversee the implementation and completion of the programs.

According to Caberte, the implementation of the economic recovery programs will be a top priority during the first 100 days of the Aumentado administration.

Caberte, who was assistant secretary of the Department of Trade and Industry before being named PA, was also part of the national government’s economic recovery efforts.

“Considering na gikan ko sa DTI, I can do a lot because I was also part of the recovery at the national level in implementing programs. But this time, we will be zooming in on Bohol,” said Caberte.

She added that recovery programs for the province are already in place but highlighted the lack of “accountability” and timeline for their implementation.

In December, Bohol was struck by Typhoon “Odette,” one of the strongest storms to hit the province in recent history.

It left over a hundred people dead and tens of thousands homeless.

Aid from various government agencies including the provincial government, the private sector and non-government organizations have arrived in droves but many Boholanos continue to reel from the devastation left by the typhoon. (AD)