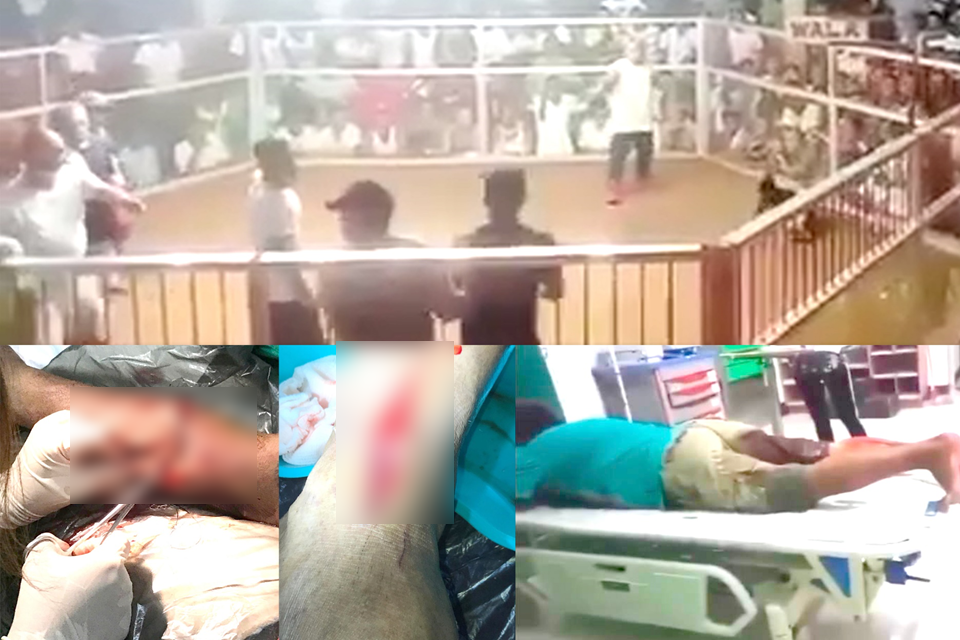 An investigation was ordered by Gov. Aris Aumenado on the highly questionable raid conducted at the Tubigon Cockpit Arena by elements of the Provincial Intelligence Unit of the Bohol Provincial Police Office  (BPPO) last Monday which was declared public holiday.

The investigation was ordered by the governor after receiving reports that there were about 14 policemen who allegedly made bets during the big-time derby but were the same cops who reportedly declared a raid inside the cockpit arena.

A source told the Chronicle that the cops allegedly lost a huge amount prior to the declaration of the raid.

The “surprise” raid resulted in the death of one of the bettors and the injury of more than 50 others who were rushed to various hospitals. The fatality fell into a corroded steel bar when he jumped out from the cockpit arena crowded with more than a thousand bettors.

Gov. Aumentado said he will ask an independent body to look into the incident in order to avoid the same happening in other cockpit arenas.

“The rules of engagement” in the conduct of the raid needs to be investigated”, the governor stressed.

Gov. Aumentado welcomed affidavits to support the allegations of those who were present during the raid.

Asked by the Chronicle to comment on the report, PNP Prov’l Director Batuan denied the allegation that the betting cops were the same cops who declared the raid.  However he received reports that there were, in fact, retired cops who were among the bettors.

Some 14 individuals were arrested during a raid at a cockpit arena in the said town which allegedly led to the injury of the spectators and participants. A near stampede resulted in the surprise raid.

Among those collared was the town’s former vice mayor Virgilio Fortich, who was reportedly the event’s promoter.

Pomerejos said the cockfighting was illegal as it was held on a Monday, violating PD 449 which stipulates that such sporting events may only be carried out on Sundays and “legal holidays.”

Tubigon Mayor William Jao told the Chronicle that the organizers did not need a permit to conduct the event as it was held on January 2, which was declared by President Ferdinand Marcos, Jr. as an additional special (non-working) day.

Jao, who is part of the Tubigon United Cockpit Corporation (Tucic) which owns the cockpit arena, added that the said facility has a license to operate. However, it was not renewed on the day of the raid as the previous days were non-working holidays.

Based on the Administrative Code of 1987, as amended by Republic Act 9492, the list of “Regular Holidays and Nationwide Special Days” may be modified by law, order, or proclamation.

In the case of January 2, 2023, was declared by Marcos as a special (non-working) day through Proclamation No. 90 which was issued in November last year.

The local chief executive lamented the manner in which the raid was conducted.

He appealed to PNP Provincial Director Batuan not to conduct raids in that manner that will cause panic and stampede among the spectators.

Jao said the sudden arrival of the PIU scared off several persons inside the cockpit arena causing some of those who fled to jump off a wall and sustain wounds from barbed wires and broken bottles.

According to Pomerajos, they were “saddened” that several were injured while trying to flee as they had no intention to cause any harm.

“We have no intention na naay ma hurt pero kami amo lang gi follow unsay standard operating procedure. Naa pud miy video ani na operation in compliance sa among directive,” he said. He told the Chronicle that the “element of surprise” is basic in any kind of raid and justified the manner the raid was carried out by his men.

Pomerejos added that it would be up to the prosecutor or the court to decide if the mayor’s contention has merit regarding the definition of a legal holiday.

Former IBP officer Atty. Roland Inting said: “By special declaration, it is a legal holiday only for that single declaration, not every year unless passed by Congress. Said authority by the president is provided in the Revised Administratve Code, and is also an inherent Executive power.”

On the other hand, corporate lawyer Atty. Ramon Torralba opined that the “president’s actions are limited by the Philippine Constitution, laws, public policies and customs. Most of those declared public holidays by presidential action has the presumption of legality.”

Meantime, illegal gaming has been filed against the 14 arrested men for violating PD 449 last January 3. They were subsequently released after posting a bail of P30,000 each.

Complications will, however, arise if the courts decide that January 2 is in fact a special legal pubic holiday -making the raid, arrest and detention illegal. (with reports from Allen Doydora)