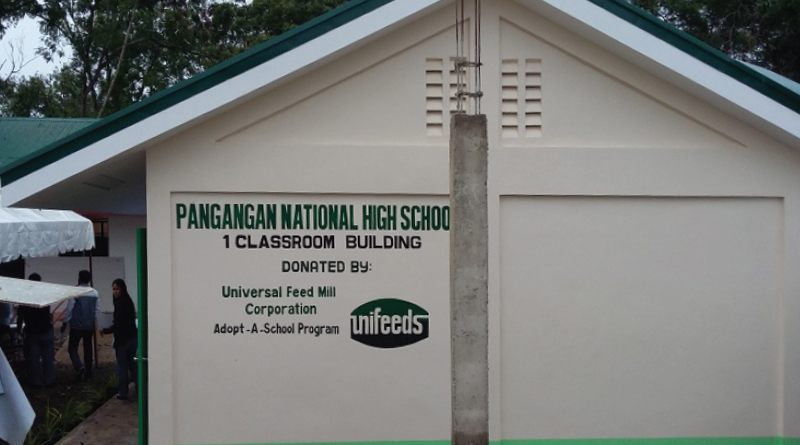 Universal Feed Mill Corporation (UniFeeds) , one of the country’s largest feed mill brought relief to more than six hundred school children in Calape and Loon whose future education was almost denied by the October 13, 2013 magnitude 7.3 earthquake that devastated Bohol and leveled their classrooms to the ground.

UniFeeds, one of those who first responded to the call for assistance from the provincial government during the difficult days following the earthquake has also donated a classroom in Sagbayan and a day care center in Loon.

Despite inclement weather, the barangay community of Talisay, Calape together with officials of the Local Government Unit (LGU) of Calape and the Department of Education (DepEd) welcomed the turn-over of one permanent classroom building from officials of UniFeeds led by Assistant Vice President Rey Evangelista and Bohol UniFeeds Distributor Manolita Sia.

Interviewed live over DYRD Midday News, Evangelista stressed that “this is a continuing program of the corporation of giving back to the Boholanos for their patronage of UniFeeds products”.

The Php700 thousand concrete classroom in Pangangan National High School is equipped with 45 plastic armchairs, blackboard and ceiling fans and is a welcome addition to the present six makeshift classrooms and two unfinished concrete buildings that is home to 346 students.

Perlita Omana, school principal recalled aftermath of the earthquake when all the students had to travel 12kms to the town where they were all jammed into the classrooms of the Calape National High School.

“We are very grateful to UniFeeds for our first permanent concrete classroom that would serve the present and future educational needs of our students”, Omana said.

For her part, Sia who also serves as a municipal councilor of Calape said “I am proud to be connected with a corporation like UniFeeds especially to Dr. Avelino De Manuel, President of UniFeeds and his wife, Elenita Trinidad De Manuel, Vice President for sharing with the community the resources of the company for the educational needs of children in far flung barangays”.

Calape Mayor Nelson Yu expressed his gratitude to UniFeeds officials for the much needed help that gave a boost to the pressing need of classrooms in his town.

A similar turn-over ceremony was held in the afternoon at the Lawis Elementary School in Catagbacan Norte, Loon, Bohol with a permanent two classroom building with armchairs, blackboards and ceiling fans costing Php1.4 million.

Evangelista reiterated UniFeeds sense of responsibility towards the community it does business with by contributing to the educational needs of the students.

Pizarras shared her deep concern about the future of her students after the two story building of their school was destroyed by the earthquake saying “we were at a loss when the earthquake struck with no adequate classrooms for the students”.

Sagbayan, Calape and Loon are considered among the hardest hit towns that bore the brunt of the October 2013 earthquake.

Started in 1984 by veterinarian and nutritionist couple – Dr, Avelino and Elenita De Manuel, Universal Feed Mill Corporation is engaged in the manufacture of hog and poultry feeds with more than 200 branches serving the Visayas/Mindanao areas.

UniFeed products are sold in outlets all over the Bohol with Manolita Sia as exclusive distributor. (CMV).