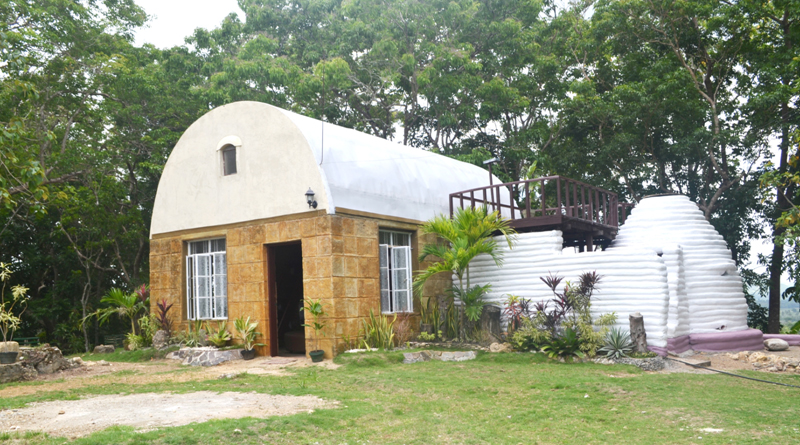 MABINI, Bohol â€“ Itâ€™s not only the local architects or engineers are interested in what is considered as eco-friendly â€œclay houseâ€ or â€œearth houseâ€ being built by the Malicse family in barangay Aguipo of this northeastern town, but also foreigners.

Architects Ar Gan Hock Beng of the G&A Architect and Tan Hiap Hong of same entity showed eagerness to know the hows and technology of the earth house.

â€œItâ€™s cozy,â€ Gan said when he entered the house and then sat on the sofa with architect Terry Malicse, the innovation of the earth house.

Gan and Tan who are both Malaysians, were accompanied by Terry Malicse and daughter Sheelah Malicse to their hometown where the said clay model house is located.

Both Gan and Tan were impressed of the creativity of Architect Terry Malicse.

Employing the heritage house model concept, Malicse said that the model is a housing design concept composed vault house and an emergency shelter. The vault house is liveable, comfortable with floor area of 28 sq.m. (4mX7m) with a 14sq.m. mezzanine and a terrace with 10 sq.m. The eco-house has 5sq.m. kitchen and emergency shelter of 57 sq.m.

â€œIt is affordable house structure using the earth material that is avalable in the area. Heritage house is a reminiscence of the past using the latest construction technology. Old buildings and churches that lasted 300-400 years were built generally using this concept employing the best of technology at that time.â€

The Malicses said the said materials can still be used with the avalability of the technology now.Â Using the Terfast compressed earth blocks is what made this earth house possible.

â€œThis block is composed of earth materials excavated from the ground at the location of this house model which is composed of natural sand and clay, mixed, compacted and compressed with a minimal amount of cement, Fibrian 23, and a propriety additive of Tertex international Phils. Inc.â€

â€œThe result of the mix is hardened earth blocks that is workable within a few hours after molding, resist erosion and can be used as walls of houses and buildings known for a long period of time. Each block weighs 48 kilograms and measured 12x12x12 one cubic feet. Compressive strength developed is 480 to 680 psi with density of 1,680 kg per cu.m. The composition is typical to an adobe stone, a luffaceous stone that is generated from volcanic dust that has been subjected to sedimentation with high temperature and pressure. Adobe is a typical construction stone material that;s commonly used in old churches in norther Philippines.â€

The younger Malicse said that the model house can withstand the strong wind whenever there’s typhoon and earthquake. Shed added that they also utilize local and used materials, such as the old school building posts, in the construction of the model house.