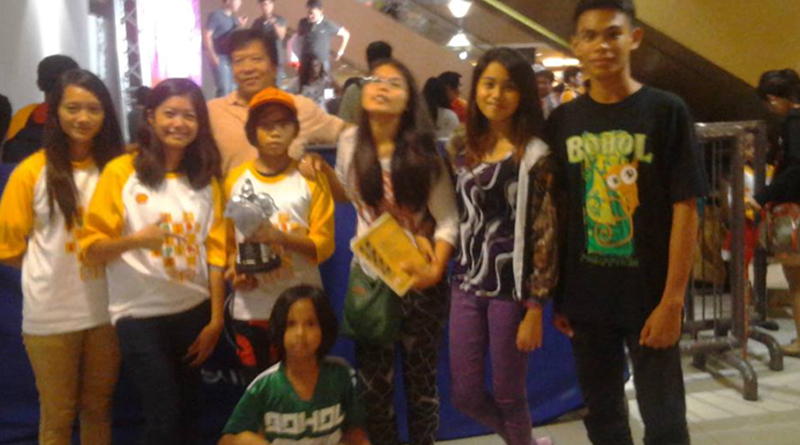 The diminutive mainstay of Doyâ€™s Chess Club made sure that he will bring home the Kiddies title Â by outplaying 6th ranked CPUâ€™s Gil Casa Jrâ€™s Queenâ€™s pawn opening by employing his pet, Slav defense in the final round and came out solo champion with 8.0 points, 7 wins & 2 draws. The road to victory encountered some harrowing experiences when the Bohol Chess Contingent downed with only 12 players from the original list of 30 were stranded at the City pierâ€™s passenger terminal when Coast Guard authorities did not give clearanceÂ  to the shipâ€™s captain to travel after news broke out that typhoon Egay has just entered Visayas region Â last Friday.

The group decided to proceed to Tubigon pier early morning and caught up the 7:00 am trip to Ouano wharf, Mandaue City in time for the opening round upon arrival.

Villajuan will advance to the grand finals set on September 19-20 at SM Megamall, Mandaluyong City; all expenses paid by Shell Petroleum Corporation. He will engage against regional qualifiers. He honed his skills at the Doyâ€™s Chess Club and joined weekend tournament. Â He was this yearâ€™s Panaytayon Kiddies Champion, placed 2nd in the recent Blatz & Bolitz 2000 & below and was the top Kiddie player in the 6th edition, CafÃ© Ligbeans Chess Team Championship.

This yearâ€™s CVIRAA player Hibaya, a 9-year old chess prodigy of Mayor Mario Pahang made her presence felt when she registered 5 wins, 1 draw, and 3 losses. Her last round assignment against Joshua Villaran of Alimayo Elementary School was a won game but her flag dropped first, that cost her a spot in the magic circle of top ten out of 114 participants all over Visayas region.

In the Senior Division, HNUâ€™s Kowloon Sit of Cabad, Balilihan was the best finisher out of 6 Boholanos who were able to join the most awaited chess tournament with 50% performance, an improvement from her previous output in last yearâ€™s edition. Kow-Kow, as she is fondly called by her peers had two winning games but lost by time forfeit. She placed 36th overall while Maribojocâ€™s Dunhill Goudin was at the 38th spot with 4.5 points. Catigbianâ€™s Gladys Joy Balduman and San Miguelâ€™s Jhunrey Alimpolos settled at 41st and 47th out of 71 participants with 4.0 points while newcomer Roxanne Gumapac of Sagbayan placed 54th with 3.5 points.

â€œIn behalf of the group, we would like to express our sincerest gratitude for those who believed in our skills, prayed and supported us for our chess cause by extending financial assistance especially to our beloved Governor, Atty. Edgar M. Chatto, to former Provincial Administrator Atty. Antonio â€œJunâ€ Amora, chess fanatics; retired DepEd employee Rufo Castro, Moy-Moy Longjas &Â  Red Crossâ€™ Jay Quimson for our boat fare and to CENTCOM Commander Lt. General Nick Vivar for providing us a pleasant stay at the Transient Officers Quarters (TOQ) inside Camp Lapu-Lapu and the service vehicle driven by Sgt. Jun Villanueva.â€ said BAYCE President and Head Coach Stella Marie T. Celada. She was assisted by UBâ€™s top lady player Nelissa Lopecillo. (Renzkie Ligan)