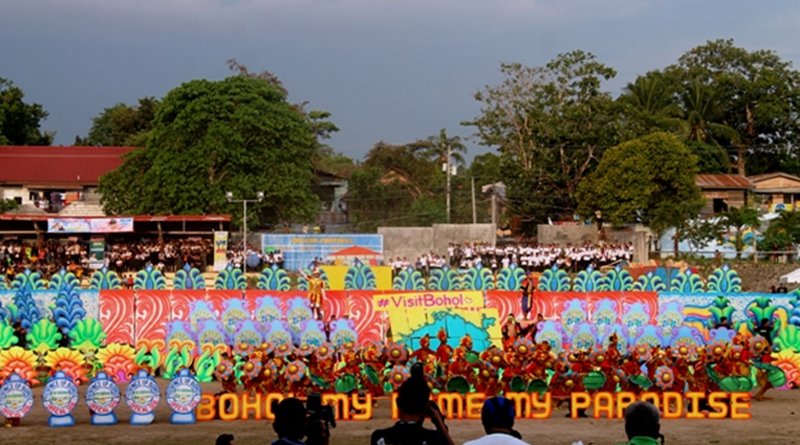 Over the generally successful dance competition at the Carlos P Garcia Complex Sunday, however, comments on the excessive use of props and costume soared as the recent streetdancing contingents apparently pushed to the limits the budget for show visuals which influenced Â the crowd’s choices.

Props and costumes, although claiming only 15% of the judging criteria in the Sandugo dance competition apparently Â covered over half of the actual cost of training dancers, observers note.

“The props seemed to have taken away our attention from the dancing,” commented Reigh Monreal, a cultural worker, in his facebook account.

As to BISU and Tagbilaran City , working from that theme, both dancing contingents developed storylines that involved tourists venturing out to Bohol scenic spots, a theme that also had another dancing contingent Catigbian exploring years ago.

BISU and Tagbilaran City , like Catigbian complemented their performances with a strong showing of costumes and props, in neat choreographed succession, each showing Bohol ‘s wealth of wonders, which earned the judges’ nods.

With a good storyline such as visit Bohol 2015 in time for the homecoming of Boholanos around the globe, putting up a show with tourists and awesome Bohol , good over-all choreography and fine-tuned performance, translated into Â a winning number, sums up a Boholano dance choreographer- who easily picked Tagbilaran and BISU as top contenders before the results.

BISU romped with the championship trophy and P300K cash while Tagbilaran City came up First Runner up with P250K and a trophy.

The contest, which picks on choreography, story content, formation, appropriateness of steps and message clarity a good 30% in its criteria earns a good edge for a group if it works around a core theme, he explains at the sidelines of the contest.

This year too, following years of Sandugo dancing on alien steps borrowed from the mardi gras, organizers demanded a workshop for Bohol choreographers to finally Â show the distinctly Boholano in the dance, explained Marianito Luspo, while reading the criteria.

Apart from that and the theme, working on Bohol environment, assured the enthusiastic yells from spectators.

Other than that, the Sandugo dance showdown judges meticulously looked at performance in general, and the unison, the appropriate Â steps, formations and the fluidity of transitions, along with the display of emotions from the dances in general posts up another 30% in the criteria.

As for musicality, all contingents have shown attempts to blend in the Boholano, Visayan music and rhythms into the presentations, the more prominently observed was Camayaan High School compared to the a mark higher than compliance other groups did. As the musical instruments were not entirely local, some of the beats were, but musicality was just 15%Â  in the criteria.

As to the entertainment rating, criteria says 10% and this year’s contingents deserve no less than 7 so, the contest was really in the first two: choreography and execution. (rac/PIA-7/Bohol)