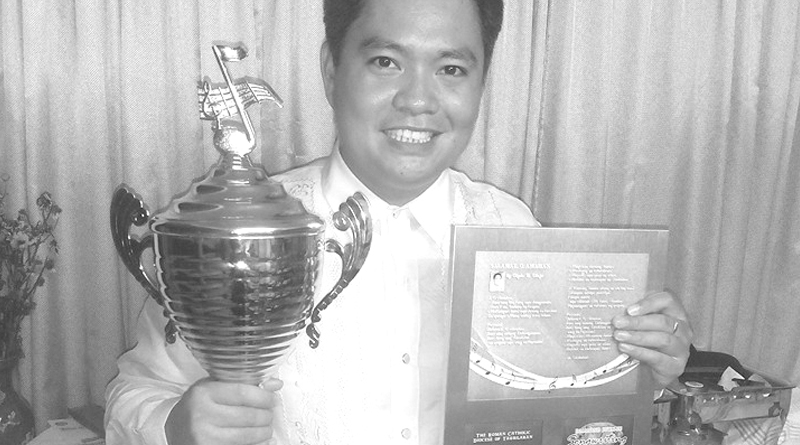 Clyde Bongalos EbojoÂ isnâ€™t touted as a Gospel Song Writer and Composer for nothing. These past years, he has been doing mostly inspirational songs, the latest of them is theÂ Salamat, O Amahan, which won first prize in theÂ recentlyÂ Diamond Jubilee Songwriting Contest of the Diocese of Tagbilaran.

â€œAbot sa langit akong kalipay. Â Among all successes, big and small, that Iâ€™ve had, winning this one gave me the best feeling. I believe God worked within me as I started to write and give melody to the song,â€ said Clyde. â€œNow, God gave me an overflowing happiness which I also share with my family, relatives and friends, and all Dauisanons.â€

Salamat, O AmahanÂ will be the official theme song for the Diocese of Tagbilaranâ€™s Diamond Jubilee in 2016.

Clydeâ€™s greatest objective in writing gospel songs is to get the message out through lyrics that are grounded in the Word of God. It is his strong conviction that gospel songs should bring the lost to the Church and Lord Jesus Christ, comfort to God’s people, and glory to God in the highest.

â€œYes, I do hope that parishioners, Boholanos or even Non-Boholanos, would share with me the same message to God as written in the song,â€ Clyde said. â€œAnd may it linger in their hearts.â€

Clyde, 27, started writing and composing songs when he was nine. His involvement in the Parish Youth Ministry (PYM) in his hometown has helped him to write gospel songs.

â€œGospel music is really close to my heart,â€ he said. â€œA couple of them were used as theme songs of Church Youth Events such as Summer Youth Camps.â€

He was inspired to write and composeÂ Salamat, O AmahanÂ to express his love to the Lord through music.

â€œI was inspired to write and compose this song because when Rev. Fr. Jingboy Saco, Jr. made mentioned about the competition, I felt that this is an event where I can express myself to God through music. At the same time, this is an avenue where I can share my God-given talent that has long been asleep,â€ shared Clyde.

â€œI would say that music isÂ my life. It gives me joy, a sense of hope, and an amazing beauty of life,â€ he said.

As a member of the Lay Liturgical Ministers of the Assumption of our Lady Shrine Parish, he also sings in Dauis male choir.

â€œYes, I sing a lot. I used to sing in various bands before,â€ he said. â€œAnd until now, I sing in tandem with my Papa Mer and my Uncle Michael (Mike), Uncle Vicente (Jun), and their colleagues in Quartet singing like Tito Gerry Saclao, among others.â€

In between his roles as a husband to Marjorie (nee Robles) and a dad to their son Czed Miguel, Clyde plans to create more music.Â  Presently, he works as an operations officer at the Department of Interior and Local Government (DIG) in Dimiao town.

â€œMy priority now is to pour my love to my family. I will give endless love to my wife and raise my son the best way I can,â€ he shared.

For Clyde, his career keeps getting mentioned in the same breath as his spirituality. He said being prayerful has always been an integral part of his life.

â€œEverywhere I go, I talk to God. And I listen to Him,â€ he stressed.

Did Clyde, a registered nurse whose clan, the â€œBongalosâ€, is one of the powerful clans in Dauis and whose mother Betty (a Kabataan sa Barangay official) served as Gov. Edgar Chattoâ€™s longest employee, ever entertain any thought of going into politics?

â€œPolitics? Not for now,â€ he noted.

Is Clyde ready for stardom (soon)? Â â€œWell, it rests in the power of God. For now, what matters is I am able to move the hearts of people listening to my songs.â€

Last weekend, theÂ Hudyaka sa PanglaoÂ was held in the tourist capital of Bohol. It is the oldest, one of the grandest, most distinguished and most colorful festivals in Bohol province.

In the Cebuano dialect, the wordÂ hudyaka, means merry-making. This merry-making is mirrored in theHudyakaÂ dance which characterizes the festival.

The central theme of theÂ HudyakaÂ is Saint Augustine, a doctor of the Church.

Tourists, both local and foreign, flock to the town plaza every 28th of August to witness this one of a kind event. Streets are packed with viewers and vendors all wanting to witness the street-dancing. Â The performers clothe in bright-colored costumes and amazing props, dance to the rhythm of drums and native gongs. Â One of the event highlights was the search for the festival queens.

(Personal note: Thank you to my high school classmate Alex Bongawan, a barangay kagawad of Tawala. Thank you to the Boy Arbilo and family, Mark and Analyn Pollenza-Arbilo for the food and nagka!)