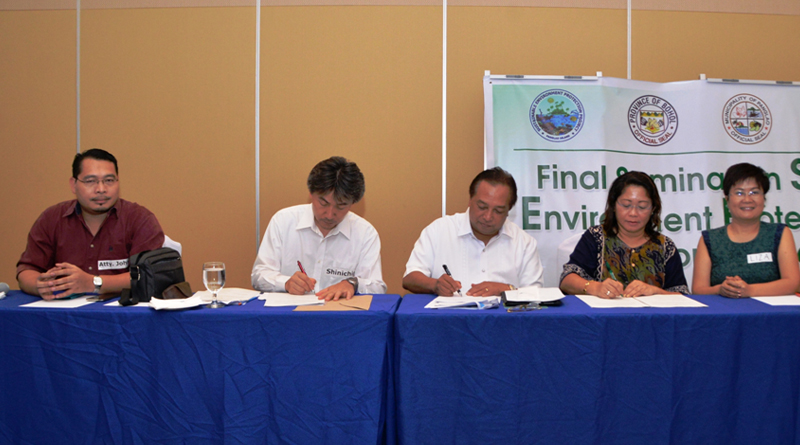 At the project final seminar held on Monday, Chatto acknowledged the accomplishments of the SEPP through the collaboration with the JICA expert team of Provincial Government offices and the LGUs of Dauis and Panglao but also accepted the challenge of the next steps.

The final seminar for SEPP discussed the sustainability aspect which commitment by members of the multi-sector body was sealed through a MOU signing for the SEPP roadmap.

The roadmap properly outlines the next steps in ensuring both tourism and conservation, and sewage management, including a second phase which will involve the construction of a Septage Treatment Facility in Panglao.

The move for a second phase of the SEPP is one that the governor himself vows to lobby with JICA.

Among landmark outputs of the SEPP project include the establishment of a framework for environmental management and sustainable tourism resource use in Panglao through the Panglao Island Executive Committee (PIEC), which Technical Working Groups delved on tourism and conservation as well as Waste Management.

In assessment and monitoring activities throughout the project period from May 2013 to September 2015, the PIEC was able to come up with the use of adaptive management in usage control of tourism resources on carrying capacity. This includes usage control plans such as in establishing a system to determine the number of divers or number of tourists who should be allowed at any given time, monitoring manual and report of regular monitoring, and administrative guidelines for adaptive management.

Another important output of the project is the completion of a feasibility study for the construction of a Septage Treatment Facility (STF) along with effective and realistic management systems to control STFs. This also requires the use of septic tanks with improved capacity.

Furthermore, the SEPP was able to develop and promote over 100 ecotourism tour sites across the province to ensure distribution of expected tourism arrivals across the province once the New Bohol Airport project is completed, thereby preventing exhaustion of existing popular tourism sites.

The SEPP component comprised of the JICA consultants, the Provincial Government and LGUs of Dauis and Panglao led by Mayors Miriam Sumaylo and Nila Montero respectively, along with private sector representatives also identified major environmental protection concerns and key strategies to address such concerns, including amendments and enforcement of ordinances along with the strong collaboration of stakeholders.

He said the emphasis on environmental sustainability is enshrined in the provinceâ€™s vision which specifies upholding sound environmental management in the achievement of its development goals. (Leah/EDCOM)