MANILA TRAFFIC- “THE GATES OF HELL” 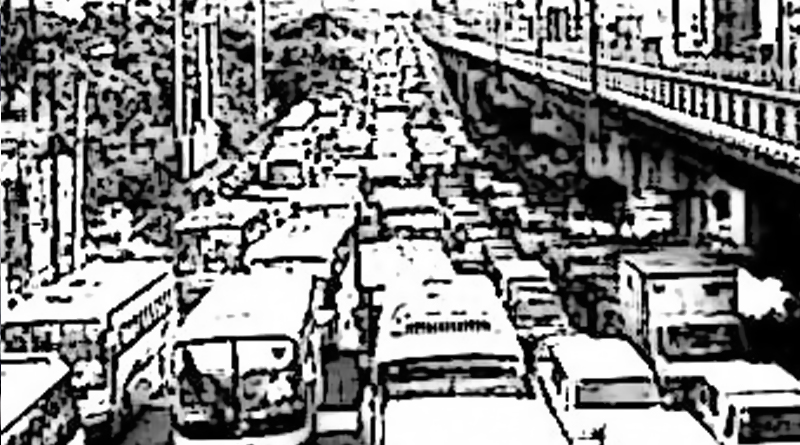 MANILA TRAFFIC- “THE GATES OF HELL”

THE PHRASE –Â “The Gates of Hell” that author Dan Brown used to describe Manila -can be applicable to its horrendous traffic. This particularly applies to a highway called EDSA- only 24 kilometers long and Â passing through 6 cities but can take forever to traverse.

Due to a Â mere thunderstorm, a commuter from Makati reached his home in Quezon City the other Tuesday in 5 gory hours. “I left my office on Tuesday and arrived home on Â a Wednesday.”

The cost of an EDSA Nightmare is not just medical in terms of Â raised blood pressure, heart attacks and road rage. According to JICA, the cost to the economy is a staggering P2.4 Billion/day and if unchecked will go P 6 Billion/day by 2030. It is no laughing matter.

Moreover, at over 1,000 micro grams of black carbon emitted by vehicles in EDSA, this is 1,000 times more polluted than many modern European cities according to the UP Environmental Science and Meteorology department . Imagine going through that hell for 4 hours a day-one can really be a prime candidate for lung cancer.

Add to that, the UP Physics department says, is the “noise pollution” in EDSA which is 85-90 decibles -a prolonged battering of which can damage a person’s Â hearing.

The lack of a modern transit system -characterized by the inefficiency of the MRT and LRT systems is becoming a political cost to the administration. Â For who else would the people blame for this malady when public transport is a government look out?

That is why the Highway Patrol Group had to come in and aid MMDA and the LGUs to Â disengage the brutal gridlock at EDSA that also results in higher gasoline and wear and tear cost of vehicles. In a week’s time , 15 minutes have been reduced from the traffic funeral procession, big deal.

Several U-turns were permanently closed. More troops were deployed at the arteries linked to EDSA because their traffic congestion affects EDSA as well. Â Car pooling was encouraged with a special lane for vehicles with at least four passengers on board. Â The silly odd-even scheme was discarded because the rich and middle class will only buy more cars -enriching the dealers even more.

They will fix 4 of the 8 major water pumping stations in Manila which , que horror, Â did not function in that Wild and Wet Tuesday.Causing massive flooding.

But short of shooting people and wrecking cars, EDSA traffic can only be improved- never solved. Because Manila is structured the way it should not be, urban planner Jun Palafox had always claimed.Â Â

Over the long term Â a modern train transit system is a must like Hongkong and Singapore. Large gated subdivisions near the highway should be opened to public traffic as well as the two humongous Â military camps in Crame and Aguinaldo. Â But they will always cite “invasion of privacy and threatened security”. Mandate car pooling andÂ they will bring you to court for curtailment of the Â right to travel. That is democracy for you -and we complain so easily Â about its consequences.

There is no reason why our main cargo sea port should be in Manila when most of the factories are outside it. Why not the deep Batangas port? After years of muscling them- the oil companies depots Â finally trekked recently Â out of Pandacan, a Â largely residential sitio. What’s wrong with moving the inefficient NAIA Â airport into Clark Â in Pampanga Â and spare the tourists and businessmen the horrible welcome of a bad traffic in Manila?