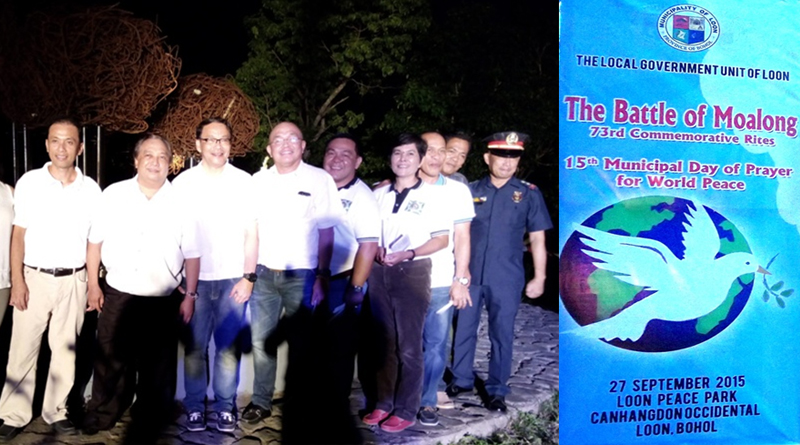 The municipality of Loon once again commemorated on Sunday, September 27, 2015, the 73rdÂ  Â Â Â Anniversary of the Battle of Moalong, simultaneous with the observance of the 15th Annual Municipal Day of Prayer for World Peace.

Also observed during the occasion was World Tourism Day, with its theme of â€œOne Billion Tourists, One Billion Opportunities;â€ and the culmination of the celebration of the last week and month of September as Tourism Week and Tourism Month respectively.

Boholâ€™s most active Gov. Edgar M. Chatto, as in last yearâ€™s commemoration, again made a special appearance as he took time off from his busy schedule to personally take part in the commemorative rites. First District Board Member Cesar Tomas â€œYulâ€ M. Lopez also took part in the celebration which was established during his three-year term as Loon municipal mayor. Others in attendance were Municipal Councilors Nilo P. Branzuela, Ricky U. Masamayor, Lydia A. Almasa and Zaide Y. Cotitico; Loon ABC president Pedro M. Literatus, Jr.; and Loon PNP Chief of Police PSInsp. Dennis B. Lumor.

The event was commemorated for the third time in the spacious Loon Peace Park, the original site (a high cliff that overlooks the Moalong Bridge) where the Boholano guerillas positioned themselves for ambush against the Japanese soldiers in WW II.

The Loon Peace Park was heavily damaged during the great Bohol earthquake that occurred on October 15, 2013. However, it has since then been partially restored to its original form. In contrast was the total destruction of Moalong Bridge, which used to be a focal site during past anniversaries. A temporary steel bridge presently traverses the placid Moalong River pending completion of the on-going construction of a permanent concrete bridge.

Rev. Fr. Ruel P. Pangan of the San Lorenzo de Manila Parish in Catagbacan and Rev. Fr. Darwin Gitgano of the Kasilak Parish in Poblacion, Loon were the Â presider and the homilist respectively during the late afternoon holy mass which was also attended by DepED Loon North and Loon South District elementary and high school principals, school heads and teachers, and principals, instructors and students of the eight public and private high schools of Loon, and the barangay officials and residents of Canhangdon Occidental, Canhangdon Oriental and Basac.

In his message, Mayor Lopez extended his welcome to the guests and the general public for participating in the commemoration rites. He declared that the occasion is worthy of homage and remembrance as it marks an event in Boholâ€™s history when ordinary men and women became heroes in the fight for freedom from oppression and tyranny. The mayor also said that the Loon Peace Park is the townâ€™s symbolic gesture to promote for a lasting peace in the world and in our country.

Board Member Yul Lopez also delivered his inspirational message during the occasion in which he shared his hope and dream for a world free from the shackles of war and greed and dedicated to a lasting and enduring peace.

Meanwhile, in his speech, Gov. Chatto was effusive in his praise to Loonâ€™s municipal leaders for giving homage to the veterans of the Second World War through the establishment of the Loon Peace Park.Â  He expressed optimism that the peace park will serve as a beacon call for all people in the world to espouse the cause of peace for the attainment of progress and development in all aspects of society.

The activity was highlighted by the presentation of the Flute and Ukulele Ensemble of the Loon South Central Elementary School (LSCES). The ensemble is composed of talented pupils of LSCES, with their trainers: Bernadette C. Maramba (flute), Ma. Elvira M. Garcia (ukulele) and Nueva NiÃ±a S. Nahial (choreography).

Sandingan National High School also presented another moving presentation through its singing mentors and selected students acting out their song.

Boholâ€™s war annals chronicle that fateful, rain-swept, gloomy day of September 27, 1942 in Sitio Moalong, at the old bridge that connected the barangays of Basac and Canhangdon Occidental, as the provinceâ€™s first and most successful ambush of the poorly-equipped Boholano guerillas against the superior-armed Japanese forces.

The Bohol guerillas (numbering around 80 men, many of them armed only with bolos)Â Â Â Â Â Â  commanded by the legendary Capt. Francisco Salazar, with Capt. Graciano Espinueva, Lt. Vicente K. Nunag, Jr., Lt. Brigido Serrano, Lt. Woodrow Sales and Sgt. Sotero Arbilon successfully repulsed two busloads of about 70 Japanese soldiers from Tagbilaran City who were on their way to burn the towns of Calape, Tubigon and Clarin.

That 9-hour battle, which began at 7:00 in the morning and lasted at 4:00 in the afternoon left about 60 of the enemy dead and 8 wounded who escaped and straggled back to the poblacion. The Bohol force lost Capt. Espuenova, Lt. Serrano and Pvt. Antonio Iyas. Wounded were Lt. Sales and six enlisted men.

These, and many other events relating to the war in Bohol, are all contained in the book â€œBohol Guerillas in Actionâ€ by the late Judge Pio B. Ferandos, WW II veteran and former Loon Mayor.

The commemoration was capped by the mass singing of the peace song, â€œLet There Be Peace on Earth,â€ lighting of candles and floral offering at the Loon Peace Park monument.