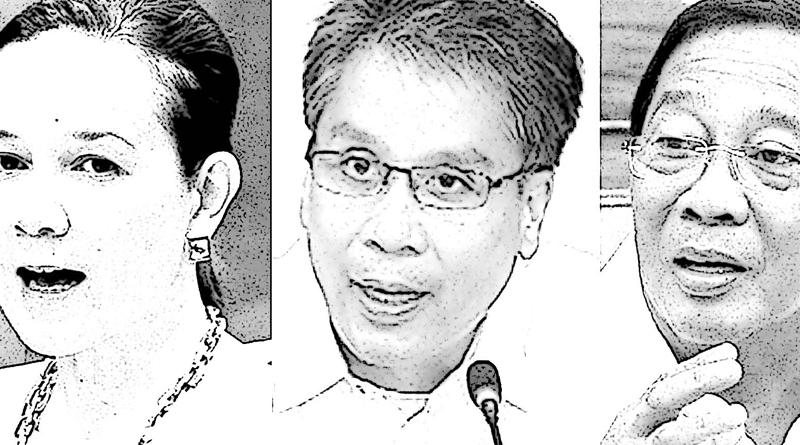 AS OF THIS DATE, Â there are four complete pairs running for the nation’s “First Tandem” in 2016 and two other serious vice presidential bets.

We focus on the word “serious” because there are candidates in the tandems that are downright ludicrous and insane with names like Lucifer ,many who Â allegedly heard the voice of God calling and the perennial vice presidential bet “Amay Bisaya”.

We do not begrudge the committed citizens’ willingness to render public service by running. But seriously, there are candidates with loose screws in their heads and the greedy ones who just want to “raise political capital” for their campaign from friends and suckers. Let’s eliminate them.

So far, the “darlings ” of the surveys are in the same team (senators) Grace Poe and Chiz Escudero – in immaculate white tee-shirts. If their survey numbers by December 2015 remain aloft -and not Â display a pattern of decline- they have more than a Chinaman’s chance of becoming the nation’s new leaders after May 7 ,2016.

Grace is confident Â that her foundation for the citizenship and residency issues are solid-and the detractors Â can go , hung. Of late, Chiz has been having bad mail for not only reportedly Â leading the lady senator by the nose but is also accused on riding on her popularity. The popular political theory, of course, is that president carries Â the votes to the vice president-not the other way around.

If the theory is true, that smells like trouble for Mar Roxas, standard bearer Â of the LP,

who probably hoped Â that the women’s vote and the “tsinelas republic” of the late husband Jesse Robredo of Â (VP candidate) Atty Leni will rub off on him. Â The transmutation of the vote from VP to president may not be too significant.

At sometime, Mar must carve his own political identity, varnish it well and sell it -not the bourgeosie way but the Â masa to the bones Â way. Alongside that, as the “face” of the LP in the election, Â he must be ready to necessarily bear Â the brunt of the anger against the Â non-performing and let’s face it corrupt ways of some of the administration men and women. It’s a helluva task, man. On balance, Mar has Pnoy’s blessings.

Erstwhile front runner VP Jojo Binay is showing signs that Â the wind has been knocked off his Â sail with the avalanche of corruption charges thrown at his family. Â The volume of allegations staggers -and some think Â that even if only half of them were true- they are a serious indictment on the character of a man who wants to inherit the “Matuwid na Daan”Â of the popular president Noynoy Aquino.

His running mate is a reluctant one- Â senator Gringo Honasan- look at his body language and verbal calisthenics, Gringo lacks passion in this chapter of his colorful political career. It seems no Â amount of screeching acronyms like BINGO- (Binay and Honasan) may add to the faltering slide of the hitherto formidable Binay climb. Do you agree or disagree?

If the UNA Â senatorial slate (next week) Â is less than “handsome” politically, this might mirror a lack of “attraction” of the Binay presidential run. Â The VP’s last chance is to go around the Â country relentlessly Â and make sure that the perceived 15-20% Binay loyalists stay their Â course and that the grunting Â (ouch!) demolition job does not gain any more traction that it already had.

The Better-Late-Than-Never comer is senator Miriam Santiago, who resurrected from the grave of sorts- by reportedly (sic) beating lung cancer and saying ” I want to be president” for the third time. The first time she lost by a whisker to FVR Tabako Man (and then challenged him to a fist fight) Â and then placed a dismal 11th in the next.

Aside from the stage 4 cancer that might recur during the campaign or in her say 6 -year term of president- while there are those thrilled by the bombastic quality of her discourse and sharp intellect, there are a Â same number of people Â who are convinced that Â Miriam is a only a “good fiscalizer” but a “dangerous administrator” because of her volatile temperament. Will she declare war on China?

Equally challenged is the ambitious try of the Marcoses in the person of senator Bongbong to rewrite history by ushering back in a flying saucer of sorts the memory of the dictator Ferdinand, the overspending Imelda and the horrors of Martial Law by declaring his VP candidacy.

But Miriam has a niche of her own , for instance, -like having Â the most Facebook followers at 3 million followed by Roxas, Binay and Poe in that order. Â But is following one on Facebook an indication of Â a presidential choice or a mere Â admiration for her Â alluring one-liners and drop-dead pick up lines? And is Miriam Â and Bongbong not like ” oil and water”, so to speak- in some respects especially Â when it comes to human rights?

But strangers things have happened in politics.

On the other hand.declared VP bets senator Antonio Trillanes IV (supports Grace) and Alan Peter Cayetano Â (still obsessed with Davao Mayor Rodrigo Duterte) are probably students of the theory that presidential luster can somehow rub glow to their junior cause.

We are of the opinion, however, Â that Duterte is gone from the race regardless- even if Â all the Davoenos will shave their heads like his daughter- to convince him to run. Â Meanwhile- Mayor Â Erap threatened he will still Â run for president if they” jail VP Binay for plunder and disqualify Grace for technicalities” before the elections in 2016.

But such Â orchestrated moves ( if they will be) may result in a Â backlash as tremendous as the whole weight of the Wall of China collapsing on one’s body -and may yet create a tsunami that can swing anyone else-regardless of qualifications- into the presidency.

The Presidency, remember, Â is always a “matter of destiny.”. No arguments.