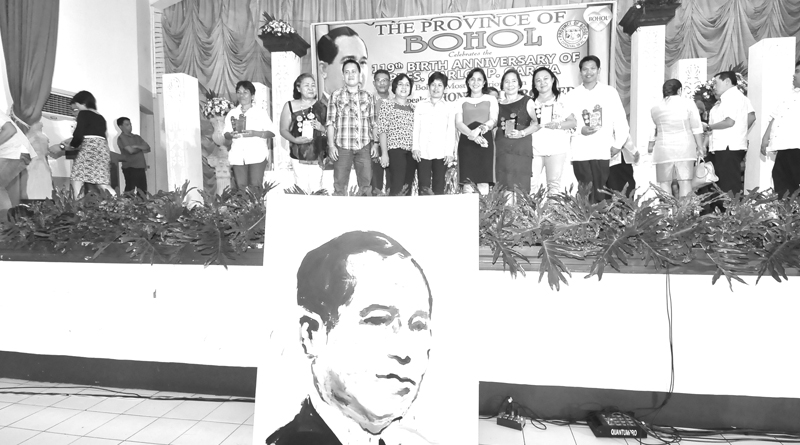 The CPG Awards is an annual recognition given to those who excelled in their respective fields of endeavor, fields which have reflected the ideals and philosophy of the late Boholano President CPG, according to Gov Edgar Chatto.

This is in the hope of providing Boholanos the inspiration to continue the strive for excellence and innovation, Capitol sources said.

For CPGâ€™s love of sports as he himself was an chess player, CPG awards organizers awarded Boholano boxer Jessel Mark Magsayo, Magnifico this yearâ€™s sports citation.

Born in Tagbilaran in 1995, Magsayo has had four wins in the 122 kilograms weight in 2013 and another four wins in 2014. Acknowledged boxer who slipped under the radar, Magsayo tucked more wins under his belt fighting under the featherweight division with 12 fights 12 wins, ten of them under an impressive knockout tally since his May 25, 2013 professional debut.

Now the titleholder for the world Interim Boxing Federation featherweight belt after he defended his belt against Mexican Yardley Suarez in Carson California USA, this October, Magsayo brought pride and honor to Bohol, thus the CPG award.

In the field of music, another CPG awardee is former Bohol first lady Enriquieta Butalid.

A bachelor in Music, Piano major graduate of the College of the Holy Spirit in Manila, Butalid organized Bohol Cultural Society in 1984, Bohol Youth Choir in 1980, a prime mover of the arts awardee and woman achiever in the field of music.

Herself the wife of former governor Rolando Butalid, Enriquieta capped her accomplishments with Excellence in Music award by the City Government in 2015.

A civil engineering graduate from the University of Bohol, Roslinda started her social development work when she was elected Punong Barangay of Buenos Aires, Tubigon.

From there, she involved herself with community development work in the numerous challenging tasks of community work, which led her to the fields of research, community organizing, human resource management, organizational development and the nitty gritty of government partnerships in her capacity as NGO worker.

Meanwhile, non-Boholanos as they are, two more individuals receive the CGP awards in the form of special citations for their consistent service to Bohol and its people by way of their service to their respective government offices.

Also cited was Philippine Ports Authority Port Manager Annie Lee Manese, who has largely been instrumental in the quick rehabilitation of the tourist port of Tagbilaran and who has consistently lobbied for the development of the crucial public infrastructure that would be a conduit of Boholâ€™s over-all development.

For peace and order, CPG Awards issued a special citation to PSSupt Dennis Agustin, Boholâ€™s top cop for his unquestionable dedication to bring Bohol to its glorious perch as among the most peaceful provinces in the country.

In the awarding ceremonies were local officials and Congressman Leni Robredo, who was the keynote speaker during the 119thCPG Birth Anniversary celebrated November 4.Â (rac/PIA-7/Bohol)