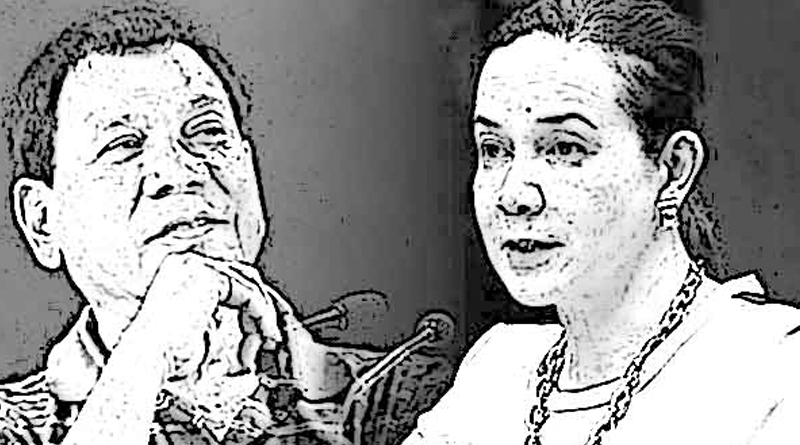 MAYOR “THE PUNISHER” DUTERTE, has thrown his hat Â  -on the table- to go for the Philippine presidency in the May 2016 polls.

It is -as of this writing- Â just merely “on the table”- as the feisty Davao City mayor has yet Â to finalize details with the PDP-Laban Â under senator Koko Pimentel and define the terms to govern the alliance with senator Allan Cayetano who is a hard-core NP under titular head senator Cynthia Villar- Duterte’s presumptive VP mate.

Speaker Feliciano Belomonte (LP, however, ) has reservations whether Duterte, a champion of “Federalism” can still “substitute ” for the PDP-Laban candidate (Dino) Â who had withdrawn his candidacy after getting solid hints from the Comelec Â that Â he will be declared a “nuisance candidate”.

Simple logic would seem to suggest that Â one cannot substitute for a position (as PDP Laban presidential candidate) that no longer exists by withdrawal. The Philippine Daily Inquirer also indicated that the assertive Davao mayor had filed his COC as mayor under a different political party under than PDP-Laban , which may have negative legal implications as well.

Duterte was Â reportedly frustrated with the SET (Senate Electoral Tribunal) decision last week throwing away the disqualification petition against leading presidential candidate, the independent senator Grace Poe in a close 5-4 decision in favor of the foundling-senator.

All three justices in the SET , chairman Antonio Carpio and Associate Justices Teresita de Castro and Antonio Brion plus ( as expected UNA senator) Nancy Binay voted against Poe while the remaining five senators voted for Poe.

There are opinions stating Â that the five senators voted in a political sense. But how can that allegation stand when Grace Poe is an independent senator -candidate Â who does not belong to any of the parties represented by the five senators . Senators Tito Sotto and Loren Legarda are NPC , Pia Cayetano and Cynthia Villa are NP and Bam Aquino is even an LP member.

NPC is still divided as to who to support as president while the NP has three senators running for vice president (all not under Poe) while Aquino ,a relative of the president , is a true- blue LP who has a candidate for president in Mar Roxas. Â So where is the accusation of bias of Â the multi-partied Â senators coming from?

If one follows strictly the Constitution, the Law mandates that the SET is the “SOLE” Â arbiter as to who qualifies to run for office. So ,even if the matter of disqualification on citizenship /natural born issues is elevated to the Supreme Court, legal eagles argue that not even the SC can reverse the SET decision-without violating the Constitution.

ChronicleÂ columnist Atty Jay Dejaresco (LGU Corner) opines that if that happens the distinction between Rules 45 and 65 of the Constitution must be Â clearly delineated.

The Â resultant SET decision cannot be questioned Â at the SC but can Â (at best) be argued that there was “grave abuse of discretion” on the part of the five pro-Grace voting senators. But these guys cited international principles and precedents on foundling cases to vote their stand while Carpio argued that Grace PoeÂ is a Filipino citizen , naturalized but not natural born.

Chiz Escudero, running mate of Poe, a lawyer himself -argued that the three dissenting justices must inhibit themselves Â from that likely Â SC hearing because- by tradition and practice- and as a basic tenet of the due process of Â law- judges cannot review their own cases.

Atty Jay mentions -declaring Poe, being a foundling as automatically Â not naturally born -could set a bad precedent and Â render Â legal cases participated in by foundling lawyers and judges as “ab initio” null and void and Â similar types of doctors can no longer practice as well as they have to still prove their being natural born. Both professions require the practitioners to be natural born.

The “citizenship” issue could be a simpler case as thousands have Â also renounced and then Â subsequently Â re-embraced Filipino citizenship for various practical reasons. When Grace Poe came back in 2004-campaigned for the presidency of her dad FPJ- and subsequently brought back the family to stay here for good Â that year – all of these Â give gravitas to her claims of Filipino citizenship and a residency Â – which Â is more than 10 years before the 2016 polls. A requirement by law for candidates running for president.

The issue on Senator Grace Poe should be resolved as soon as possible for the sake of the Philippine electorate of about 50 million voters – the majority of which had consistently placed their NO 1 preference for Senator Grace Â for almost 9 months now based on credible survey results.

If Duterte is able to finally Â run -amid his ambivalence- he is considered as a fairly strong candidate with an attractive brand identification. Who will suffer the most- in terms of vote transference to Duterte- among Poe, Roxas and Santiago? If qualified and allowed, Duterte has only up to December 10 to make official his bid.

Duterte has always been pointed as the May Poll “wild card” – not necessarily because he will surely win -but his entry could dramatically Â change some of the Â numbers in the presidential race.

Stung by Duterte who addressed Â her as an “American president”, senator Grace Poe, never known to back down from any challenge , just asked the mayor to “bring in on”. A big fight is coming.

For us, honestly, we would like to see both Duterte and Poe Â allowed to run for the highest position of the land. Â Let the “voice of the people” be equal to the majesty of the law.

It is also “the voice of God”.