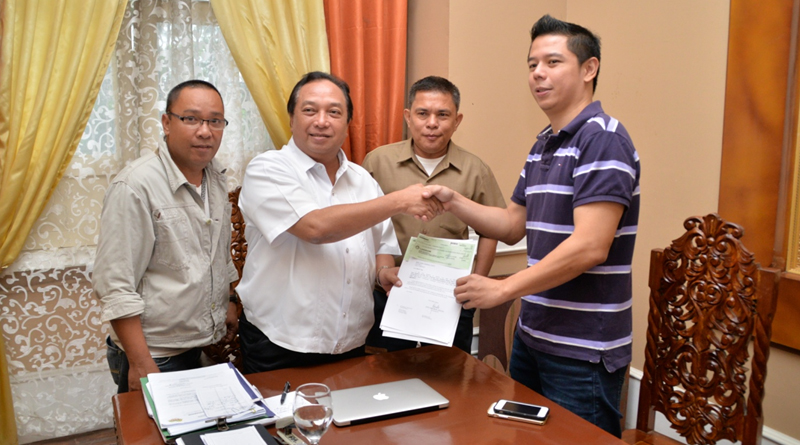 Capitol has released already P112.730 million for the continuing rehabilitation and reconstruction of different government structures and public facilities in Tagbilaran City damaged during the epic earthquake.

The amount is a second tranche in addition to the P47.035 million turned over by the governor to the mayor last year for the on-going rehabilitation of the city hall, bringing the total to P78.392 million for the said project alone.

Sources said city hallâ€™s repair is targeted for completion and re-occupation by the different affected offices, including the mayorâ€™s office, Sangguniang Panlungsod (SP) session hall and offices of the vice mayor and councilors, once the May poll winners will assume.

Chatto cited the city leadership for more than ably executing its mandate and functions and effectively rendering services despite the relocation and disarrangement of the many offices and units until the city hall is again safe for use.

The governor himself and personnel of different attached offices and administrative units have evacuated from the quake-damaged old capitol building, a heritage structure, and been holding offices at the Governorâ€™s Mansion.

An imposing new provincial capitol complex is set for rise starting this year.

The continuing rehabilitation works in the city out of the already P112.730 million released have included the city hall, engineering office and its storage, social welfare building, veterinarianâ€™s building in barangay Tiptip and senior citizenâ€™s building in Poblacion II.

The rest have involved the barangay halls of the cityâ€™s 15 barangays; health centers of barangays Manga, San Isidro and Ubujan; central public market and integrated bus terminal in Dampas; and public markets in Cogon and Manga.

All these have been funded as part of and under the P2.3 Bohol Earthquake Assistance (BEA) â€“ Phase I. The whole assistance package for the city is P115.124 million.

The BEA fund has been intended for the rehabilitation, repair or reconstruction of the different local government buildings, infrastructure and public facilities in the province, city and towns affected by the devastating earthquake.

The P2.3 billion aid from the Aquino administration was personally handed and turned over by then DILG Sec. Mar Roxas to Chatto on behalf of the provincial government, which has in turn released to the LGUs their respective allocations.

Chatto again thanked Pres. Benigno S. Aquino III during his seventh visit here on March 2 for greatly helping Bohol rise from grave ruins and constantly supporting the development efforts, notably the on-going construction of the Panglao airport which will be finished by December 2017.

The BEA implementation has posted a significant accomplishment despite the strict national guidelines, lack of engineers and other technical people and tasking preparation of the programs of works for over 1,000 rehabilitation projects and subprojects province-wide.

Almost 60% had been accomplished out of the 1,063 sub-projects, which approved programs of works already numbered to 1,050 with corresponding 1,026 checks issued, all amounting to P1.856 billion.

This was as of February 25 when the governor delivered his annual State of the Province Address (SOPA).

Allocations were released to the LGUs also depending on the programs of works being done.

Before the city got its second huge assistance last week, the recent releases included additional allocations for the continuing rehabilitation works in Maribojoc turned over by Chatto to Mayor Leoncio Evasco at the town hall.

There were previous BEA releases to the said LGU, not to mention the varied emergency aids and recovery helps delivered by both the national and provincial governments to the town and its affected populace.

All these, meanwhile, must have prompted the Maribojoc residents to assail an ABS-CBN report Friday night featuring an interview with their mayor that the town got aid from Davao and never from either the national or provincial government.

The mayor is a known close Duterte associate.

The report, by Atom Araullo, also aired an interview with another source whom he introduced in his report as a â€˜â€˜political analyst.â€

Other Boholanos who saw the televised newscast said that the source â€œpromotedâ€ by Araullo to a political analyst in his report has never been known or considered to be such.

Except, they said, that the ABS-CBN reporterâ€™s â€œcredible sourceâ€ is actually a former city councilor and candidate known to be in the Bohol opposition that includes the Maribojoc mayor—while also seen in a meeting of the opposition faction for Binay. (Ven rebo Arigo)