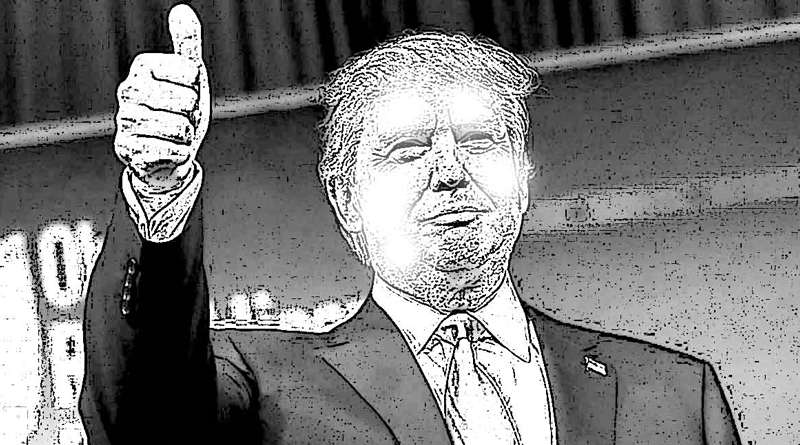 DISCARDED MONTHS AGO Â  as not a serious candidate, Donald Trump (69) is now the leading Republican candidate for the US presidency in the November polls.

Trump is a novelty candidate whose mouth speaks faster than his brain thinks.

But Trump is a media genius, Someone voted as Times Man of the Year in 1969, invented “The Apprentice” one of the most successful TV shows and wrote “The Art of the Deal”, No 1 best selling business book of all time must really know how to read his audience. Coupled with a Wharton degree in finance, he has built an enormous wealth as well-screening out donors who will control his mouth. Now he is a loudmouth as he wants to be and rival Democrat Hillary Clinton sees this as his -strength and weakness -as well.

But Trump knows media so well. Â He knows that programs get a high ratting Â whenever he is interviewed or quoted.

In fact, experts estimate his outrageous pronouncements earned him US$2-B worth of “free” media coverage Â to the only US$700-M to the more sedate ,formal Clinton.

Ironically, he selectively bashes media as well Â and sarcastically nicknames his GOP opponents (liar, low energy,lazy etc) into submission. He has beaten them all squarely and his crowds are bigger and more involved.

Trump’s remaining rival Ted Cruz, in desperation, got personal by placing an advertisement of Trump’s third wife Melania , a former model in a nude photo for GQ magazine in the year 2000 and asked the American voters if Â this is the kind of Â First Lady that Â America wants to have.

Clinton fired early by suggesting “America needs a steady hand in using America’s lethal guns” even as Trump suggested he will not hesitate to use nuclear weapons versus the ISIS. This indicates his lack of appreciation of nuclear fall outs Â and that nuclear wars usually have no winners.

How outrageous can Donald’s positions be?

Trump will build a massive wall to keep of Mexicans away from the USA because they are “criminals and rapists” and will ban all Muslims or immigrants coming to the USA. He wants to tax the wealthy (a popular stand) and deport all the illegal minorities in the USA.

He has often blurted bigoted statements versus women that clearly exposes how lowly he views women in society in general. Â (He just sold the Miss Universe franchise he owned for years).

Trump is a fan of Russia’s Vladimir Putin (an old Obama nemesis) and vice versa. US foreign policy towards Russia would become more “tolerant’ of Putin’s obvious excesses in a Trump rule.

Donald says Washington has shortchanged the military with Â lack of spending for defense and keeping world order. But the Â fact is the USA spends a military budget yearly that exceeds that of Russia and China combine. In dangerously keeping with his macho image Trump hints at returning to waterboarding and other form of torture against Â suspected terrorists -eliciting an image of a Trump era of grave human rights abuses.

While he gets rave reviews from the 17% Â unemployed Americans, Trump Â is not telling he whole truth , according to economists, when he claims America is poor. Â The per capita disposable income of Americans (as of 2014) is still the highest in the world and the GNP per capita share is seven times that of the Chinese.

But Donald knows how to really play to the crowd. He Â promises more “jobs” to the hoi polloiÂ and slamming globalization (outsourcing of labor from cheap sources abroad) that has deprived many Americans of jobs at home.

Of course, the wily Trump does not highlight the fact that this practice could lead to more competitive prices of Â American goods and services and Â thus prosper the nation.

But by far the biggest contrast in a Clinton and Trump presidency would be in the area of foreign relations. Hillary has been secretary of State and senator for far too long- against the rumbling, directionless foreign relations voodoo Trump promulgates at the drop of the bangs of his hairdo.

Verily, many Republicans are eyeing to jump camp to the Democrats in case Trump wins the GOP nomination just to stop this runaway train from hurtling the nation into perdition.

But Trump always has an answer and says there are equally as many Reagan Democrats out there in Hillary’s camp who could change allegiance.

It will be a most interesting presidential fight in November.

It could produce the first Woman President of the USA or the first outrageous, outspoken iconoclastic maverick president in the annals of American history.

Fun people are already thinking of Trump declaring Hillary as “that Lady is a Tramp” (apologies to Frank The Blue Eyes) . We can, therefore, also likewise imagine Hillary saying Donald is too talkative , boisterous and quacks like a duck.

So if Donald quacks like a duck – he must be a duck. Donald Duck for Â President of the USA?