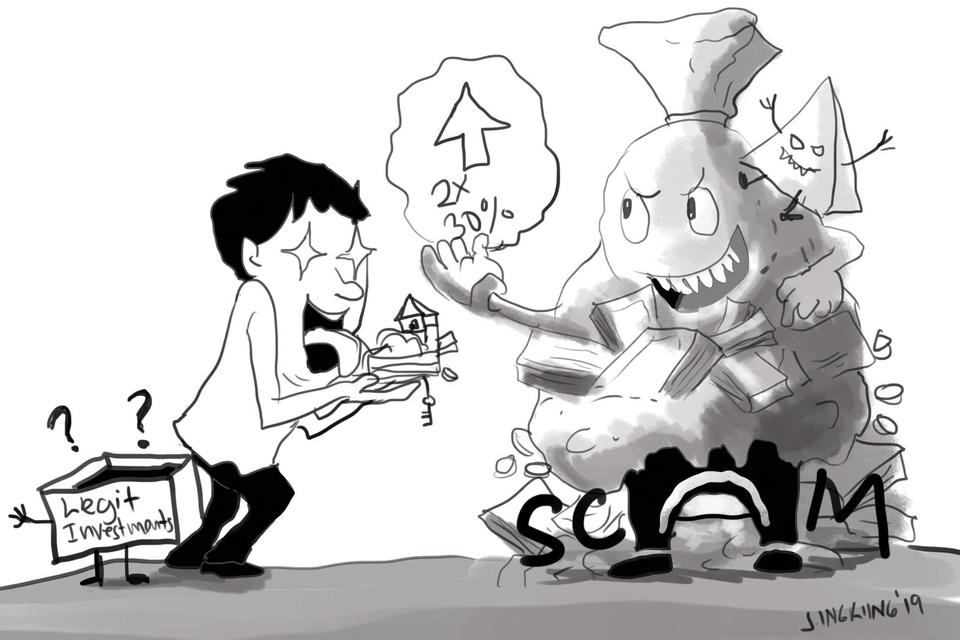 Deceit and greed are as old as Adam, Eve and the Serpent. The Serpent wanted to lull man away from God’s graces through the enticement of Infinite Wisdom and Power by eating the forbidden apple.

Adam and Eve, in their human weakness of greed, wanted to be gods themselves and ate of it. Perdition followed both; only the Serpent rejoiced.

There was misplaced trust on the Serpent who, certainly, was a smart, charismatic salesman with an oily tongue. History repeats itself every day.

All the elements above can be likened to modern-day scams -usually parting of money and property from duped investors using man’s weakness for easy money, even the lonely search for romance and religion itself.

Easily the biggest Ponzi Style investment scam to date was initiated by a pastor in Bislig, Surigao recently-enthusing “the faithful” to part with some P10,000 up to P 2-Million  “donation” per individual to “help propagate the faith, livelihood and benefits” to the Kapa Community Ministry International. “Blessings”, the wily pawns of the church told the huge 5,000 victims who parted with P50-Billion of their savings.

Not even the top 5 Philippine corporations will make such profit; only drug dealers and smugglers do. As they say, if it is “too good to be true” – it is probably so.

But, Watson, suckers are born every minute -and there are just so much poverty and lack of opportunities in the countryside that make these people vulnerable to scams. President Digong Duterte has ordered Kapa closed.

Religion is just one instrument used- a useful one as Filipinos are quite predominantly Catholic and take God seriously in their lives. But “romance” is another where Rappler reports there are many victims of the “Lonely Hearts Club” scam.

A website called ScamHaters disclosed that for some reason many victims are Filipina women (usually above 50 years old) who are cyberstalked into a long distance relationship with a promise of a good future. Then they are convinced to part with their transferred money for an accident, a plane ticket or whatever reason so that Prince Romeo can come to the Philippines.

Of course, Prince Romeo never appears; he is just another frog.

There are those women victims forced to send online photos of their exposed bodies to their prospective partners only to be threatened with online exposure if they do not cough up the cash. The FBI says “Romance Scams” exceed $230-M worldwide.

It’s not just Filipinos but various nationalities who are victimized.  Recently, the PNP arrested 490 individuals operating call centers in Clark City-purporting to be operating out of London and gypped investors of millions of dollars using a fictitious stock market trading system whose stocks kept rising suspiciously, Rappler reports.

Al Jazeera also announces “Manila has become the nexus for sophisticated scammers fueled by call center workers who help fund organized crimes”. A group of American fraudsters in Manila were recently arrested. They claimed to the victims that they were operating out of New York and London.

When someone phones a person announcing he has just won something he never participated in and then asks for one’s personal data- one must be careful or one can suffer “identity theft” and one’s email, ATM and bank deposits can be compromised.

Let us recall some of the Big Five Scams in the nation so one can be guarded when one encounters such shady business propositions.

The Matteo Management conned 20 individuals to part with their billions with a ” guaranteed safe return” and then the officers suddenly disappeared after getting their hard-earned money. Losses: P4.3 Billion.

In 2007, a Singapore-based Performance Investment Corporation milked P11 -Billion from rich people here in a dubious Foreign Exchange Trading conspiracy. Meanwhile, some P12-Billion were siphoned out of 100,000 families in Pagadian City by the Aman Futures Corporation by engaging in the complex, risky commodities trading business promising 80% profit in 20 days.

Earlier, in 2002, some 1 million individuals lost P25 Billion to Multinational Telecoms Investments Corporation who promised them a 4-5% return on their capital investment per month. The proponent is in jail.

The Big One was Legacy Corporation run by a bright ex-banker who promised in 2008 individuals P 15,000 commission for their money to be lent out to fictitious motorcycle finance and loan borrowers using his bank network of rural banks. The officers were the “real borrowers”. The Ex-Banker was jailed and died of cancer in 2012.

So to all of us common folks – ignorant of the esoteric language of banking, finance, and investment- better think one hundred times when a juicy deal comes to one’s table. Consult one’s banker and lawyer about the risks.

Better still- once established as a potential scam, write to the Securities and Exchange Commission about the identity, location, and methodology of the fraud so that the authorities can padlock their offices and send the scammers to jail. Before they can victimize one’s relatives, friends, and loved ones.

Anyone can be a victim- the poor who does not know any better, the OFW who has money on his hands and looking for an investment and the rich who have too much money on hand and had lowered their standards in evaluating proposals teeming with God-awful risks.

Watch out, friends, you and your loved ones can be the next victims.