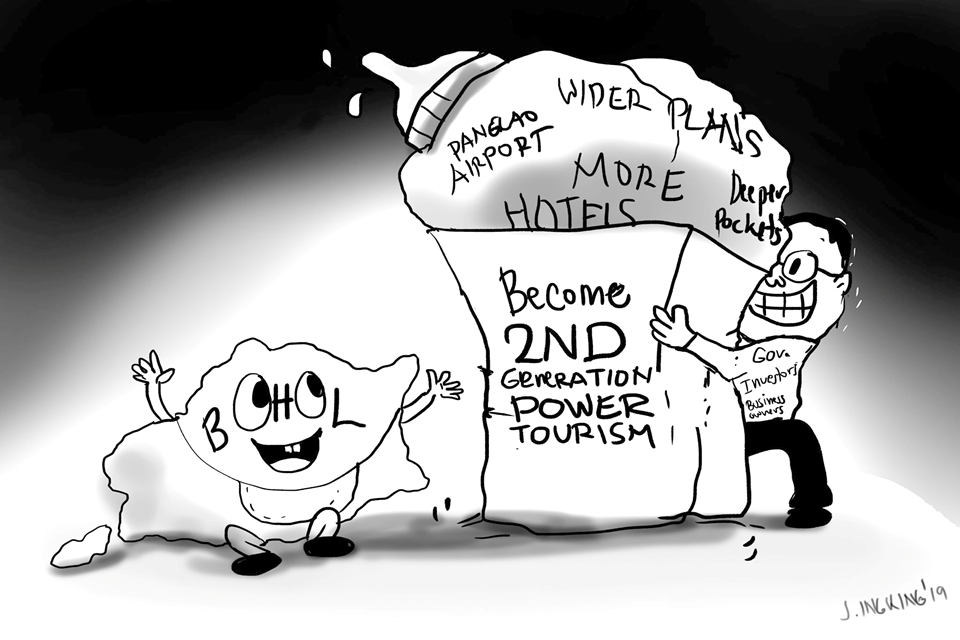 It is not just the DOT (Department of Tourism)  Regional Director Shalamar Tamano who publicly states the Bohol  Tourism is on a high-octane journey to greater heights of trajectory. Bohol remains as one of the most preferred destinations in the country- just look at loads of visitors of the airplanes landing at the Panglao Bohol International airport and the hordes coming down the ferries at the piers.

Seeing is believing, Watson. Since the airport in its full operating capacity can service 2 million visitors in a year, it stands to reason that in due time, God willing and with the right policies in sync, the prophecy that we can have more tourists than the 1.3 million registered Boholano populace, will be an accepted reality.

The closest comparison can be said of a Dumaguete City having more students than the populace during the regular school year and gets even-steven in the summer months as most of the out-of-the city students go home for a vacation break.

Back in 1995, there existed the tandem of then Gov. Rene Relampagos (31- youngest Philippine governor at that time) and Vice Gov. Edgar Chatto (35)  which drafted that historic vision and mission of Bohol as an eco-tourism destination- putting into flesh the original vision of the grandeur of a dream of forward-thinking former DOTC secretary and first elected Bohol provincial governor- circa post-Martial Law, Constancio “Nonoy” Torralba.

Newly-minted governor Art Yap, who belongs to a prominent, enterprising Chinese family in Binondo, on the other hand, is entitled to call the Rene-Edgar team as his version of the First Generation.

What Bohol is today, was probably not even in the wildest dreams of the leaders in 1995. But lo and behold, no one can argue success and Bohol’s stature today as a Tourism Superstar certainly started on the bedrock of the Rene-Edgar regime’s bible.

Twenty-four years later in 2019, Bohol was adjudged worthy of getting a spanking pro-environment international airport, dubbed as the first of its kind. Bohol is at the throes of the “Big Leap Forward” as we had fondly called it in the past in this page.

The newly-elected governor is in his perfect right to refer to himself as The Second Generation of Governance for Development and vows he will work similar to an appointed corporate CEO (Chief Executive Officer) – but of Bohol whose main agenda is to expand the numerous opportunities and bring economic prosperity to the Boholanos. And expansion can, thus, become a buzzword.

One is tempted to stretch the analogy on a different plane.

We can start the narrative, aptly, with the name of the late hotelier Anos Fonacier in whose honor the circumferential road of Dauis and Panglao is named after. Ilocano-born, Fonacier, nonetheless, is honorably referred to as “The Father of Bohol Tourism”, who can be tagged as the virtual front liner of the First Generation by taking a risk on an almost unknown quantity in the island of Panglao.

It was his Bohol Beach Club which literally first introduced Bohol to the whole new world of tourism. It can be called the frontier- breaker that never looked back.

Part of the so-called First Generation in the tourism industry could be the late businessman Nanong Lim of Hotel La Roca, George Lao of Gie Gardens Hotel, Dr. Doloreich Dumaloan of  the Dumaloan Beach Resort, Playa Blanca of the Horas and the high-end Jul Resort of the Boisers.

Now, the Second Generation in this development tract are the bigger players- deeper pockets, ambitious business plans and a wider world-view of things. They include Johnny Chan of Bellevue  Hotel whose landscape, location and 5-star amenities – had always been spoken with superlative praise from many visitors.  Plus, of course, Henry Chosuey of Hennan Resort, the late Boholano Consul Dodong Alegrado of Bluewaters and Grand Benedicto of Be Grand Resort. In the local front, Marlito Uy of South Palms and Fred Ong of Mithi.

One of the latest entrants in this Second Generation group is Justin Uy of J Park who will be building 1,100 rooms in a water-themed park that can be a “game-changer” in any sense of the phrase. Now, we have a new player which offers a new blend- let us say, James Bond saying” stirred not shaken” of his favorite drink. A different species, altogether.

New in the sense that aside from the regular fare of a resort, it offers a strip of a mall that will include restaurants, bars and souvenir shops. It is a one-stop haven of everything a tourist would like to have after savoring the wonders of a blue sea and a strip of whitish sand. Located in Doljo, Panglao, just off Bellevue Hotel, will be the Modala Beach Resort with Moadto Strip Mall headed by a group of entrepreneurs with Engineer Manny Mendoza at the helm.

The Second Generation in the Tourism Loop can be around for a long while- its tenacity only equal to the resolve it is willing to impose in making the resorts competitive. Let us not forget that we are not just competing with each other in Bohol – but with the rest of the islands in the Philippines, as well – all angling for strategies to draw the third-largest dollar earning industry in the country into their respective beneficial shores- Tourism.

Staying competitive means not pricing above its own level of industry tolerance and not violating the logic of the “value-for-money” tourism tenets. And being respectful of the Environment whose neglect will destroy the so-called Goose that lays the golden eggs for all tourism players.

For governance, it means proper zoning and planning of the sites, peace, and order and sanitation and that the basic infrastructure of any tourism: adequate and cheap power, available potable water, fast internet services and paved roads with all sorts of alternative transportation available at all times for all types of visitors.

Not doing this basic business and governance arithmetic and science principles could be tragic for both the Governors and the Industry Players. Not doing that will result in the hordes of hungry, voracious locusts descending upon the dead carcass of the industry – murdered by our wrong policies and bad business moves.

And, thus, with that- the dreaded “Third Generation phenomenon” – a curse, actually- shall swiftly have come to pass upon our tragic selves- with no one but ourselves to blame by then.

Let us not let this happen in our lifetimes.