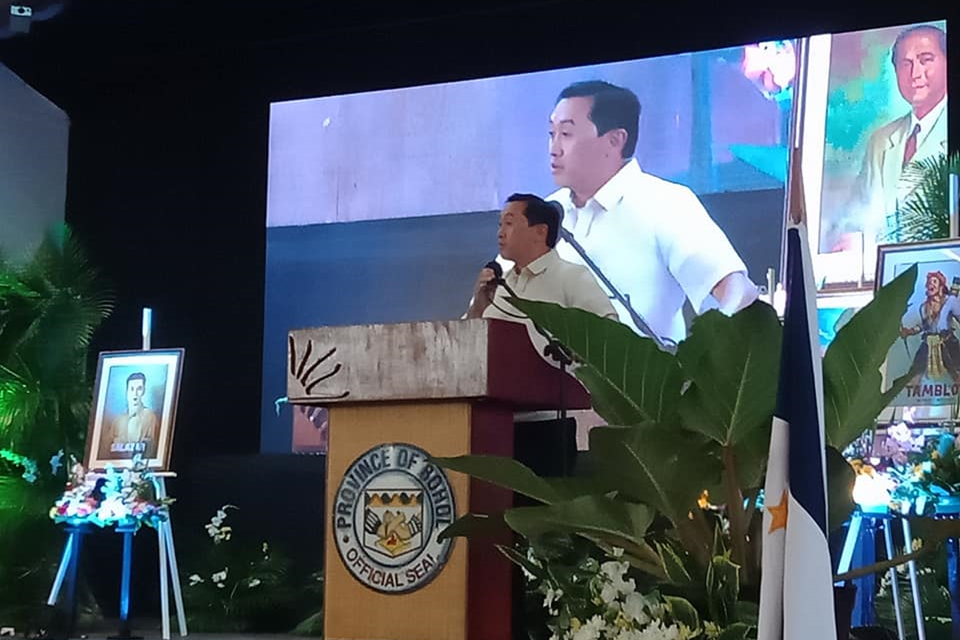 Governor Arthur Yap on Monday highlighted Bohol’s economic progress over the past years and his government’s bid to elevate the province as a top tourist destination in the Southeast Asian region during the commemoration of the Bohol Day, the first under his administration.

Yap however emphasized that although Bohol, a “conservative” province, is poised to experience economic growth, it will not leave on the wayside its culture and traditions.

“We are a community that is looking towards the future and yet clinging on to our traditions,” he said.

The governor, for the second time since officially taking over the helm of the Capitol, publicly owned up to his being a non-Bohol native.

He said that the province has undergone many changes over the decades and one of them is having a governor who is a Boholano “by choice.”

Yap, who delivered a similar statement during his inaugural speech on June 30, was heavily criticized by the camp of defeated gubernatorial candidate Leoncio Evasco, Jr. for not being a “true Boholano” during the months leading to the fierce gubernatorial race.

The governor also vowed for the province’s progress to be felt by the poor and the most “vulnerable,” as he aims for the economic advancements to trickle down and plans to extend direct aid. Yap noted that one of his priorities is to establish desalination plants in the far-flung island villages of the province where, according to him, communities pay “P50 per gallon” for water.

“I have given order to the provincial government that we must bring in desalination plants to the islands and we are going to do that before my 100 days are up,” he said.

The 165th Bohol Day was celebrated through a simple ceremony which was also attended by Bishop Abet Uy of the Diocese of Tagbilaran, Vice Governor Rene Relampagos, members of the Sanggunianag Panlalawigan, other officials and government personnel.

Bohol’s three congresspersons, Rep. Edgar Chatto, Rep. Aris Aumentado and Rep. Alexie Tutor however skipped the event as they flew to Metro Manila to attend the first session of the 18th Congress and President Duterte’s State of the Nation Address at the Batasang Pambansa in Quezon City.

Miss Bohol 2019 Celina Villoceno, who represented Tagbilaran City, and other winners of the pageant were also in attendance. (RT)