Raising the bar for Sandugo festivities 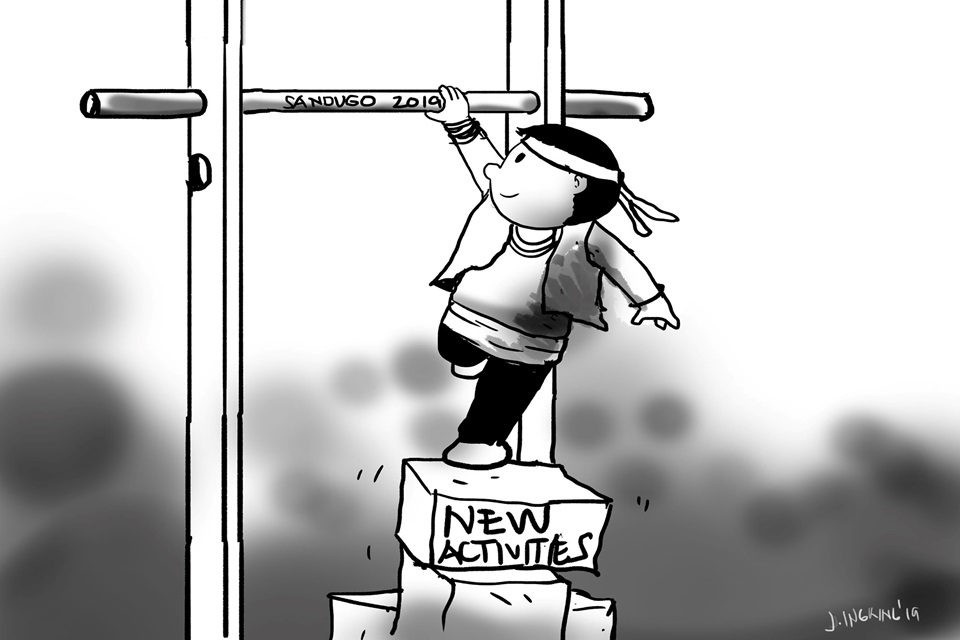 Raising the bar for Sandugo festivities

Hotels and restaurants,  nay the entire Bohol hospitality business, was in the highest gear this July. From July 1 to the present, airplanes and ferry boats have been bursting at the seams with visitors- but mostly Boholano balikbayans (and those residing now in other provinces and cities here) descending like a flock of pigeons to their homing nests in the province.

To many, seeing the signature tourist sites like the venerable Chocolate Hills, the enchanting Loboc and Loay riverboat escapades and, but of course, the grandeur of the Panglao beaches- now shadowed by the emergence of that long stretch of fine sandy beach in Anda- is even better the second and third time around.

But many times, the places multiply in significance and beauty mainly because of the company one kept in visiting these places. July, truly, has been “reunion time” -for classmates and clans, a bonding that brings both laughter and tears in remembrance of things and people who have gone by. Even weekdays were not exempted.

A classic example was the recent Borja Clan Grand Reunion, which after 20 years, pulled together like magnet close to 700 clan members from all over the globe- many  not having seen the others for years and decades; some realizing they were, after all, relatives to a certain degree and confident the Borja clan will move to longest posterity as new grandchildren are added to the clan matrix. The Bohol Cultural Center roared and thundered as the Borja clan bonded like long lost lovers.

And the scene was repeated in many houses, in many towns and barrios, losing none of the affection and warmth engendered by grand reunions. Local tourism had seen worse months than July, definitely.

The July month-long Sandugo Festival is a marked success, judging from the quality of the showcases and the warm reception by the visitors and the locals of the output. There were outstanding activities like the Sandugo Agricultural Fair, Sandugo Trade Expo (generating P40.7M in sales as of last night) and the Fusion Nights for culinary experimentation.

Frankly, Bohol needs to do more agri- fairs like the above- knowing that the rice farmers and even the coconut farmers need to diversify and tell the world of their new alternative products considering the hostile environment they thrive on now.

The  “Tagbo sa Tagbi” was applauded more for its huge respect for Bohol’s native culture which was highlighted during the event by some creative presentations. Some improvement, however, can be considered in terms of branding and indicating the proper prices for products- so there is no need to do Divisoria-like haggling to lower the prices. Moreover, some of the products came from out of the province, per their salespersons.

Like always, the Bohol Sandugo Beauty Pageant and Sandugo Song Festival- put forward in another dramatic fashion- the areas where Boholanos are not lagging behind any province- the pulchritude of the women and the musical talent of our province mates. By national standards, they can be competitive.

Class reunions are particularly special- wherein recalling the past only caused to sharpen the longing to relive those joyous, innocent yesteryears -all aching to push back the hands of time even for one happy moment. Some met, rather accidentally, their old elementary teachers who, once upon a shining time, inspired students to be the best they can be – whether in the languages, mathematics, history and the like.

The former students’ grateful eyes made up for the loss of words in thanking the hardworking, selfless tutors of old. They were indeed a potter’s hands that helped mold the clay that was in their malleable form.

But something else seems to be amiss.

That is bringing the already festive Sandugo Street Dancing to the next higher level- say, the level enjoyed by Bacolod’s “Maskara” Festival and Iloilo’s “Dinagyang” Festival which has merited the United Nation’s admiration and support as one “world-class festival”.

These two can be achievable reference points because perhaps, for now, we cannot match the level of Cebu’s “Sinulog” injected heavily with religious fervor for the iconic Sto. Nino which “Sandugo” does not have, with no excuses, of course.

“Sandugo” has yet to attract the foreign tourist market, content as we are with whetting the appetite of the Filipino local audience and the Balikbayans. Just what can be done differently?

From the marketing Four P’s standpoint, we may have to start with the basic P- the Product. We are no cultural gurus nor entertainment geniuses, but maybe we have to broaden the appeal to more submarkets from among the audience.

We have absolutely nothing against the “Kuradang” which is as Boholano as it can get – with the flair for speed and romance- combining the drawing power of martial arts (arnis)  and flirtatious romance of courtship among Filipinos.  The rhythm is vibrant and contagious.

We can maintain the “Kuradang” contest and then perhaps add a second wave of interpretative dancing by say, schools of tribal dances like that of the Eskayas and the less visible ones.

To get in the younger crowd, why not the provincial or city government donate colorful floats for a grand parade and invite celebrity stars who are currently promoting their upcoming or “now showing” movies or teleseryes as part of their promotional drives to grace such floats here for free? Even others from nearby Cebu and Negros might come over to catch a glimpse of their favorite stars.

The young Millennials can cap the evening with their own  dance-group showdown to showcase their own “present culture” in modern dancing  (still depicting the Sandugo theme of hospitality to foreigners) and finally laced with an honest-to-goodness mini-all-Bisaya musical on stage for all to appreciate even more  – the beautiful story of the “blood compact” of Legaspi and Sikatuna that has been the forerunner of Bohol’s now renown tourism hospitality business.

And by golly, wow, why not let a true blue Caucasian play the role of the Spaniard Admiral Miguel Lopez de Legaspi, for good measure?

We recall that it was the Department of Tourism that egged Bohol as a province to be the country’s featured festival center for the month of July- with a pledge of unequivocal support. During the time of DOT Regional Director Dawnie Roa, we remember the hundreds of posters from the DOT supporting the July Initiative.

From hereon is a full year ahead for our local cultural and musical maharajahs to brainstorm seriously how to develop the new “Sandugo” product for implementation next year. But soon enough, to be able to request funding from the appropriate agencies when the National Budget session begins this September.

Let it be known that even the New Orleans Mardi Gras has evolved to include both conventional or traditional dances with the more non-traditional ones and had taken a wider audience to watch and notice.  It is along that line that we propose a re-take of what the “Sandugo” one-month celebration should be, particularly the Dancing Event, the culmination of festivities.

With a “better product”, we will then collectively request the national and international media to make some noise about the “New Sandugo”   circa July  2020 as we move closer towards the next TBTK as well.

Needless to say, we need to ask endorsement from the amiable current Department of Tourism Secretary Berna Romulo-Puyat and our ally Regional Director Shalimar Tamano to give it one finishing kick towards July 2020 and beyond.

What about it, Watson?