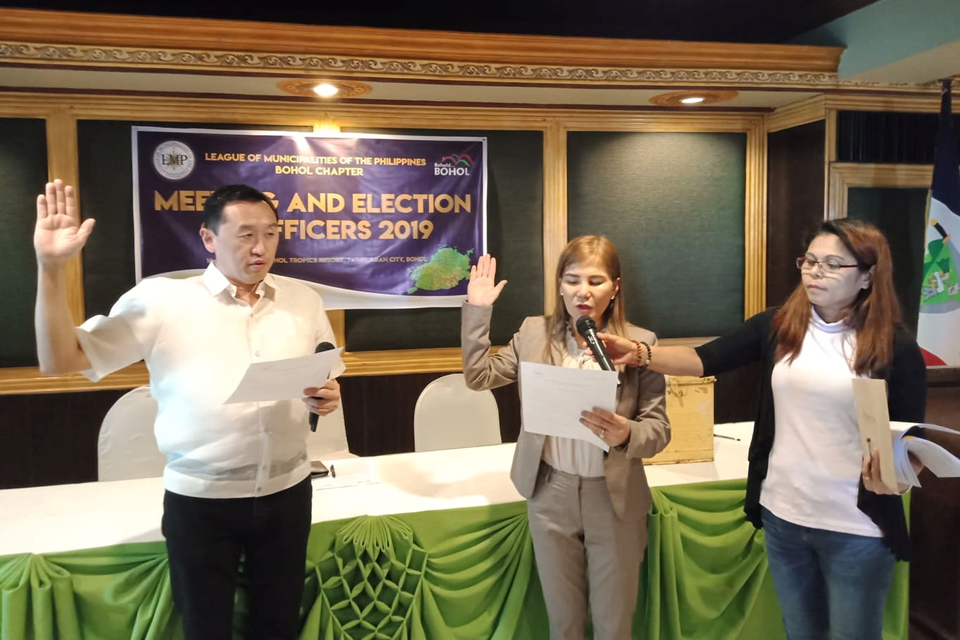 Dauis Mayor Marietta “Miriam” Sumaylo was elected president of the League of Municipalities of the Philippines (LMP) – Bohol Chapter, winning by a commanding lead over lone opposing candidate San Miguel Mayor Virgilio Mendez during the organization’s elections on Friday.

Sumaylo, who is the first Dauis chief executive to hold the LMP’s top post, garnered 34 votes over Mendez’s 11 votes following a “secret” casting of ballots by 45 mayors of the province at the Bohol Tropics Resort in Tagbilaran City.

She took oath before Governor Arthur Yap shortly after being elected.

All of the municipal mayors’ were able to vote except for Panglao Mayor Leonila Montero and Pilar Mayor Necitas Cubrado who are both serving suspensions. The towns’ vice mayors Panglao acting Mayor Brian Velasco and Pilar Acting Mayor Eugene Datahan attended the elections but were not allowed to vote as per LMP rules.

Sumaylo said that her main goal is to unite the mayors of the province who, except for Tagbilaran City Mayor Baba Yap who is a member of the League of Cities of the Philippines, are all part of the LMP.

Other elected LMP officials are as follows:

The LMP is the association of the 47 municipal mayors of Bohol which was previously led by former Clarin mayor Allen Rey Piezas, who is now the vice mayor of the town. (Rey Tutas)