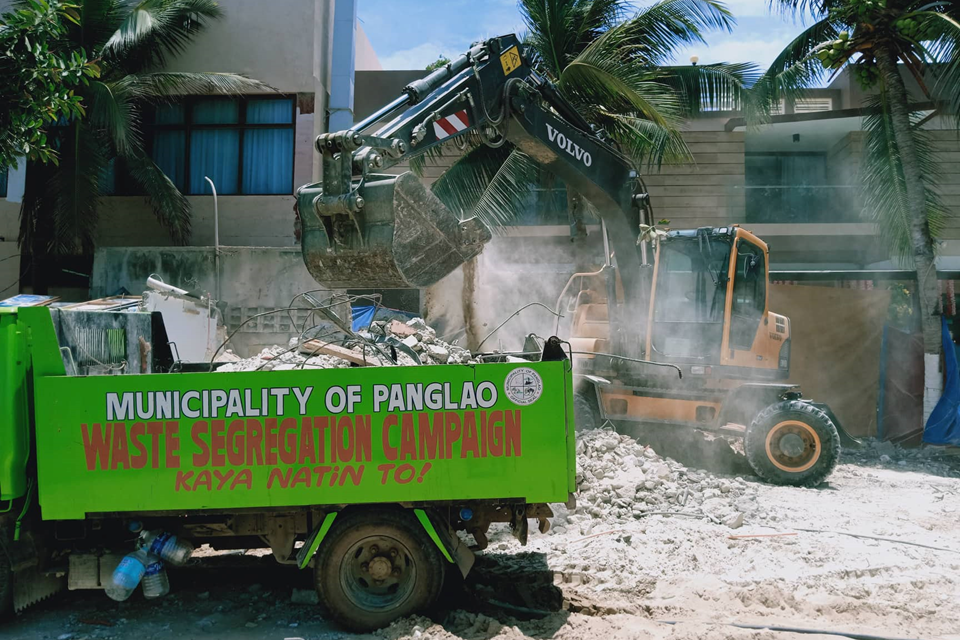 The ball is now in the Alona Beach resort owners’ court.

This is after the Panglao local government unit (LGU) under acting Mayor Brian Velasco completed on Tuesday the demolition of the Hera Greek Taverna, which has been deemed as the most glaring violator of the 20-meter easement policy along the kilometer-long Alona Beach.

According to Velasco, owners of other establishments within the easement zone earlier vowed to follow suit and voluntarily demolish their illegal structures after the Greek Taverna is torn down.

Demolition of the Greek Taverna was completed on Tuesday afternoon after the provincial government allowed the LGU to use its heavy equipment to speed up the operation.

Velasco said that other violators have started to voluntarily demolish their illegal structures including Lost Horizon, Isis Bungalows and Trudi’s Place.

However, Aquatica Beach Resort, Bohol Diver’s Resort and Diving King Dive Resort which also have structures that allegedly encroached on the easement zone have not done the same. Illegal structures of the said resorts will be subjected to forced demolition, said Velasco.

According to Velasco, they are observing that easement demarcation set in 2008.

The LGU will continue the demolition jobs until the easement zone is cleared of illegal structures, he added.

Operations to clear the 20-meter easement zone came after DENR Secretary Roy Cimatu inspected the Alona Beach and ordered the demolition of the illegal structures in March last year.

Cimatu gave resort and other establishment owners six months to demolish the illegal structures. Some businesses complied with the directive, while others, like the Greek Taverna, refused to demolish their buildings. (A. Doydora)