International airport with no planes 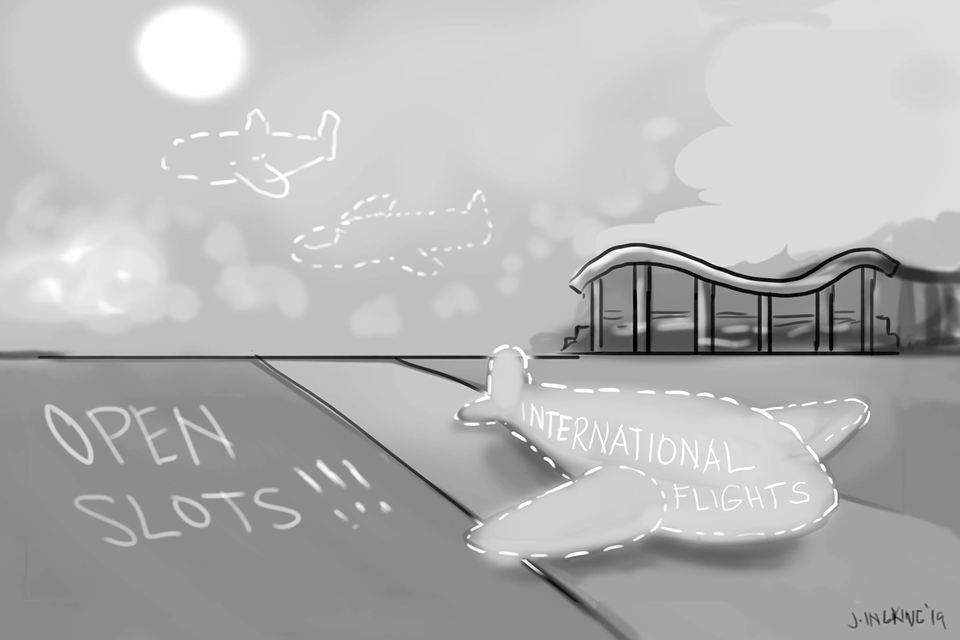 International airport with no planes

IT IS FRUSTRATING – and  only because we presume things to be in order, when they are not. It is as if we may have put the cart before the horse. An eco-wonder international airport  capable of processing 2 million visitors a year. Oh,wonderful.

On paper, yes, but only on paper.

The 10-month old Bohol Panglao International Airport is almost a year ago. Sounds global.But it only is as good as it sounds. Babies, human that is- sometimes can do more after 10 months on earth.

Because sad to say, since after President Rodrigo Duterte inaugurated the air terminal, there are no additional flights yet- domestic. And, worse even the daily international flights from Korea were gone when the air traffic moved from the small City Airport to the vast PBIA. What an irony?

What is so international about the airport, then? The Incheon, Korea direct flights were touching down at the short runway of the old airport. But when the new international airport opened, there were no more daily flights from Korea. What gives?

Is it because of the expensive room rates in Panglao that the charterer could not make both ends meet in their tour packages? This is what we heard and although it still needs validation, the fact that it is being spoken about -says there must be some grain of truth about it?

Likewise, Department of Transportation Secretary Art Tugade who has been bullish about the airport operations in the entire country said that since August 15- the navigational equipment were already completed; that  the airport is already night rated capacity or a possible extension of operation from 12 to 16 hours.

This indeed sounded like a magic carpet dream-  seeing a progressive new international airport germinating with activity in a small island destination such as Bohol.

But, again sadder to say, that while all these are said to have been done, there is no international airline that seems to be in  the offing to start its Bohol flights.  What is worse, there is no PAL, Air Asia and Cebu Pacific signifying to put additional flights despite the availability of landing area at the airport.

From the then one-plane policy, the airport has become so huge that seven planes can land at one given time.  But, where are the planes? Where are the airline companies?

The Bohol sales mission which recently went to Guangzhou in China gathered an A-1 information that China Eastern Airlines is gung ho on having its direct flight to Panglao. But, nothing seems to happen since they have not heard of any aggressive invitation for them to come and bring their planes even just for chartered flights as a starter.

Why? Because the new airport has not been awarded yet to the lone private sector bidder (Aboitiz Group), the airport continues to operate under the very limited scope and resources of the Civil Aeronautics Administration of the Phils. (CAAP).

The government operation is simply letting the   ordinary routine course of business- that present flights get in and out of the runway, the maintenance of the “empty” terminal building which has barely any respectable concessionaire like restaurants and other airport services.

This is so because CAAP is not equipped to do this. It has no logistics to finance a marketing campaign for airline companies abroad to come and field their flights.  In fact, we heard that CAAP even has no budget to pay salaries if they need to extend their number of operating hours. We must note that night flights will demand a huge budget for the manpower to handle the operations beyond the 8 hours.

Witness how the Mactan International Airport has succeeded in doubling its number of flights since after the takeover of the Megawide Consortium (GMR), and an Indian-run management group which continues to transform Mactan into a bustling airport.

Further, we heard that the Aboitiz Group is encountering some difficulties now that the processing of their intent to operate got stalled with the Department of Finance (DOF).

Even DOTR Sec. Tugade could not explain at length on why the delay of the turnover to Aboitiz which if finally turned over could likely transform this new airport into an international standard as what other airports should be- given the reputation for managerial and marketing excellence of that conglomerate.

Airports, as they say, are the gateways to the places and they always carry a lasting first impression. As we write, it is not a good one.

We do not know exactly where the bigger finger to fault someone should be directed to. What we are sure of is – there are a set, not one problem,that face the airport.

THE HARDCOURT MURDER – That the No. 13th seeded Italian national basketball team  dealt on RP’s Gilas Pilipinas last night is enough evidence to say that we will not make it to the next FIBA round. Sorry to the 70% of Filipinos who take up to basketball.

Too much basketball in a year. When we are competing in a year for an international tournament like the FIBA, Olympics or Asian Games, there should only be two-not three PBA tournaments. This is to give the national team at least two months to play together before facing the world’s best.

Retire the aging Andray Blatche-and we must at least have two NBA prime caliber players like a Jordan Clarkson and someone else in our team to compete well.

Hire a good physical conditioning manager- we often see Gila players -before and during official games- easily limping after physical brushes with the enemies.Whoa, we are not playing chess with the enemy, mister.

The forming of a national cage team should be handled by a committee of coaches, not just one coach. Of course, the loss of Jayson Castro (personal reasons) is a big one considering he has been twice chosen as Asia/s best point guard.

But bringing in an Almazan and a Ravena (seemingly Coach Yeng Guiao’s favorites) -even both are coming after injuries seemed ridiculous. If one considers, Guiao seem to have a personal dislike for Terrence Romeo, arguably the best one on one offensive player the country has and Calvin Abueva, the fiercest defender who gets the goat of the opponents’ best player. Both were left out of the team.

And why the fascination with a Gabe Norwood- who has gone past his prime years? He has become a liability, to say the least. And we have to develop new, young players with balls like a CJ Perez and Bolick who are not afraid to die inside the court compared to our pampered, rich PBA superstars.

We say, without fear of contradiction- that on Monday, another cage massacre will happen in our game vs Serbia- and do not even bet we are sure of disposing Angola on Wednesday.