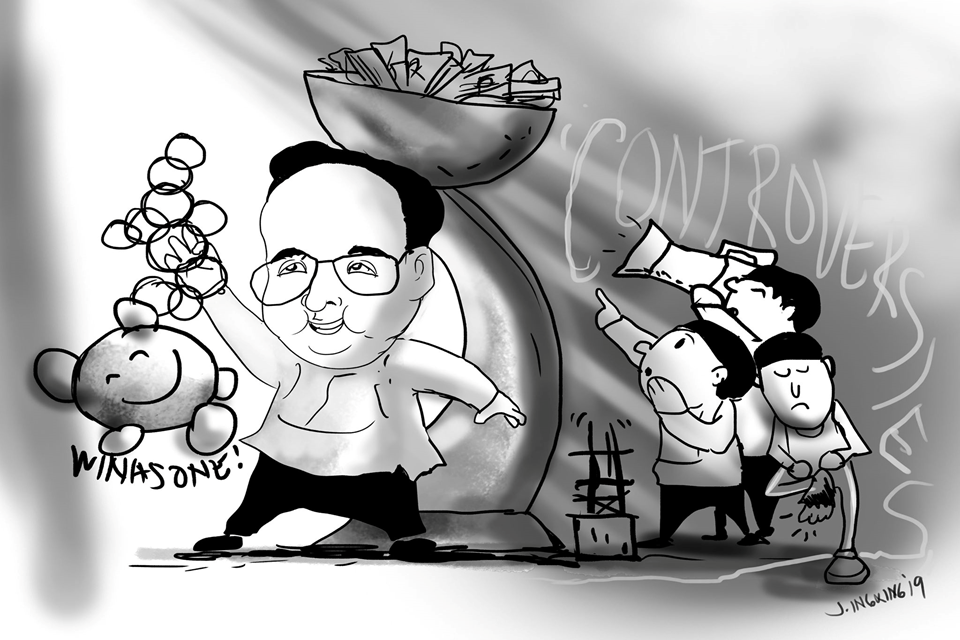 THE 3OTH SOUTHEAST ASIAN GAMES  started auspiciously yesterday November 30 (Bonifacio or National Heroes Day) until December 11. Who will be the heroes -and the goats?

The Philippines -playing on homecourt- can possibly be ASEAN No 1 or No 2 in gold medals earned. But will that ever cover the possible stench that may erupt over the developing scandal on the alleged incompetence and corruption of the host officials manning the games?

Often, it is always the guilty who will blame the bearers of bad news- namely, the local media- as the one instigating the panic over the pervasive boo-boos that occurred in the conduct of the sports event.

But the media organizations of the following countries: Cambodia, Malaysia, Singapore, Thailand and Indonesia had already publicly criticized the country’s handling of the SEA Games affairs with anger, frustration and spite over the fiascoes all over the event.

The Philippines has no valid excuse over many of the faux pas. First, three times before, this nation had already hosted this same event in the past. What’s new with the process.? Second, as early as 2017- we were already officially aware RP will be the host.

People cannot accept the yarn that some of such unfortunate events here also happened in the past in other countries- but it is only fools who do not read history and are naturally bound to repeat them.

Sure,  Manila and other cities in Luzon where the games are held must not focus the headlines on the “scandals” brewing over the SEA Games – so as not to “distract our athletes”.

Out here in Bohol-we can discuss them- with some wariness that the 12 days of the events where “media” is being quieted- if there are crooks behind the allegations- will spend that same “protected time” to cover their tracks while the investigations still have to happen after the games starting the earliest on December 12.

The noisiest among them has to be Speaker Alan Cayetano, who as chair of the SEA Games organizing committee seats on the throne where the buck stops. He has dared all critics to sue him and his group- threatening that if proven wrong Cayetano will likewise charge them in court for what- cyber libel or perjury?

Unfortunately, the most vocal institutions egging for a post-event investigation are the Senate and the Office of the President itself who has been bothered by the twin evils of incompetence and corruption on the matter.

Cayetano can not legally sue anyone in the Senate doing the investigation or is he telling us he will sue his own Boss? Presidential daughter Sara Duterte who never liked Cayetano as the speaker is wagging her tongue now mischievously with a smirk ” I told you so”.

In his embarrassment, the president had lowly humbled himself and apologized to the visitors and vowed he will surely investigate and let the chips fall where they should- including his allies- if warranted  – ” Yan and suwerte sa pulitika”.

Lack of timely transport, agonizingly slow hotel transfers, lack of adequate food, mixed press cards, atrocious press offices, and lack of care for the 1,500 volunteers can be rectified and apologized for.

But certainly, accusations of not providing halal food for Muslim athletes, overpriced materials, unfinished athletic facilities are not – and the P 50-M Cauldron in Clark City stadium (supposedly designed by the late national artist Bobby Manosa) is “Imeldific” considering that more than 21 million of Filipinos still live below the poverty line- is also not. Minority floor leader Franklin Drilon says that money could have erected 50 new classrooms.

Apologists point out that Singapore did their own cauldron at the higher cost of P64-M, forgetting the vast difference between the state of poverty and the per capita income of people between our country and that rich island nation.

Drilon also decried that the new sports facilities built by the billions of pesos have no planning for their future usage- that they could become grandiose “white elephants”- a monumental waste of scant public funds.

Cayetano tried to deflect the grand failures by saying it was the Senate’s fault for delaying the approval of the 2019 National Budget which caused a partial 2018 usage of a “Re-enacted Budget” in the first quarter of 2019.

But  Senate President Tito Sotto countered that it was the “unconstitutional”  pork insertions of the Lower House into the budget that snagged the budget approval’s freeflow in the senate.

Yes, by all means, let us shout our voices hoarse in cheering our Filipino champions in sports for 12 days -but after that, the nation probably wants clear answers regarding these questions or  puzzlement ( as King of Siam would say) :

1. Why was the initial  P7.5 B SEA Games budget “parked” at the Office of the Foreign Affairs Department ( once headed by Cayetano) when that foreign office has the littlest connection to anything remotely related to sports?

2. Why did Cayetano’s successor- Teddyboy Locsin throw the “hot potato” to the Budget Department and not to the Philippine Sports Commission who he “does not trust”. What does Locsin know about the PSC that we do not? The Senate should summon Loscin in their hearing. (The PSC is chaired by Butch Ramirez alongside four other Commissioners).

3. All edifices out of the SEA Games budget should be audited and see if the specifications costing corresponds to the published standard price for all government purchases per material.

4. Allegations of Economist- Rep. Joey Salceda that the P5-B Budget for the SEA Games lodged under the PSC is without specific projects designated- in other words, a “lump sum” budget allocation which is vehemently outlawed by the Constitution which requires a line item budgeting.

5. Allegations of Budget Expert Senator Ping Lacson that the channeling of the SEA Games funds  (P1.5 B) to a private foundation reportedly chaired by Cayetano is reminiscent of the Napoles P 10-B case- where public funds were illegally funneled into private foundations.

6. The report of Rappler that the P11-B main athletic center in Clark City- ( including a 20,000 seater stadium, 2,000 seater aquatic stadium and athletes quarters) is a joint venture between BCDA (Bases Conversion Development Authority)  and a Malaysian firm MTD Capital Berhad.

7. Further, that such Malaysian Company reportedly borrowed P 9-B  ( of the P11-B total cost?) from a government-owned  Philippine financial institution and that the BDCA Chairman who signed the JV Agreement is reportedly (per Rappler) Vince Dizon, who was once upon a time consultant to the office of Senator Alan Cayetano?

Sincerely, we do hope things are rectified and our visitors’ rage appeased in the course of the event ( we have prided ourselves as being “hospitable to a fault”) and that RP emerges as ASEAN champions.

But beyond the values of sportsmanship, camaraderie, discipline and excellence that sports competition honor, we should also give the same patriotic zeal to make sure that honesty in the conduct of public affairs and managerial competence also become requisite hallmarks of this same government.

They are mutually exclusive, Watson.