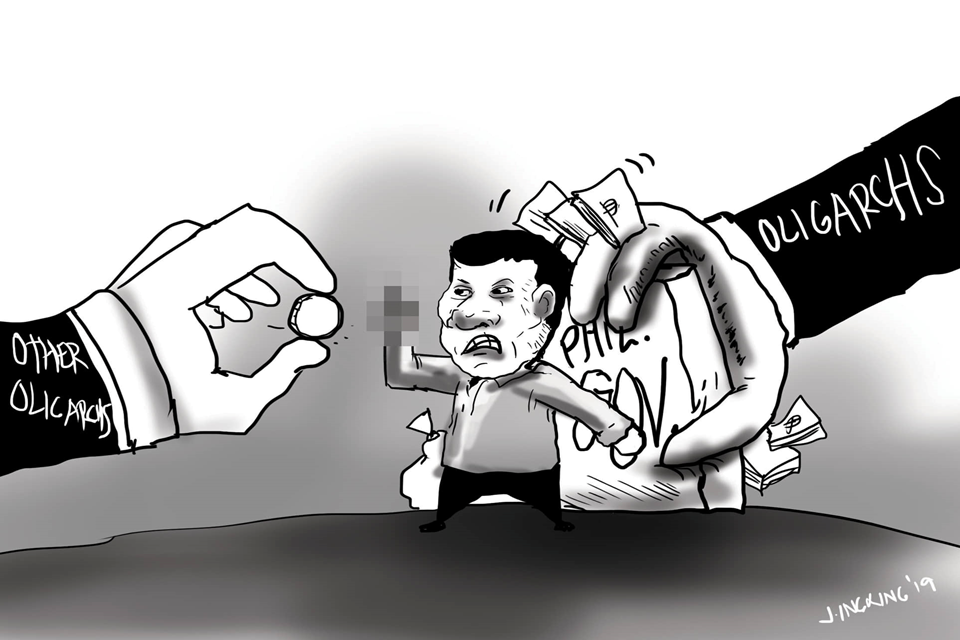 BUSINESS SHOULD HAVE read the lips of newly-elected president of the Philippine in 2016- Davao City mayor Rodrigo Duterte who said then that he looked at oligarchs as ” a cancer of society” and as “illustrious idiots”.

Of course, not all oligarchs. He was referring to those “oligarchs deeply embedded in government” in whatever administration and experts in “rent-seeking” – or the power to convert their influence into their beneficial contracts, franchises and monopolies with an advantage over the rest of us.

Especially those kinds of oligarchs- who had won those, partly through corruption, do not render the right service to the Filipino people.

Or do not pay the right taxes and government fees.

The first to fall was businessman Roberto Ongpin- a man with nine lives- who lived through as Marcos’ trade secretary, reportedly of the Binondo (alternative) Central Bank during the 1983-1986 crisis -and through Cory, FVR, Erap, Arroyo, and then Noynoy presidencies. Close to four decades of astounding influence-making him one of the nation’s richest.

Ongpin had expensive tastes in his investments often catering to the rich and famous. When he heard Duterte was on a warpath to his doorstep, he resigned as chairman of Philweb, his gigantic online gambling franchise and later sold it with a deep discount to Greggy Araneta, married to Irene Marcos, youngest of the Marcos children.

It sent a chilling message to Big Business that “rent-seeking” as a business model for success here would become a thing of yesterday.

Thor’s hammer blows went next on magnate Lucio Tan whose PAL (Philippine Airlines) was required to pay the government P6-B in unpaid navigational fees or Duterte will close NAIA 2. Before the December 2017 deadline, Tan paid up. They are now friends.

Next came the second-largest cigarette manufacturer in the Philippines The Mighty Corporation ( of the Wong Chu Kings) who had to sell part of the company to Japan Tobacco in order to settle P 30-B in unpaid excise and documentary stamp tax and P10-B in income tax- to continue operating.

The sin taxes affecting beer and liquor and cigarettes (affecting many companies of tycoons) soared past quickly at Congress- no lobby money could dent the surge of public opinion for its approval.

Damning the poor internet connection ( often seen as one of the world’s slowest and most expensive) of the telecommunication industry dominated by Globe (Ayala) and the Pangilinan (PLDT-Smart Group), the government opened the doors to a third telco with Davao-based businessman Dennis Uy’s Miscatel teaming up with China Telecom.

The president was peeved at the poor service and expensive rates of what people sensed was an unfair duopoly (controlled exclusively by just two parties)in the telecom industry.

The recent controversy involved the so-called “onerous” Water Concession Contract (signed in 1997) between the government and -once again- the Manila Water (Ayala) and Maynilad (Pangilinan) groups – ( Read: “One Voice” column this issue).

This was sparked by the “water crisis” in recent months in the Manila-Rizal-Cavite (their franchise areas) while many terms in the agreement were described by the government Department of Justice as disadvantageous to both government and the water-consuming public.

The government said it will not pay the P11-B arbitration fee order from a Singapore Arbitration Court to pay the two firms, rescinded the concession extension (to 2037) and threatened to file “economic sabotage and plunder” against the two concessionaires and their conniving government lawyers and principals.

The most recent wrestling episode was when the water firms threatened to increase water rates (more than 100%) without regulatory approval, Duterte countered he will use the military to take over the water firms and run it for public usage.

Duterte, of course, has his favorite pet peeves as most presidents have.  Critical media like ABS-CBN  (Lopez Group) he vowed will not have its franchise renewed when it expires in March 2020 and the Philippine Daily Inquirer owners (Prietos) were grilled over burning coal about some real estate tax liabilities of their Makati mini-mall.

One of Duterte’s campaign promises also was to end the so-called ENDO (End of Contract) employment arrangement which tends to allow big firms to avoid paying (Philhealth, SSS, and other benefits) to workers by keeping most employees under a contractual basis for only six months. Later on, Digong relented and said some jobs can be outsourced and subcontracted.

But employers now are more careful or they could be brought to the DOLE (Department of Labor and Employment) for similar such violations.

Some observers note that the President is not going in a hammer and tongs mode against Chinese taipans like the Henry Sy and the John Gokongwei groups. The two are known to be very high on philanthropic inclinations- and part with a huge chunk of their wealth for public welfare.

The Gokongweis, or instance, are known to break into territories that make certain services and products affordable to the common man: starting with the UNLI features of their original Sun Cellular, budget-no-frills travel with Cebu Pacific and cheap hotel with SOGO.

Duterte had attended the wakes of the several members of the Sy and Gokongwie families. Big John Gokongwei – a decade ago- already disposed of one half of his personal net worth for educational scholarships. So, it is not all oligarchs that Digong sees red in- per se.

So, who is next in the pathways of the rampaging chariot of fire that is President Digong among the oligarchs here?

The book “Why Nations Fail” and another literature point to the following elements that make nations dysfunctional and widens the separation between the rich and the poor: crony capitalism (rent-seeking oligarchy), corrupt bureaucracy, political dynasties dispensing privilege and favors to allies and criminal syndicates in cahoots with powers-that-be ( warlords, drugs lords, smugglers, etc).

The Economist Magazine, one of the most prestigious business and economic magazines, does a year on year ranking of nations with the worst form of Crony Capitalism.

Over the last decade, the Philippines appears to be always on the Top Ten in the  “pervasive cronyism” list- growing worse by the year. By 2019, RP was 3rd worst-just behind  Malaysia and Russia -coming down further from No 5 in 2018.

Does this mean that the old cronies and new ones- are more and more embedded now in government (than ever) and still corner most of the nation’s GDP growth to the exclusion of the masses?

Notice that the drop in the poverty level of the nation to just 16% now  (or about 16 million Filipinos) is significantly due to government intervention like the Monthly subsidy (PPP) to the poor and the slight improvement in population growth.

And not primarily because an equitable distribution of wealth has become more pronounced among the haves and the have-nots.

It makes one understand why the Government, therefore, breathes fire in the nose when it sees the rich- abuse their wealth and privilege – to the detriment of the poor and government fiscal needs.

Or both- at the same time.

It seems the fight of Government versus the wrong kind of oligarchy will be the Main Event (still) of the populist side of this Duterte Government.

Of course, good governance has many other sides to it.