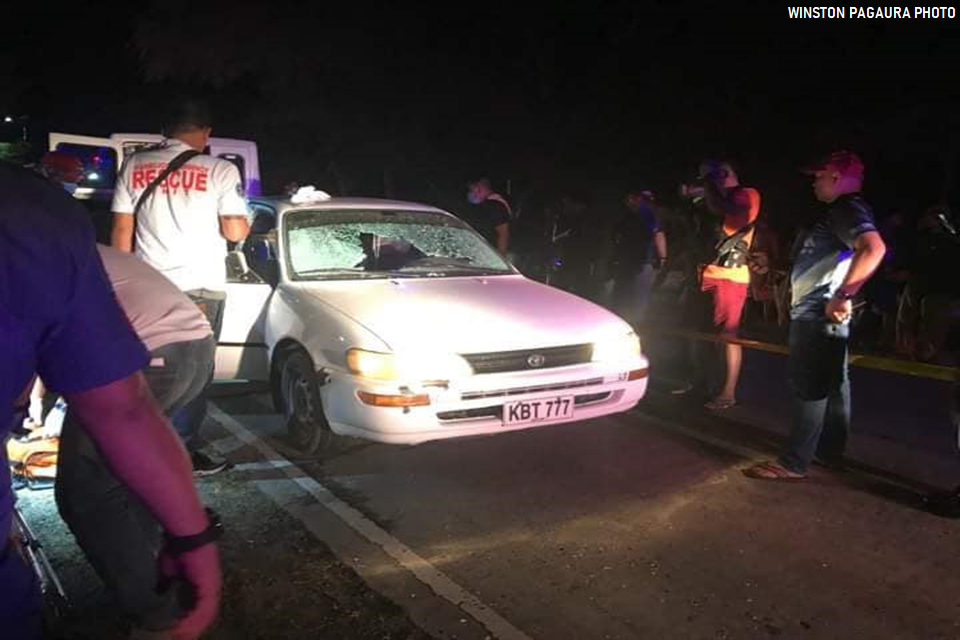 A corporal of the Bohol police Provincial Mobile Force Company (PMFC) was killed while his wife, reportedly a social worker, was injured after their sedan was peppered with bullets by still unidentified assailants armed with high-powered rifles along a national road in Maribojoc on Monday night.

Bohol Provincial Police Office (BPPO) director Col. Jonathan Cabal identified the fatality as Corporal Arnel Bayot who was assigned at a PMFC detachment in Ubay and the other victim as his wife Richelle Bayot.

According to Cabal, Arnel, 37, was still rushed to the Maribojoc Community Hospital but was declared dead on arrival while Richelle, 26, was taken to a hospital in Tagbilaran City after suffering gunshot wounds in her leg and arm.

Captain Fortunato Villafuerte, chief of the Maribojoc Police Station, said that the gunmen were likely trailing the victims, who came from Tagbilaran City and were on their way to Tubigon when they started shooting at Arnel’s moving Toyota Coralla in Barangay Guiwanon.

The vehicle was shot from the rear end and the driver’s side where Arnel was sitting.

Some reports indicated that the gunmen were riding a grey car while others said that they were on board a motorcycle. Villafuerte said however that they were still verifying the information, particularly as the fatal gun attack happened in a dimly lit area.

Villafuerte said that Arnel came from the BPPO headquarters in Camp Francisco Dagohoy in Tagbilaran City and was on his way home to Tubigon when they were attacked.

Meanwhile, police were still facing a blank wall as to the motive and identity of the suspects.

They have also yet to determine the exact number of suspects, but Cabal noted that multiple suspects carried out the fatal gun attack.

According to Cabal, they have launched a deep probe on the case while police stations surrounding Maribojoc have been directed to launch “dragnet” operations in efforts to catch the suspects.

Cabal said that the victim was formerly assigned in Talisay City before being reassigned by former Police Regional Office 7 director Brig. Gen. Debold Sinas to the Bohol PMFC.

Richelle’s wife who is now in stable condition is reportedly an employee of the Department of Social Welfare and Development in Bohol.