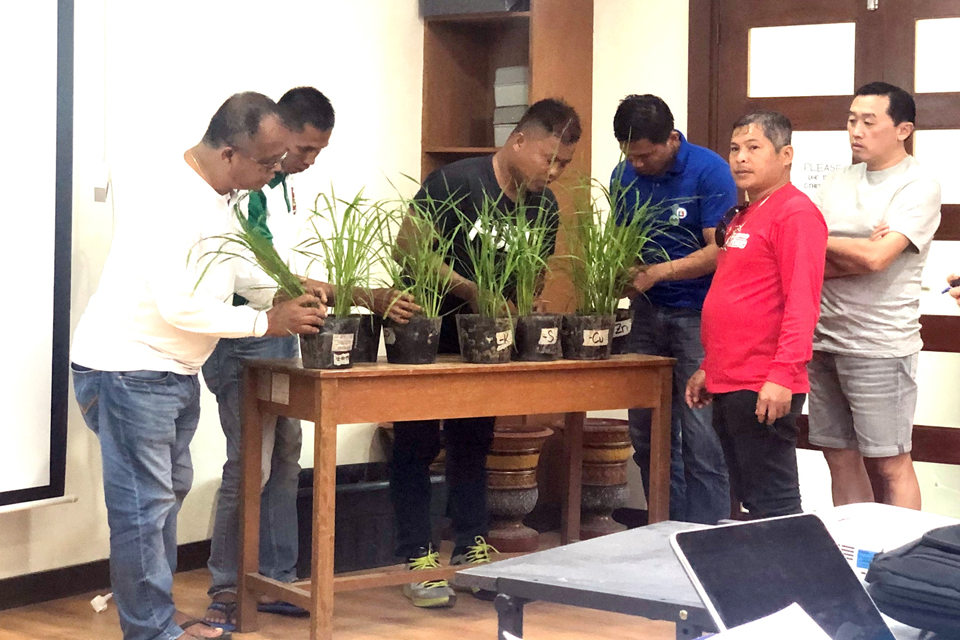 Climate change, which has the water supply problem in tow, is the biggest challenge that Bohol farmers face today.

This was aired by municipal agriculture officials, local farm technicians, and rice technicians from Bohol who attended the technical training and planning sessions at the Central Experiment Station of PhilRice in the Science City of Munoz, Nueva Ecija on January 8-12.

The program will be matched with an integrated water impounding-waterworks project that calls for the cooperation between the municipal local government units and the provincial government.

The MAOs of Talibon, Pilar, Ubay, and San Miguel, farmer technicians from Carmen, Jagna, Candijay, Alicia, Batuan, Dagohoy, and Catigbian joined OIC Provincial Agriculturist Dr. Larry Pamugas, and officials of the Pilar Rice Processing Complex and National Irrigation Administration in discussing how to increase the yield to 160 cavans per hectare amid the problem on water supply.

Together with 50 rice production stakeholders, they signified a commitment to the implementation of Advanced Rice Technology (ART) Program as pioneering movers.

The program is also in response to the national call to increase rice production and ensure food security for our people in the face of trade liberalization and climate change.

For his part, Gov. Art Yap said that: “the weakness of Bohol’s rice program lies not with our farmers but in its program management.”

“Rice cannot be grown in small patches and divided amongst political subdivisions like municipalities. Rice grows well depending on water, land, seed and input management. If the technicians and the farmers are together managing the production in a systematic way, then there is a chance for inbred seed production to produce more than 120 cavans per hectare and more than 160 cavans per hectare for hybrid seeds,” according to Yap.

As part of the workshops, participants were given sessions in PHILRICE digital application programs where technical data can be downloaded from SMART devices as well as briefings on the national Rice Competitiveness Enhancement Fund Program. Participants were also given hands-on training on the Minus One Element Technique (MOËT) to determine the correct inputs for our farmers to use in their clustered production areas. More than 200 MOËT kits were distributed to technicians so upon their return to BOHOL, they can begin doing baseline studies on the soil quality and input needs of their specific program areas.

The participants also committed to enroll the following areas and seeds systems to the ART Program of Bohol: Dry Season 2019-2020, Hybrid 1,000 hectares and RCEF Inbred 2,000 hectares. For the Wet Season 2020 planting period, 5,000 hectares was enrolled  initial municipalities are now counted as the pioneer municipalities who are joining this Provincial rice production program.

“Now let us see how serious the national government agencies are to meet Bohol farmers half-way. We are doing our part to answer the national call to increase food security for our people while lowering rural poverty for our farmers through increased productivity. But is the national government really serious in its efforts? Where is the support for irrigation facilities, check dams, water impounding projects? Is the landbank ready for the buy-back program? What about DBP and its commitment to provide inputs? The law says that RCEF must provide 10 billion pesos worth of support for our rice farmers and since Bohol is producing Central Visayas’ rice supply covering Bohol, Cebu, Negros Oriental and Siquijor, the amount is about P400-million worth of infrastructure and inputs support. We hope the national government agencies will not fail our farmers as Bohol stands ready today to pick up the challenge.”

Yap considers as a reference, the study on the five big sources of water in Bohol that serve 18 municipalities.

This is based on the final report on the Bohol Water and Sanitation Project conducted by SCHEMA Konsult, Inc. for the Engineering and Development Corporation of the Philippines (EDCOP).

Embarking from this output, Yap suggested to the mayors of Bohol to invest in waterworks projects in their respective areas.

In EDCOP’s study, the service areas were clustered and a water source closest to them was identified “to minimize and optimize investment costs and to be able to arrive at bulk water supply system designs that are both technically feasible and financially feasible”.

In the study, the Loboc cluster covers Alburquerque, Baclayon, Corella, Dauis, Loboc, Panglao, Sikatuna, Tagbilaran and possibly, Lila and Loay which will be supplied with water from Busay Falls and Loboc River.

The Balilihan cluster covers Balilihan and Sevilla which source will the Bugwak Spring and Loboc River.

The Antequera cluster covers service areas in Antequera, Maribojoc and Cortes which will get water from Viga source and Abatan River.

The Catigbian cluster covers Catigbian and San Isidro which will get supply from Sampilangon River.

The Loon service areas will get water from Moalong River in Loon.

In addition, Yap shared that the municipality of Jagna had agreed to be the source for a cluster of areas proximate to the town.

Yap emphasized to the mayors that their development plans should leave an impact on the lives of the constituents.

He also shared that he had observed during the campaign period that poverty still prevails in the hinterlands and island barangays.

Providing them with reliable water supply will capacitate the households to embark on important economic activities, aside from making their daily lives better and preventing certain diseases.

The study on the Bohol Water Supply and Sanitation Project which started in 2014 is for the crafting of the Bohol Integrated Water Supply System Master Plan (BIWSSMP) 2010-2035.

The provincial government requested for the study, for which the Asia Foundation- -through the “Advancing Philippine Competitiveness (COMPETE) Project” funded by the United States Agency for International Development (USAID)- -provided “technical assistance in the procurement of Consulting Services for the Feasibility Study for the Bohol Water and Sanitation (BWS) Project”.

By then, as found by COMPETE Project, “about 15 percent of the total in urban areas and up to 45 percent in upland municipalities were still unconnected to water supply systems and had to draw water from neighbors’ connections, barangay wells (Level I), natural springs, private wells, and/or water vendors”.

It was noted by COMPETE Project that “in many of these sources, water is intermittently provided and is of doubtful quality which contribute to the significant incidence of water-related diseases, such as diarrhea and gastro-enteritis”.