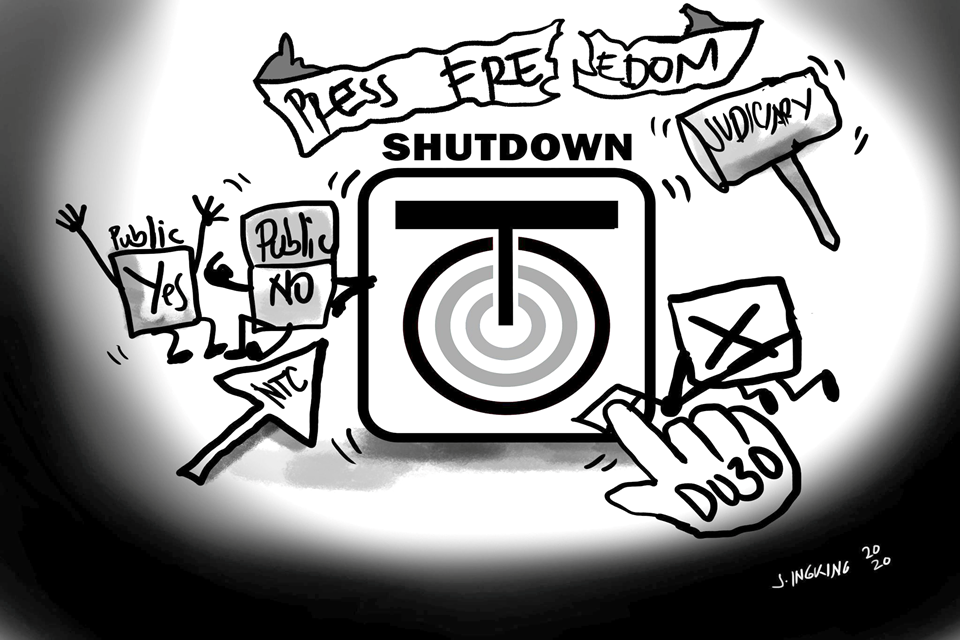 UPON WHOSE HANDS  does the fate of the powerful ABS-CBN Network depend upon?

The President, Congress, the NTC (National Telecommunication Corporation), Senate, the Judiciary or the Public?  The Network does not lack spokespersons to defend its cause- ours here is just an opinion on the matter.

This Editorial also conveys the results of the top-rated “Inyong Alagad” program of sister station dyRD where 87% of the Survey respondents (independently called) believed that non-renewal by the government (from whatever branch) of the ABS franchise is a curtailment of the “freedom of expression”.

It would appear, the pulse of the radio audience say, that all the agencies of government acting on the case will be doing so in unison/sympathy with the personal pique of the strong-willed President Rody Duterte who had earlier accused the network of bias and partisanship and for not airing P2.6M worth of paid Duterte network advertisement during the 2016 presidential polls.

At one point, the president threatened not to “renew ABS-CBN’s franchise” and said that it would be better for their owners to sell out to another group. The issue of the citizenship of Chairman Emeritus GabbyLopez was even questioned in the full knowledge that media here must be 100% Filipino-owned.

The public seems to see (maybe not orchestrated) but a common drift among the government moves. The Solicitor General first filed a quo warranto petition in the Supreme Court citing the use of the PDRs (Philippine Depository Receipts) and the erection of a  Pay-for View station outside ABS-CBN itself-both it branded as illegal.

While many other franchises recently passed the Lower House, the beleaguered network’s application for renewal sat in the archives and its franchise expiry date menacingly close as in May of this year. All of a sudden a Tower of Babel besieged the nation.

Whereas before, it was customary for NTC to allow networks to continue operations pending franchise renewal as long as it had applied before the expiry date, the NTC suddenly required Congress to approve a provisional extension pending issue deliberation.

The  Senate (on its own) studied the issue officially and was ready to render a provisional extension prompting  Speaker Allan Cayetano to call the senators “sipsip” (sycophants). The Supreme Court, for reasons it only knows, refused to act yet on the quo warranto and the proposed “gag order” on the issue requested by the Solicitor General.

While the three branches of government did their own legal Ali Shuffle to suit their own needs, the public was keenly watching the issue.

After all, by far, the network had provided them (for years) the cheapest (free) entertainment on TV all year long -that made their miserable lives bearable. ABS CBN knew the power of popularity and had housed expensive talents paid fixed salaries (allegedly) every year regardless of whether they get assignments or not.

Collectively, they had followers by the teeming millions from Aparri to Jolo some of them willing to die for their Lodis (idols, old friends). Our cook kept pestering us daily if ABS will die because a big part of her will die, too- it is perhaps a single but a representative feeling of the “masa of the madlang people” across the nation.

The government appeared courting for the masses’ disenchantment-then perhaps later anger-which is all bad timing with the Covid-19, Taal eruption, water interruption and the trade wars going on. The national temper was turning very ill.

While news slants and personal biases of talk show hosts are normal, this particular alleged crime against the network was not perceived as preponderantly such by the majority of viewers. Our real media test of legitimacy- is to be currently read, viewed, or listened to by one’s audience.

In this regard, ABS was not superior but was more than acceptable to most people. The emotional side of the battle, therefore, was clearly in favor of the network- by far, the most popular in the nation today.

There was, of course, the legal side of the battlefront- which appealed to the AB market and the intelligent Middle Class, the conscience of any successful revolution.

In our readings, it seems the use of the PDRs is a legal one – and practiced quite extensively. A PDR is just a cash deposit (foreign or local) with a receipt to allow an entity to raise funds without ceding control (because the deposit holder is not an owner) nor a lender (since there is no obligation to pay interest) for keeping the money.

That is why the PDRs never appears in the balance sheet of the receiving company- being neither liability or equity. Thus the foreign PDS owners (not being shareholders)  cannot control the network and not exercise voting rights and will only receive dividends (not interest) if the network may decide unilaterally in a profitable year. Thus, it appears, the network did not commit the foreign ownership of media prohibited by law.

As to the Pay-for-View entity, it appears there is a preponderance of similar scenarios obtaining with other entities to reasonably conclude about its being legal.

On the other hand, in the Senate Hearing, the pleasant network president Carlo Katigbak publicly- and professionally sought an apology for the non-airing of the president’s advertisement and offered to return the P2.6m.

The president calmly accepted the apology, politely asked the network to just deposit the money to a charitable institution and asked Congress to proceed with the hearing of the franchise and guaranteed his “non-interference.”

The final “peace chant” came from the favorite presidential child- Davao City mayor Sarah Duterte-Carpio saying she and the city supports the network and that the president’s heart can be touched by the prospect of 11,000 network staff and their dependents (55,000 total)  losing their source of livelihood at this time when the nation and the whole world are in the midst of a crisis.

Whatever the final outcome of this ABSCBN saga will be- what is obvious is that the voice of the people matters. So much power resides there. And one must never underestimate it.

And an astute leader who reads the masses like a palm of his hands will never ignore the handwriting on the wall. For good leaders do not always lead- sometimes, they follow.

And by following, they continue to lead. Is Duterte that kind of leader, in the least?